This is Elora. She's a nice girl.

This is Pettles. She's not. 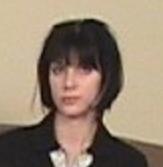 Pettles ended up going out with a guy that she knew Elora was interested in, and a thoroughly pissed-off Elora challenged her to a stripping game on camera, with the video of the naked loser posted to the Internet. Of course, the loser of that game wanted a rematch, and one thing led to another... see more (much more) of Elora and Pettles in the near future.
Posted by Red at 6:59 PM 19 comments:

I'd like to sincerely thank the 14 people who contributed (one who contributed twice) during my donations experiment. I'm very grateful for your support. As I said below, the experiment is now over and I'm no longer soliciting donations... you can download high-resolution and low-resolution versions of Ashton and Mia's strip rock-paper-scissors video without the donation nagging. You can also download Ashton and Mia's strip Operation game as a ZIP file, as well as Mia's interactive RPS. Feel free to distribute them to whomever you'd like. (You must be 18, legally able to own adult content, etc.)

I've learned what I set out to learn. LostBets.com will continue, but there will be no substantial updates for awhile while I build up my library of content and prepare to relaunch as a commercial venture. (As I hope I made clear, there was absolutely no quid pro quo, express or implied, for those who donated... this was necessary to comply with PayPal's policies regarding adult-oriented digital content. Nevertheless, those who were kind enough to donate may find themselves getting a few little extras along the way. If you'd rather I not send email related to LostBets.com to the address of your PayPal account, let me know at once.) Please continue to read this blog (or subscribe to the feed) to stay tuned to future updates.
Posted by Red at 2:39 PM 10 comments:

The Four Questions, plus: the future is in your hands!

First off, guys, I'm way behind in my email. If you've sent me mail and haven't gotten a response, I do apologize, I'll get back to you within the week, I promise.

Second, I was asked four questions in the comments section of my last post... which is pretty appropriate for this time of year (and if you don't know what I'm talking about, well, obviously you're goyische.) Answers:

1. Does this mean no more updates until the fall?

Maybe. See below, in the "future in your hands" section.

2. Is this the end of the free material?

3. Will we be seeing more of Ashton?

Yes. In addition to the Operation game (which I still may release as a video), Ashton and Mia played Strip Twister, Strip Battleship, and Strip Jenga. Plus, I got material for an interactive RPS with Ashton similar to Mia's. All of this will be produced at some point... probably.

Definitely not, but it'll be cheap. At least part of it will be. The "branching storylines" part of the trailer is no joke; in just the footage I've already taken there are dozens of different outcomes along different paths. (For example, the "go outside" forfeit is offered by Anna if you are losing pretty badly. To make her venture outdoors in the buff, you'll need to stage a comeback.) You'll be able (for free) to play the games right up until they get interesting. For a very modest fee, you'll be able to unlock the game to full nudity. But all those branches (and forfeits) need to be unlocked as well. You unlock them with "tokens". You win tokens by winning games, but you can also purchase tokens.

So what of the remaining free content? Well, that brings me to the subject of donations.

Now, I absolutely hate begging for money, and I'm not going to do it for much longer. I think perhaps I haven't been very clear what I've been trying to accomplish by asking for donations. What I'm not trying to accomplish is to make a profit. The pace of donations has been a little disappointing, but even in my most optimistic wildest dreams, I'd never collect enough donations to even come close to covering costs, let alone compensate me for my time. I'm asking for donations as an experiment, so I can learn something about my target audience and its willingness to pay for this content.

The experiment is coming to a close. Wednesday, April 11 will be the last day I will solicit or accept donations. If you've wanted to donate but have been putting it off, this is your last chance. After next Wednesday, I'll look at the number and amount of donations I've received and decide the future course of LostBets.com. The more donations I get, the lower I will set my eventual price... and the more free content I'll produce. It's up to you guys.
Posted by Red at 9:34 AM 9 comments:

Here's a promo for our first commercial product. It'll also give you a good look at new girl Anna... who will not be the only new girl in SGU when it's available. Enjoy.

(Update: BTW, neither video nor audio quality is particularly good in the promo, and neither is production quality. I sort of whipped it up in a hurry to get people an idea of what was coming; the final product will be much better on all counts.)
Posted by Red at 7:27 PM 5 comments: