That sort of thing really is my bag, baby

Looking ahead, Dolly and Nettle return in Episode 476. Last time, the loser merely had to expose herself. Things get taken up a notch as the loser not only has to spread wide, she has to show us how she masturbates. That's what happens after they play the new game Ball Stacks, using special spacers that Hippo made on his 3D printer. Tiny redhead or less-tiny brunette, which will emerge victorious?

Been awhile (too long) since the last blog post. At this point, apologizing for sporadic blogging has gotten really redundant. I hope someone's still reading.

Today we finally introduce Dolly and Nettle in Episode 472 playing a game of Strip Rock-Paper-Scissors. I hope you like them. I think you will. And for you POV fans out there, next week you'll see both Dolly and Nettle again, joined by Tobi, in our first three-on-one POV, Episode P073.

And now for some promos... 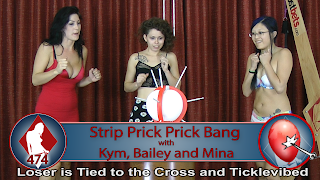 Speaking of Mina, she appears in Episode 474. And speaking of petite girls, so does Bailey. And speaking of enthusiastic exuberance (which I didn't, but what the hell), so does Kym. Fun-loving and very cute bunch. They play Prick-Prick-Bang, which is great for the tension it inspires in the girls. The loser gets ticklevibed on the cross. I don't know if "ticklevibe" is a word, but it ought to be.

And speaking of games that inspire tension, if not outright terror... 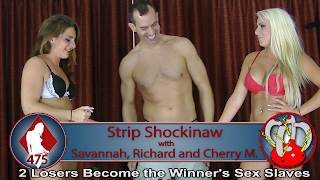 Back to co-ed fun in Episode 475 as Savannah takes on Cherry M and Richard. Two losers must serve whatever perverted sexual desires the winner has. I'll just note that at this point, while we've finally seen Savannah naked, she still has neither lost a game nor suffered a forfeit. Some girls have all the luck.