Today marks the end of an era: Episode 324, the last game from the 15-player party. Like the earlier 9-player party, the game is Team Champion (or Team Challenge, I kinda use the names interchangeably) and the forfeit involves a whole lot of naked people doing a whole lot of things to each other. It's a good one. Now to start planning the next party...

Here's a glimpse into the future:

I already described episodes 325 and 326 in an earlier blog post. Well, actually, I didn't have too much to say about 326 at the time, but I still don't. Stay tuned on that one.

Still more veterans return to break in a newb in Episode 328, with Catherine making her first appearance since Episode 287, and Kimberly, whom we haven't seen since all the way back in Episode 122, over three years ago. I've had a lot of requests to see more of Kimberly, so I hope her fans like it. They're joined by new player Caroline. The game is Pod Stomp, which involves a lot of jiggling when the players are well-endowed. The loser is secured to a chair with plastic wrap, and then mercilessly tickled. She's very ticklish. The outcome was hilarious.

And Episode 330 is the first one from the shoot I just completed, with Belle pairing up with newbie Alexander against Amber and newbie Zoë. It's team Air Hockey, it's really competitive, and the losers were written and drawn on, posed, and photographs. I'm going to make the photos available to the public for free when this one is published.

That gets us into April. Will have more to say about future episodes as they draw nearer.
Posted by Red at 3:34 PM 37 comments:

Episode 323, featuring Fern and Salem and a big red rope, is published. Enjoy.

This one is fairly short. Next week's mammoth update is not.
Posted by Red at 4:20 PM 19 comments:

And then THAT happened

Ahhhh. I feel much, much better.

Back in September last year, I took a look at my server and realized that I had enough raw footage to keep me going well into the middle of 2013. So reluctantly, I resolved to go on a shooting hiatus at least until the new year. Until yesterday, I hadn't shot at all since then. I haven't been in the company of even one blushing embarrassed naked chick since. It's been hell.

But like I said, only until yesterday. The players included two of my personal favorites, one relatively new to LostBets.com (only a year) and one veteran from the early days: Belle and Amber. They were joined by newbies Zoe and Alexander. We played five games, and I'm happy to report that I was able to use a lot of fan suggestions, including some that have been pending for literally years.

Belle and Amber had never met before, but they hit it off together amazingly. It was a lot of fun to watch them trash-talk each other. And late in the evening Belle seems to have awoken something in Amber. I got to see a side of her I'd never seen before. Soon you will, too.

Amber, by the way, just completed her Master's degree! Good for her, right? If anyone wants to congratulate her, I'll make sure she reads it.

That's the good news. The bad news is that the schedule is set for the near future, and the soonest any of these will be published is in the 330s. Worth the wait, I think.

Update: By popular request, here's a picture of new girl Zoe, between Belle and Amber, as they get ready to play a game of Earth and Fire. 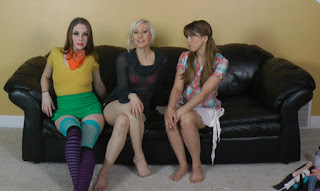 The Return of the Peg

First things first: nearly a year ago, I published Episode 273, featuring a unique forfeit for LostBets.com. Unfortunately, I quickly pulled it down because of glitches in the video, then promptly forgot about it. Well, it's fixed, and it's back.

And so are Eve and Grace. Cyndi had to leave, but I think the two new cuties did a fine job on their own. Enjoy.
Posted by Red at 4:20 PM 14 comments:

I already described Episodes 322 and 323 below.

Episode 324 is the grand finale of the massive party I threw last year with 15 players. It's another game of Team Champion, as the players split into two teams of 7 (with Skittles as MC) and compete in a series of physical challenges. The losers strip, and the winners get to have their way with the losers and a wide assortment of toys and restraints. A massive video that runs to over an hour long, this one is going to have to be split into two parts for publication. A worthy conclusion, I think.

Episode 325 is the first video taking into account the input I got last week when I asked who people would like to see back. It's Cory versus Lakota versus Tiana (who is now going by Tierra) in a game of Pod Stomp until two girls are naked and defeated. The losers have to 69 each other, trying to drive each other to orgasm. The first one to give in and succumb to climax suffers a paddling.

Episode 326 brings back Fern and Salem for their last game, but I'm not going to give away any details just yet. It's a surprise.
Posted by Red at 3:04 PM 22 comments: