Episode 546 closes out 2016 with a new game, Strip Ducking for Apples. Four cuties, one tub full of cold water, a whole lot of apples. And vibrators, it's got a few of them too.

So I mentioned in the last blog comment thread that LostBets B-Sides will be resuming publication on Tuesday. I want to amplify on that a bit, since there seems to be a lot of high hopes and excitement, and I feel like I ought to manage expectations somewhat.

Some of you younger folks might not even know what a B-Side was. See, once upon a time, back in the Dark Ages, back before iTunes or MP3s or even compact discs, music was sold on physical media called "cassettes" or "records". Unlike CDs, which have one recordable side, or digital music files, which have none, records and cassettes have two sides, which meant that the labels had to put something on each. If they wanted to sell you a single song, they'd put the song you actually wanted on the first (or "A") side, and then just some other song on the B-Side, usually another song from the same album. But they didn't put the best tracks on the B-Side, since they could sell you those separately as singles on their own. Instead, B-Sides were usually sub-par or mediocre tracks that the record labels figured they probably couldn't sell on their own anyway. There were some great hits that started off as B-Sides, but they were very much the exception, not the rule.

I like to get girls together to play stripping games. (Duh.) I like it so much that I do it more often than I really need to in order to keep LostBets.com going. The raw video comes in faster than published videos go out, so a backlog develops. I add videos to the publishing queue on the fly according to whim, and so some episodes end up just never getting put onto the queue. Sometimes it's because of something wrong with them. Maybe there are audio or video glitches, or maybe I just didn't like like the way the game or the forfeit turned out. Or maybe there's nothing at all wrong with the episode, I'd just overlooked it and now it's years old.

This is what eventually becomes a B-Side. They're older videos that may or may not have something wrong with them. Because of that:


Again, many of them have nothing wrong other than age, and there are some real diamonds in the rough in there. I really hope that people like them (some feature favorite girls we haven't seen in years) but please keep your expectations reasonable. A pessimist can only be pleasantly surprised.

Next week on the main store, Episode 547 gets back into hardcore. 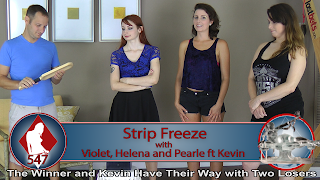 Pearle and Violet return for their sophomore appearances with Helena. This time, Kevin is there instead of Trace to take the losers. 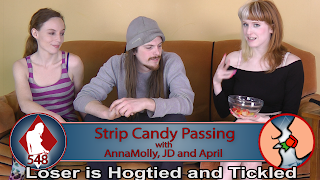 It's an MFF game of Strip Candy Passing, with lucky JD getting to snog April and Ana Molly. But he won't feel so lucky if he loses, since the winners will hogtie the hapless loser and tickle them naked for five full minutes.

P.S. It's been pointed out to me that Episode P145 stars Dylan, not Tyler. Don't know how I made that screwup, but it'll be fixed.

Chag sameach, y'all. I hope everybody is having a joyous holiday with loved ones, and if you're not, there's always next year. Episode 545 is one of what I hope will be a series of holiday-themed episodes, if I can remember to shoot them.

This is going to be a brief blog post due to holiday hecticness, but I wanted to share the promo for next week's Episode 546. 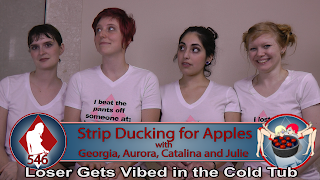 Speaking of seasonal episodes, this one probably would have been better in the autumn, but ah well. Ducking (or bobbing) for apples, that well-known fall pastime, only this time it's for clothing. I had the girls wear thin white shirts, naturally. It made for some interesting views.

I haven't promoed today's Episode 544 yet. Here it is: 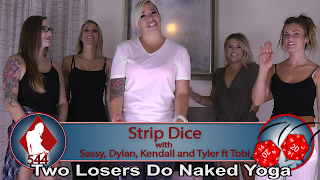 We finally meet Tyler, Kendall, and Dylan, joined by Sassy (which I'm sure will make a lot of her fans very happy.) Tobi acts as emcee for their first game. Like I usually do when introducing new players (especially new players who've never been naked on camera, like these three) I used a simple game and a simple forfeit. But two losers will get very exposed, at least one of them for the first time ever.

I already said that Episode 545, set to be published on December 23, will be a special one to commemorate the festive winter holiday, and so it is. 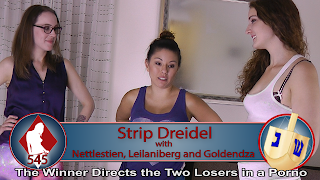