In the meantime, enjoy Episode 594 today. 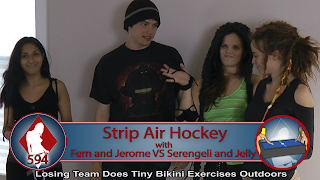 It's a long-lost episode featuring three girls I've gotten many, many requests to have back: Fern, Jelly, and Serengeli. Oh, and Jerome, whom I've gotten fewer request for. Keep in mind that none of these girls was willing to risk anything overly sexual (although Fern relaxed this later) so don't look for that. On the other hand, we get to see a couple of girls go into the great outdoors in the tiniest of bikinis, to show off their nearly-naked bodies as they do exercises. And look, there's even a promo!


Next week, we'll see a double-update weekend. Episode 595, on Saturday,  features Endza, Lelani, and Nettle, another much-requested group. Loser gets slathered with baby oil and paddled.


On Saturday, Episode 595a has another much-requested group. In fact, they're probably the most requested group. Ashley, Addie, Mouna, and Kylie play a new game (Whipped Cream Race) and there's a hardcore forfeit! Loser gets double-teamed by two guys, one in front and one in back! Sounds great, doesn't it?

Yeah, no. I delayed publishing this whole set for awhile because I didn't think it was good. But then when I saw Episodes 519, 584, and 592, I found myself wondering why I disliked the shoot so much, since those episodes might not have been the best but they certainly weren't awful. Well, now I remember. The game was pretty bad, but the forfeit was awful. The loser was just... awful, that's the only word. There is one reason and one reason only to buy this clip: to see three extremely hot girls lose their clothes, for probably the last time ever at LostBets.com. I wish I had a better send-off for them, but this is it.

Episode 596 will be the second featuring Dylan, Sassy, and Geneva. Last time those three got together, Geneva found herself getting a crash course in what it's like to lose at LostBets.com, getting stripped naked and covered in baby oil by the gleeful winners. This time, the two losers of this game of Strip Memory have to 69 in front of the winner, and of course all of us.

Then we get Avi, Cass, Lydia, Thomas, and Dante back in Episode 597, playing a free-for-all game of Screw Your Neighbor. Remember the spanking loop from Episode 406? Well, Dante sure does, which is why he really, really wants to not lose this game. Does he" Wait 'n' see.

That's it for now. I hope everyone (well, Americans, anyway) had a happy Thanksgiving. 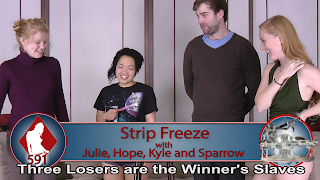 A lot of people have been waiting for this. I hope they like it, but I feel like I have to offer this caution. While the forfeit was great to watch and we get to see a lot of things, there were some things I would have liked to see and didn't, and I think I won't be the only one. Maybe sometimes I take my policy of noninterference too far. Anyway, enjoy the show, and maybe we'll see those other things some other time.

In other news, comments on the previous post have been answered. Please leave any replies here, since Blogger is a terrible way to maintain a community. Someday...