Today: Ben-Wa balls. If you haven't used them before, they're fun toys that tend to affect women way more than they'd think. Lots of women think that having balls in their pussy wouldn't do anything for them, and then end up shuddering spasmiung wrecks when they're actually used. See how Ashlyn and Sharron handle them in Episode 479. 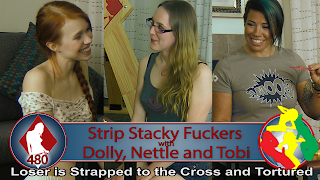 Sweet tiny redhead Dolly is back along with Nettle and Tobi, this time joining in as a player. It's a new game, Stacky Fuckers, and like many games we use for the first time, it needs a little tweaking to be at its best. Still a very entertaining episode with three beautiful (but extremely different from each other) ladies. Loser gets to experience our St. Andrew's Cross while the winners have their way with her.


The next week bringa in Episode 481. 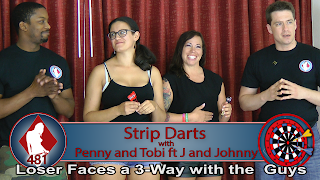 It's a one-on-one game of Strip Darts featuring two of our most competitive players: Tobi and Bex. The loser gets used by Jay and Johnny in a three-way... and the loser has to give up all her holes, front and back. Both girls have tannish-skin so I'm not spoiling anything when I say that seeing the loser sandwiched between pale Johnny and dark Jay is a really cool sight.

Marvin is a box with buttons, lights, and a speaker, built by Hippo and myself, powered by Arduino. We've always loved making cool stuff, and the advent of Arduino opens a whole new realm of possibilities to us, with the ability to have software control and be controlled by real-world objects. Marvin has been used in some new games, like Strip Freeze and Strip Frenzy, and enhanced old ones like Pirate Penguins and Earth and Fire. Like I say in the video, I'm eager to hear suggestions for how else we could use Marvin, or what features we should add to Marvin Mk II.

(By the way, to my ears I sound like a smarmy git in this video, which I swear I am not.)

Back into the light

So, I'm back, and I've got a ton of new footage. I'll be posting promos of the new players shortly. There are some real gems in the mix, playing a whole slew of new games and risking new forfeits.

I'm not just "back" in the physical sense of being back in town. I'm also (I hope!) back to being engaged with this blog and this site. I'm going to have to (yet again) declare Comment Bankruptcy and not respond to older comments, but so help me God I'm going to respond to each and every comment and email going forward. But I've said such things before and not followed through. Actions will speak louder than words. The POV store, which has been on hiatus the last couple of weeks, will resume publication on Wednesday. And I've got some pretty awesome new POVs, too.

This week's Episode 478 features some hardcore action as Kimmy, Lilly, Mina, and Savannah compete in Strip Shockinaw, with Bob and Flynt eagerly waiting in the wings to have their way with the losers. Next week, we'll see Episode 479, promoed last week in a badly fucked-up blog post. No new promos this week but there will be more next week.

Finally, I'd like to ask about something, and would appreciate answers in the comments. I usually frown on anonymous comments (grepping this blog for "sign your posts" comes up with 212 matches) but this time, I won't mind. If you prefer to answer this question without leaving your name, please do.

I ought to make it very clear that I don't think any less of anyone who has this preference, or consider them racists or anything stupid like that. It's a matter of what you like, and there's no accounting for taste. People reject clips all the time for having female players who are too tall, or too short, or too fat, or too skinny, or with a nose of a certain shape, or with boobs that are too small, or too big. There's all sorts of preferences, and nobody should be judged for them. But I am curious to know how prevalent this particular preference is. So I'd like to ask: would you consider buying a clip with a black man, or do you stick to other ethnicities only?

Unfortunately, this blog hasn't seen a lot of me lately. That's going to continue for at least a couple of weeks more, but I'll be back, and when I am, I promise to devote more time and attention to the blog. Thanks to Johnny for picking up at least a little of the slack.

But just because I'm not here to answer comments doesn't mean you should miss out on previews of coming attractions... or for that matter, previews of today's attraction. Meet episode 477. publishing today. 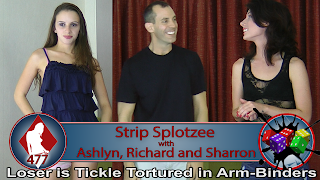 Attention to blog commenter RRFrope: if you're still out there, please drop me an email at red@lostbets. You're entitled to a free copy of this one. It's taken me four fucking years, but we finally have the armbinder you requested.

The co-ed group of Ashlyn, Richard, and Sharron return in a free-for-all game. The loser is securely bound in the aforementioned armbinder and subjected to ruthless tickling.

After relatively tame 477, we shift to hardcore next week for Episode 478. 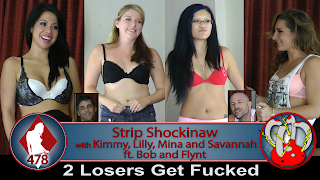 Four hot girls -- little Lilly, littler Mina, Asian cutie Kimmy, and undefeated Savannah join to play Shockinaw. Damn, I love this game. When I first started using it back in 2009, I actually felt a little bad and guilty for inflicting electric shocks on cute young women, but the years have hardened me and made me crueler, so now I say: bring it on! If the girls don't want to endure the pain, they shouldn't lose.  (Of course, in this game a girl engages in behavior that's arguably cheating, so that argument holds less water.) Bob and Flynt are on hand to have their way with the two losers.

And then Ashlyn and Sharron are back, sans Richard, for a one-on-one game with a different bondage-involving forfeit. 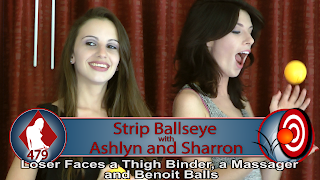 In 477, the loser wore an armbinder. In Episode 478. it's a thighbinder, which loops around both thighs and behind the wearer's neck, forcing them back and open and keeping the victim from closing her legs. And the winner takes full advantage, vibrating the loser's helplessly exposed pussy, and for the first time on LostBets: Ben-Wa balls. (I have to ask Johnny to correct the spelling of "Ben-Wa" in the poster frame. This ain't Archer.) According to Wikipedia, these toys are also known as "Orgasm balls", and boy, does that shoe fit. The loser is driven absolutely nuts by the vibrator on her clit while the balls stimulate her from inside.

As for the POV fans, here's what you've got to look forward to: 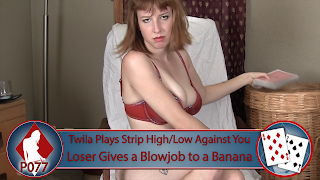 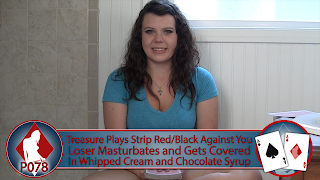