Doing it right this time

So Clips4Sale's maximum file length and minimum sale price had forced me to split Episode 500 into thirds, and charge a total of $45.97 for it. Fuck that. Check out our new clip for sale here. It's standard definition, but if you email me your receipt I'll send you a copy of the uncut high-def version.

Already bought the split, overpriced version? Check out the link anyway. I've got something for you, too. 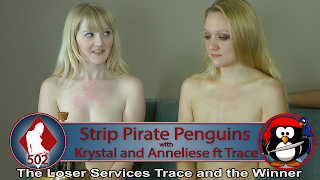 Some have recently asked to see more B/G, and here it is. (Mind you, the B isn't a player, but a part of the forfeit. Those who want to see more male players, we've got you covered later.) It's a surprisingly nail-biting game of Pirate Penguins featuring lovely blondes Krystal and Anneliese. Loser gets taken by the winner and by Trace, but honestly, neither of these girls is very dominant. The winner needed plenty of instruction from and goading by Trace.


So last week, I blogged about a couple of shoots we'd just finished. Here are some details about those shoots.

First up, appearing on Day 1, is Ana Molly.

Next up, on Day 2 we welcome another Latina to our roster, Catalina.

I've got Georgia on my mind. She was a bit nervous, which made her extra cute. She's also studying to be a minister, which I believe is a first among our players.


Finally, I'm totally in love with Aurora. She has a CS degree! We chatted about Arduino! A geek girl with a hot body and rockin' tits, who could ask for more?

And those are the four new players we'll be meeting soon. Beginning next week, I'll start introducing the returning players.

What a long, strange strip it's been

Five hundred. It's unbelievable. If LostBets.com were a scripted primetime U.S. television series, it would have the fifth most episodes of all of them. I'm running out of ways to express the fact that I don't have any ways to express how grateful I am to every one of you for making this possible.

Episode 500 looks back at all of it. It's incredibly long at 150 minutes, but I wouldn't cut a thing. It's just that good. I hope you enjoy it.

500 isn't all that's been going on. Hippo's visiting, and we've done two shoots, see previous blog post. For that reason, I haven't yet done anything with the nominations I asked you to make. Just wanted to let you know I haven't forgotten.

Also, we've been falling behind on promos. That'll change, too.

Sitting in a hotel room after the completion of two consecutive highly successful shoots. Feeling satisfied. Introduced some awesome new chicks to LostBets.com -- you'll like Ana, Aurora, Catalina, and Georgia -- and reconnected with some old friends. These are very special old friends, old friends that people have been positively clamoring to see more of, for years in some cases. Their returns were everything I could have hoped for, coupling their distinctive styles with new directions we haven't seen from them before. I love my job.

Climaxes for the climax

Today is the finale of You Bet Your Ass. Hope y'all liked it.

Next week of course is Episode 500, featuring more players than we could list. It's still technically not finished yet, but it will be by Friday. At least, I hope so. Hippo is out here to record some bits for 500, and also to help plan for a shoot that I don't want to jinx, but if all works out, people will be very, very happy. We'll see.

And then there was one

Episode YBYA3 was a bit late yesterday. Sorry about that. (Come to think of it, this blog post is a little late too.)

Howdy Lost Bets fans! This is Johnny Niceguy, your friendly neighborhood video editor, letting you know for sure that the long talked about clip store is finally live! Prettylittlesexslaves.com is up and running! I didn't think the guys would have it together in time but they pulled it off. In fact, I have another store I opened just in case they didn't come through. It's at Mind Control Collar Films. Ironically, it's not actually active for taking payments or selling clips.

The movie I made with Amber Heavens, Camilla Rhodes, Zayda J and many other talented people is available at this link Private Eyes Movie. It will be at this link for one month. It's not high art, but I'm proud of it. It's free, so please watch it (and forgive the many audio issues, if you are so kind).

I'll be starting a new blog and get the movie a permanent home soon. In the meanwhile, the clips that are available in the new stores feature myself and Amber Heavens. Her first times on video were with me, and she and I wore masks over our eyes and didn't have the best equipment or knowledge of what we were doing, but we were having a lot of fun doing it! She's young and hot and mostly playing the role of a girl under the power of a Mind Control Collar that turns her into a willing sex slave. That theme appears a lot in the videos I've made. Hopefully some of it will be hot to others as well.

That's all from me. Back to your regularly scheduled Lost Bets games!
Posted by Johnny at 2:59 PM 10 comments: