So last Saturday, Morgan went shopping to buy stuff for LostBets. Her shopping cart contained, among other things:


The lady behind the checkout counter gave her a good long hard look and asked, "Got anything exciting planned for tonight?" to which she replied, "Nope, just a typical Saturday night." The checkout lady then told Morgan that she was getting off work in a few hours.

Here's the reason for the shopping excursion: 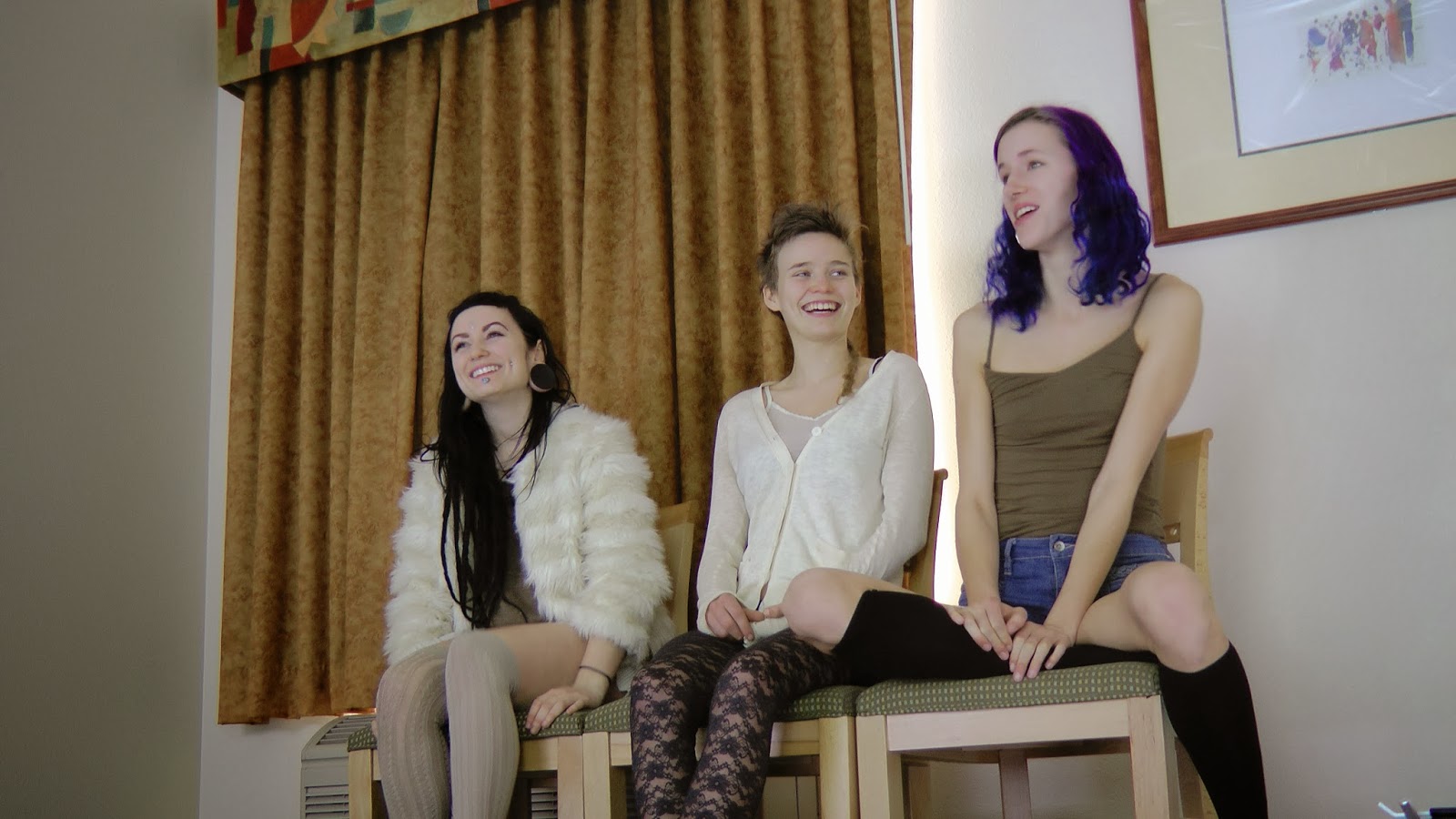 That's Jelly there in the middle, minus her once-impressive dreadlocks. The other two are her friends Blossom and Indigo. (No points for guessing which one's Indigo.) Three amateurs, two of them facing their first time ever on camera. Coming soon.

Coming sooner than that is this week's update, Episode 384, pitting Bex, Piper, and Madison against each other. (Sassy is present but doesn't play. She's the stark-naked pin girl for this game of Soccer Bowling.) A lucky pizza guy gets a double-eyeful.

One of the things I like about the game Shockinaw is the nervous anticipatory dread it produces in the girls. Well, it turns out that pushing a spike towards a balloon that might pop is just as nerve-wracking as holding a handle that will give you an electric shock. It's great watching the girls wince and squeeze their eyes shut as they slowly push in the spike and pray for the balloon not to pop. Price Prick Bang makes its debut in today's Episode 383, with veteran punster Candle taking on fast-learning newbie Lela. Next week we'll see Bex, Piper, and Madison competing again in Episode 384. We'll see Sassy too, but she's not actually playing. The game is Soccer Bowling, where the girls have to kick a bowling ball at a rack of pins and try to knock down as many as possible. Sassy,. as the loser of Episode 380, has to be the nude pin girl, setting up the pins in all her naked glory. The two losers have to greet the pizza guy naked, and offer him a lapdance. He agreed, albeit nervously and with trepidation. Good times.

I've been away from the blog for the last couple of weeks. First of all, gratitude to those who expressed concern for my well-being. I'm fine, and thank you for caring. Sorry I've been away. A huge backlog of unresponded-to blog comments has accumulated, and I'll try to get to it soon.

The POV site hasn't been updated because quite honestly, I'm not very happy with how it turned out. As more than one person has noted, an awful lot of the videos feature the players being real bitches to the viewer, seemingly disgusted by him. While I'm sure that's very appealing to some, it's not really my thing and apparently many of you agree. Johnny's edited together "de-bitchified" versions of these clips, with the worst of the bitchiness cut out, and I'm planning to do a re-launch of the site later this month. If you bought the "bitchy" version and don't like it, I'll be offering free de-bitchified replacements.

Finally, enjoy a couple of promos for upcoming Episodes 384 and 385.

Madison, Bex, Sassy, and Piper are back for their second game today in Episode 380. Concerned parties, don't worry: Sassy does not keep her socks on. After breaking the amateur newbies in gently with an exposure forfeit (which both of them avoided anyway) I decided to bring things up a notch and make one of them masturbate herself to orgasm for the other girls, for us, and for the cameras. It turned out that young Piper had never actually masturbated before but she was willing to risk it if she lost. (She probably figured that with four players and one loser, it wasn't much of a risk.) 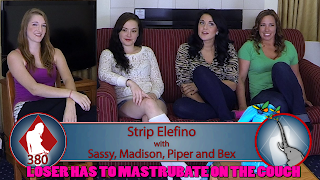 Next week, in Episode 381, we welcome new girls Jordana and Rachel, alongside Michelle, last seen in Episode 304. Jordana and Rachel exemplify two types of young Jewish hotness. Jordana's got the olive skin with jet-black hair, while Rachel's got the pale milky skin with jet-black hair. I love 'em both.  Michelle's a Southern housewife, and I hate to say it (and I hope her feelings aren't too hurt if she reads this) but I think she looked better last time I saw her.

The hotel had previously asked us to stop filming in their lobby, so we figured, if we can't bring the girls to the lobby, why not bring the lobby to the girls? The two losers had to go down and ask people to please come back to the room to watch them strip. And then give them lapdances. 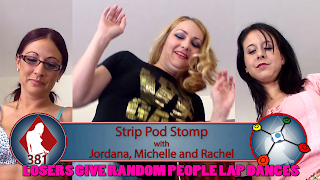 Blog commenter Marco pointed out that that the 10-second previews on C4S don't give you much, and suggested that we make promo clips for the new videos. This was by no means the first time someone had implored us to make promos. but it's a good idea and it's long past time we did it.

The week after that, Olivia and Mouna are back in Episode 382 to play Earth and Fire with Dakota. This episode exposed what I think is a fatal flaw in the game, but I've got a few ideas on how to fix it. One of the girls lost more than the other girls but was able to keep calm and not let herself be forced to orgasm. Another girl didn't lose nearly as often, but she's much more sensitive, and when she lost a round late in the game, it didn't take much before her sopping pussy was soaking the couch as she gave up and succumbed. Which left her nice and wet for the forfeit, which was to get ganged by three guys. 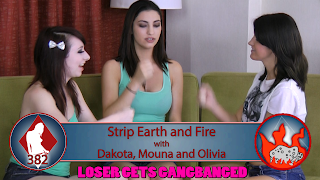 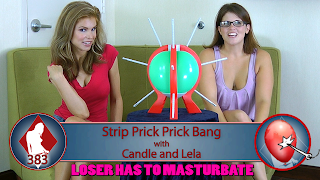