Say, do you remember dancing in Bextember?

Never was a cloudy day! (And if you have any idea what I'm talking about, you're old.)

In the last blog comment thread (after making a fool of myself with a major Calendar Fail), I promised to preview what's coming up in the bonus updates next month. First, though, a reminder that today Episode 419 will be published, featuring Cheyenne and Kym practicing their target shooting on a hapless Lika. Loser serves the winner an orgasm.

Next Friday will be Episode 420, already previewed. That Saturday, Episode 421 has Bex, Piper, Zahara, and Sheri playing to two losers, who have to put on a show by riding a device none of these girls have even seen before: a Sybian.


I'm not sure how I feel about this one. It's the first time I've put a girl on a Sybian and she hasn't really enjoyed it. It was probably because she was nervous and the person operating the controls didn't know what she was doing either. On the other hand, the other loser got into it in a big way and gave us a major orgasm as a red flush traveled down her chest.

No preview videos for the rest (yet) since they're not edited.

Saturday September 13 will bring Episode 423, with the same four players playing Pirate Penguins. The two losers get turned into "living art": the winners cover their nude bodies with paint, and then they're pressed into a canvas to preserve the imprint for all time.

Congratulations are in order

First things first: big hearty congratulations to LostBets.com's own Johnny Niceguy, who this week celebrated one full year of sobriety. Way to go, buddy. I knew you could do it, and we're all proud of you.

Speaking of Johnny, you'll see him (although not much of him) on Saturday in Episode 418b when Bex challenges him to an unplanned quickie game of Shockinaw. She'd never played it before but wanted to try it and to convince her friends to play so Johnny was her test subject.

That's just the dessert, though. The main course comes today with Episode 418, as Bex and her friends Sheri, Piper, and Zahara challenge each other to spin the Wheel of Torment. The amateurs are gradually expanding their experience into newer, sexier areas. The first loser wears the cock gag. The second loser gets fucked by it.

Coming up in a couple of weeks, we have this: 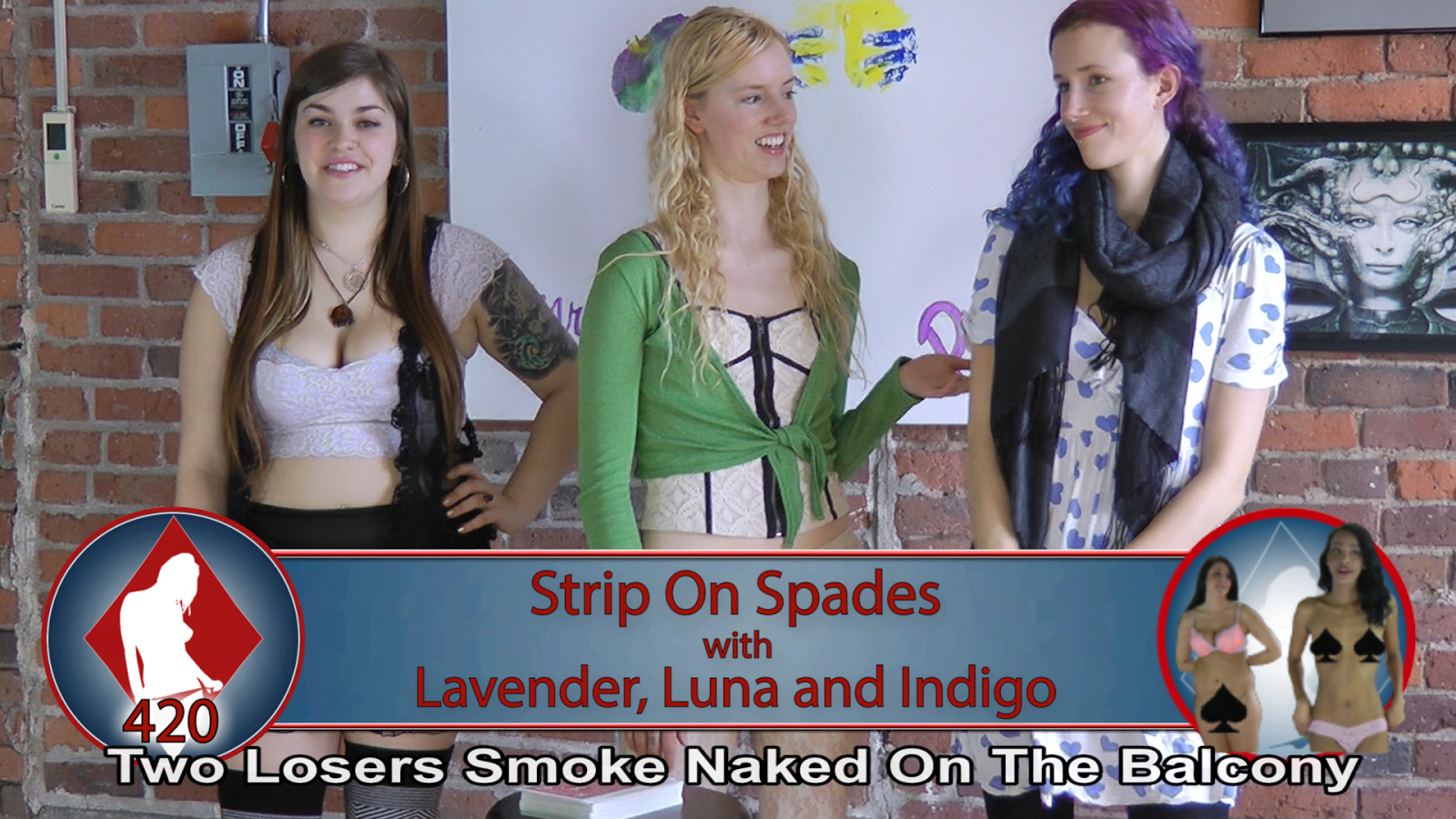 Indigo is back with her best friend Lavender and her sister Luna. Unlike the last set of amateurs, these three have really tight limits and aren't willing to risk doing anything sexual. That's okay; if we can't make them do sexy things, we can make them do embarrassing things, and this one's a doozy.

These shoots happened in Dante's loft in the heart of downtown Seattle, which happens to have a balcony overlooking a very busy street indeed. And when I found out that all three of these girls are smokers I knew I'd found the right forfeit for them. The two losers have to go stand on that balcony stark naked and smoke cigarettes, in full view of that busy street, for the entertainment of the passing traffic, not to mention a few passing pedestrians as well. It's pretty awesome. And besides, isn't a smoking-related forfeit perfect for Episode 420?

I've always had a thing for smart girls, so I've got a soft spot for Isobel. Easily one of our smartest players (not that Candle and Caroline are intellectual slouches), when I first met her in 2008, she was doing nude modeling to pay her way through college. It's some years later, she's gotten her undergraduate degree, and the nude modeling is to pay her way through grad school. Soon she'll be Dr. Isobel, and we all wish her the best. See her today in Episode 417.

Next week will be a double-update. Well, more of a one-and-a-half update, as Saturday's video is pretty short, more like a vignette. It's a mini-preview of Bextember as Cheri, Bex, Piper, and Zahara spin the Wheel of Tormet in Episode 418 until there are two naked losers. The first loser has to wear the cock gag. The second loser gets fucked by it. Then on Saturday, Episode 418b we see what happened when I tried to convince the girls to play Shockinaw. 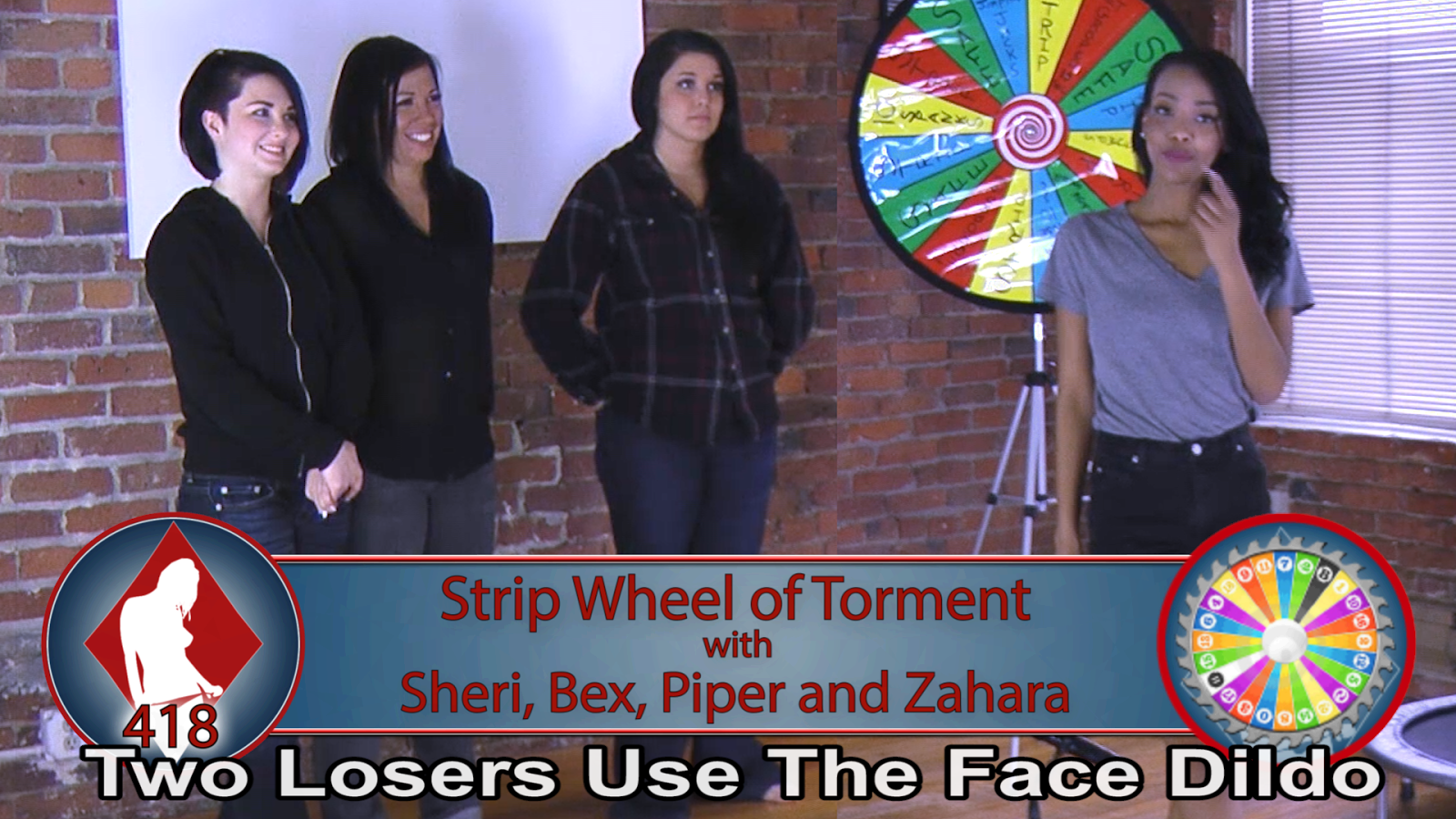 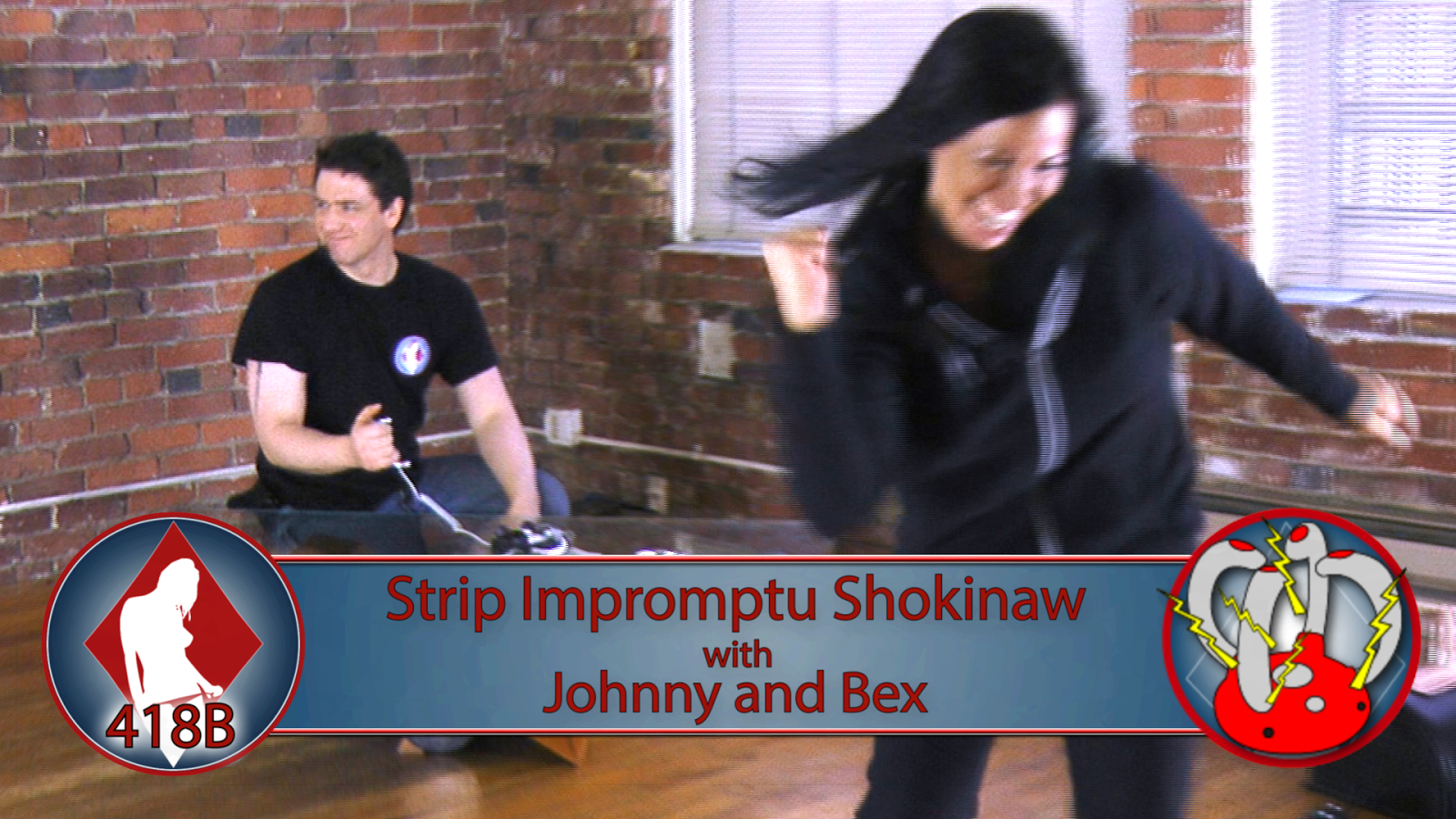 What do we do when we have a group of three girls, one of whom has much lower limits than the other two? One solution is to play Body Shots, and let the timid girl spend the whole game completely naked and getting shot at while the more adventurous girls risk higher stakes. Such was the case in Episode 419. Lika dispels stereotypes about hot blonde Russians by being unwilling to have sex, so Kym and Cheyenne step up to the plate, hoping to win the other's services. Usually a forced orgasm is a penalty, but neither of these girls is particularly shy and they both wanted to cum, so in this game, the orgasm is the prize. 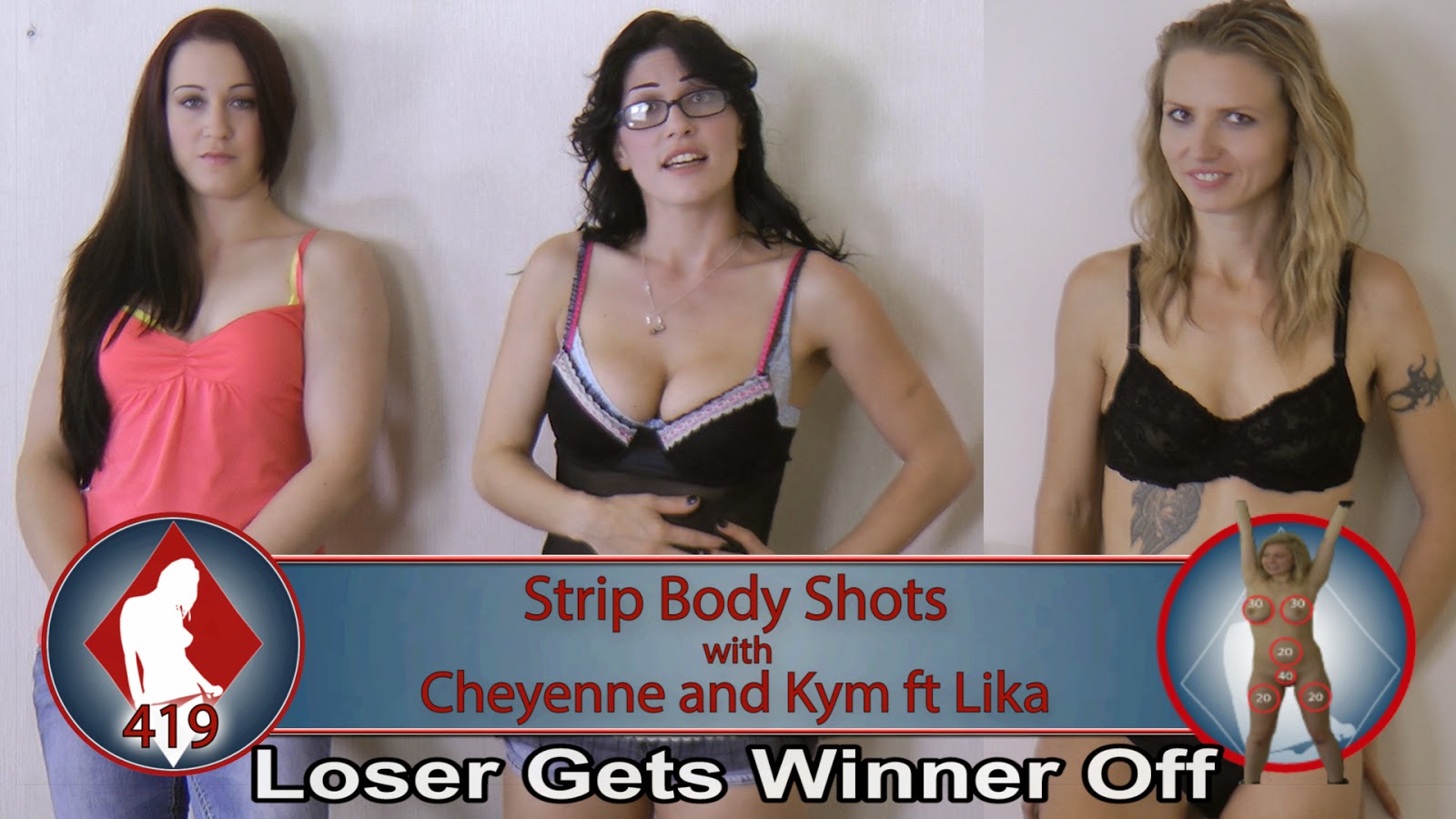 Shit be goin' down

There was no POV update this week, because we're out of town and I didn't get it ready in time to publish it before we left. (For the same reason, no promos for upcoming episodes today) Sorry to disappoint, but next week you can look forward to challenging RyAnne in a game with multiple endings.

This won't affect today's scheduled publication of Episode 416, fortunately. We introduce Luna and Lavender, two young ladies who've never been naked on camera before, and we bring back Luna's sister Indigo, who lured them into it. I like these girls and I hope you do too. See them again in Episode 420, risking some very public nudity. That's what they get for being smokers.

So why am I out of town? Shooting. We're in the middle of a five-day shooting binge, and holy hell, the things we've seen. We've met lots of new girls, and a few new guys too. We've reunited with old friends and made them risk doing things they've never done before. We've used our new equipment, and it is awesome, especially the St. Andrew's Cross. We've seen cocks, pussies, and assholes licked. We've managed to fill several fan requests, but the amazing thing is that we didn't  ask for any of them. It's not like we ever actually told anyone, "Okay, after he cums all over the first loser's ass, make the second loser lick it up," but it happened, and that's one example among many.

Among the girls who've come back: Dakota, who's been working out and whose body has gotten nicely toned. Lela, who's taken up kickboxing and whose body has gotten really toned. Bex, who isn't Bex anymore, but she'll explain that to you (naked) later. Bailey, who's stopped straightening her hair and let it go to its natural frizz-fro. Catherine, who retired from modeling last year but who came back just for us "because you guys are so much fun."  Addie, a kinky girl from way back who nevertheless found herself doing something she'd never ever done before, either on- or off-camera.  And then there were the newcomers: freckled Tara with her pale skin and tight body, Lizzie, who reminds me of a redheaded Bettie Page, and Kevin, with his absolutely enormous balls. And that was just on the first day. It keeps getting harder to raise the bar, but we keep managing to find ways.

Anyway, that's why no POV.  Busy. Writing this on an extremely rare break. Remember, I do this all for you  :-)

I've written about Bex before, and why I'm totally in love with her. She's hot (and getting hotter every day), she's spunky, energetic, and competitive, and she's got an uncanny knack for recruiting 20-year-old amateurs to join her in betting their clothes. She's also the star of some pretty incredible published and unpublished games, including some very steamy hardcore. Unfortunately (if this could really be called unfortunate) I've got so much of it that it could take half a year of more for it all to be published. I know a lot of you are impatiently waiting for these videos, especially the ones from her last shoot with Sheri, Keenly, and Sassy, and I don't want to make you wait that long.

So in September, we'll be doing another month of double-update weekends. But it'll be a little different from our traditional bonus months like Double December or June Jubilee or Midweek May. Those involve simply accelerating the production schedule, keeping the episodes in the same order. Bextember, on the other hand, will have the Friday updates continuing on the planned schedule ,with the Saturday updates all being Bex-centric episodes. We'll see what happened the rest of the day with Zahara, Sheri, and Piper, and maybe also see what happened when they came back, and invited a couple more people to join them.

With a few exceptions, this summer has seen mostly softcore updates. So if the summer's been a bit cool for you, don't worry. Things are gonna heat up in a big way this winter.

By the way, if you're a Bex fan, you should really check out this week's POV update. The two versions feature two new sides of her we haven't seen yet: as an embarrassed naked loser being penetrated in a very uncomfortable place (and not the back of a Volkswagen, either), and as a gloating, gleeful CFNM doling out extremely harsh punishment to an unfortunate male loser.

Finally, check out this promo for Episode 417.