Here;s something we haven't had in awhile: a double-update weekend. For this one, both episodes feature the same fun-loving group of five, one softcore and one hardcore. The ethnically- and vertically-diverse group of Helena, Desiree, Yesenia, Cierra, and Jay square off. In Episode 563, it's a free-for-all game of Strip Freeze with three naked losers who have to bend over and take barehanded spankings from the winners. And while these five are friends, they're all gleeful at the thought of getting to spank any of the others, and none can be expected to pull their punches. 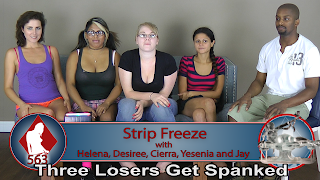 The next day, the stakes are raised in Episode 564. Jay sits out the game, instead being the game's beneficiary. The two losers of the game of Strip Rock-Paper-Scissors (king of the hill style) become Jay's playthings, with assistance from the winners. He brings his unique and creative style to the forfeit, and while the winners delight in being in charge, nobody has a bad time. 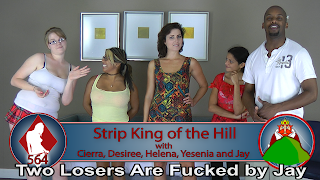 I don't have promos or even title pictures for future episodes because the queue of ready-to-publish episodes has run dry and we're back to finalizing episodes right before publication. But I do have the contents of the next few episodes laid out, so here they are, if you're curious.

Episode 565 stars Endza and Nettle playing a very unusual game of Shockinaw. Let's just say the girls don't hold the handles in their hands. Leilani was there too, but as soon as she heard what would be going on she opted out immediately. Loser finds herself getting pounded by the winner's strap-on,.

Episode 565 brings back Gracie and Roxy for their second outing. Last time, the loser got fully exposed. This time we kick it up a notch as the loser has to spread open and show us how she masturbates. Good times.

The reason(s) why the edited queue has run dry and I've been AWOL again is that Johnny and I have both been faced with extremely important tasks, and work has just had to take a back seat. The good news is that there just might be some light at the end of the tunnel. I figure you guys are mostly here for the pr0n rather than my scintillating prose, anyway.
Posted by Red at 11:22 AM 8 comments:

From me to thee: free 3D POV

So I've disappeared for awhile. Right after promising not to do that anymore, too. But my absence hasn't been entirely unproductive: Hippo and I designed and 3D printed a rig for shooting panoramic 3D video. We've never done anything like this before, and it's still very much experimental, but I'm fairly happy with the results of our first try. I'm giving away the first POV shot with the new equipment for free, and I'd appreciate your feedback. It features new girl Avi as your boss, promising you a promotion if you beat her at a game of Strip High Card. The file is formatted for 180 degrees, side-by-side. I view the clips on an Oculus Rift, but it should work in anything that can display 3D and has a movie player. I'm pretty sure that even a Google Cardboard would work. You can download it from this link (contains nudity, duh). It's also on YouPorn.

Today's Episode 560 features the return of amateurs Cora, AngieJo, and Jennie. The loser gets tied up in some pretty restrictive bondage and vibrated by the winners. Enjoy.

There haven't been many promos lately, and this is still true of next week's episode. Last year in December, I published Episode 545 to celebrate Hanukkah. Well, there are goyish holidays that should be celebrated too, and one of them is coming up next Sunday. Episode 561 will honor Easter, and there is a bunny involved.

Don't forget to tell me what you think of the 3D POV. By the way, our 3D rig also has a place to mount a GoPro, so the videos we shoot with it will have 2D versions as well and not be 3D exclusive. We still are working on finalizing the file naming convention for the 3D POVs. Originally we were going to take the P from POV and add 3D followed by an episode number. Since this first one was free and not really part of the POV stream, we gave it episode number 0, before realizing that P3D0 might not be the best thing to include. Working on it.