First things first: I'M BACK. I don't know if anyone's still paying attention, but if you are, I'm ready to pay attention too. Please leave any questions, comments, or feedback you've got, and I'll answer. If you asked something earlier and never heard back from me, please ask it again.

I haven't been entirely idle these last few weeks. I've gone through and cataloged our footage, and made a list of everything we've filmed, including much that hasn't been published yet. A lot of it includes some favorite players, and I know people will want to see more of it. Anyway, I'm publishing the list so you can nominate episodes you want added to the queue.

You'll probably need to scroll around to see all that stuff. (There should be three columns.) Also, I did the best I could but it's possible I accidentally included an episode that's already been published, either as a regular episode or a B-Side. Please let me know if I missed any. 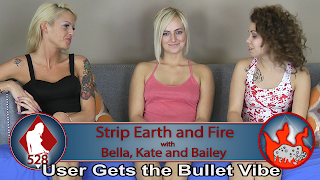 Y'all remember Bella from last year, right? She's back, and she joins wild-child Bailey to introduce platinum blonde Kate. The game is Earth and Fire, and the loser has to insert a bullet vibe... and wear it all throughout the next game.

That title was actually supposed to be used last week when Episode 522 was published, in honor of WA-522, which runs between those two cities. Okay, it's lame. And I missed it anyway: no blog post last week. Sorry 'bout that; hope people are still reading. Had some intense bullshit to get through.

So last week we got a bit of b/g oral with Aaron and Cora, whom I realize aren't to everyone's taste (but then again, no player I've ever shot has been to everyone's taste) but for those who want to see "real people", genuine amateurs taking tentative steps, they're for you. This week we've got Belle, Ana Molly, and RyAnne playing the other game with the infrared thermometer I'd mentioned earlier. And don't worry: Julie will be back to join them.

Not in their next appearance, though. That'll be in Episode 526. 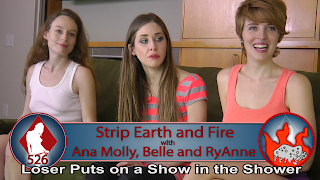 It's a game of Earth and Fire, which again I may be overusing, but damn, I like it. Winners direct the loser as she puts on a show in the shower. And there's something about watching a girl made to perform lewd acts while water beads on her skin and down her body.


Then we meet some newbies and welcome back some oldbies in Episode 527. 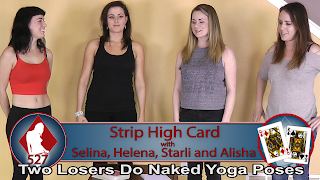 Yep, Starli is back, and so is Helena, and I like both of the new girls and I think you will too. You'll be the judge of that. Anyway, as I've also said before I think I'm overusing the yoga poses forfeit to introduce new players, but at least it forces the losers to expose everything they've got, leaving nothing hidden. Still, in the future I've gotta add more variety. Don't want to let things get stale.

Here it is again

Last week, I said that I couldn't preview Episode 525 yet because it'd spoil the outcome for Episode 520. Well, it's been a week, so here's that promo. 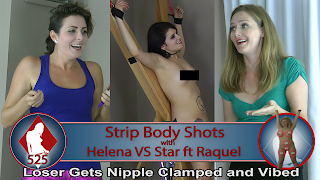 Raquel is strapped to the cross as part of her punishment for losing Episode 520, and Helena and Star draw targets on her body and shoot at her, trying to score points. The loser has to surrender her body to the winner's pleasure. This is, sadly, the last game I have featuring Raquel, at least for now, although hopefully not for ever. That means that her perfect 0-3 record will remain intact, for now. But at least she gets a little bit of revenge: she gets to join the winner in her enjoyment of the loser. It's something, I know, but scant comfort to a three-time loser.

Here's an ILAMC promo featuring Tom. This is also a spoiler, for Episode 510, but that was awhile ago, so what the hell.

I've said before that Earth and Fire is one of my favorite games. That's for a number of reasons, and  not just because I invented it. I also appreciate the quality of the orgasms and what they do to the losers. If they want to avoid the forfeit, the girls struggle as hard as they can to push back the orgasms, so then when they finally can't hold back any longer and the dam bursts, frequently it's so intense the girl is left spasming and flopping about like a fish. In an effort to avoid having an embarrassing forced orgasm, the loser ends up having an even more embarrassing complete loss of control, helpless in the grip of intense, irresistible pleasure.

That certainly happened to the loser today. And then her exhausted, sweaty, super-sensitive body was strapped to the cross for the winners to have fun with, which they did. This was a lot of fun to film, and the resulting episode is (IMO) excellent.

This episode has a followup, Episode 525, so I can't preview the latter without spoiling the former. Next week.  For now, here's an ILAMC featuring all three players from Episodes 518 and 521.