Is there a whoops?

Is anyone having problems with Episode I001, the collection of clips featuring Anna I published yesterday? It works fine on my computer but I've heard from two customers who can't get it to play. Please let me know if it's not working for you and let me know what operating system and media player you're using. In the meantime, I've removed the clip from the store for now.

Dylan and Carmen and Nancy are back today in Episode 627. I love Dylan and Carmen and their dynamic, but whenever they're around, I feel nervous. They're so wild and hyperactive, I'm really afraid that somebody will get injured one of these days. But considering the great video I get from these two, it'll probably be worth it. 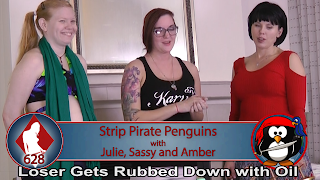 Old favorites Sassy, Julie, and Amber play our balancing game, with the loser's nude body getting rubbed down by oil. Like, a lot of oil. Major glistening.

And then there's Episode 629, to be published July 20, Moon Landing Day. 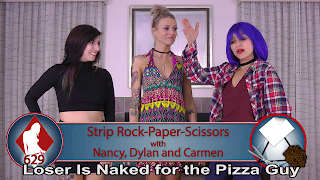 The same trio from this week is back again, and I figure that since these girls are so wild, they might as well be wild in front of a stranger, so a lucky pizza guy gets an eyeful. And a palmful of ass, but that wasn't planned. It's a simple game since the pizza had already been ordered and was on its way. I wanted to make sure the loser was good and naked by the time he arrived.

Blast from the past (again)

This will just be a quickie. Full blog post tomorrow.

The POV that was supposed to be published yesterday will be published tomorrow. (UPDATE: available now in the POV store.) It's something I've talked about before: the clips I shot that were intended to be used for an interactive game that I never actually made. I'd forgotten about it until A French Guy reminded me of it after seeing a very, very old promo. In fact, here's that incredibly cheesy promo right here:


It features a girl named Anna and it was filmed on the second shoot I ever did. So don't expect great videography; both my equipment and my skills were woefully inadequate. If you want to see the script this was based on, it's available at this link.

And A French Guy, please send me an email at red@lostbets.com. You get a free copy of this. Thanks for the reminder!