So in the last blog post of last year I said something about writing another blog post before the end of the year, answering blog comments, and previewing upcoming materials. Instead I did none of those things and just disconnected for awhile. Now the comment backlog has grown even longer. Sigh. I'll get to it.

This is the five hundredth blog post, by the way. Woo hoo! 
The following week sees the return of some popular chicks, and dudes too. 
That brings us to Episode 448, the second appearances of Bella and Sharron. 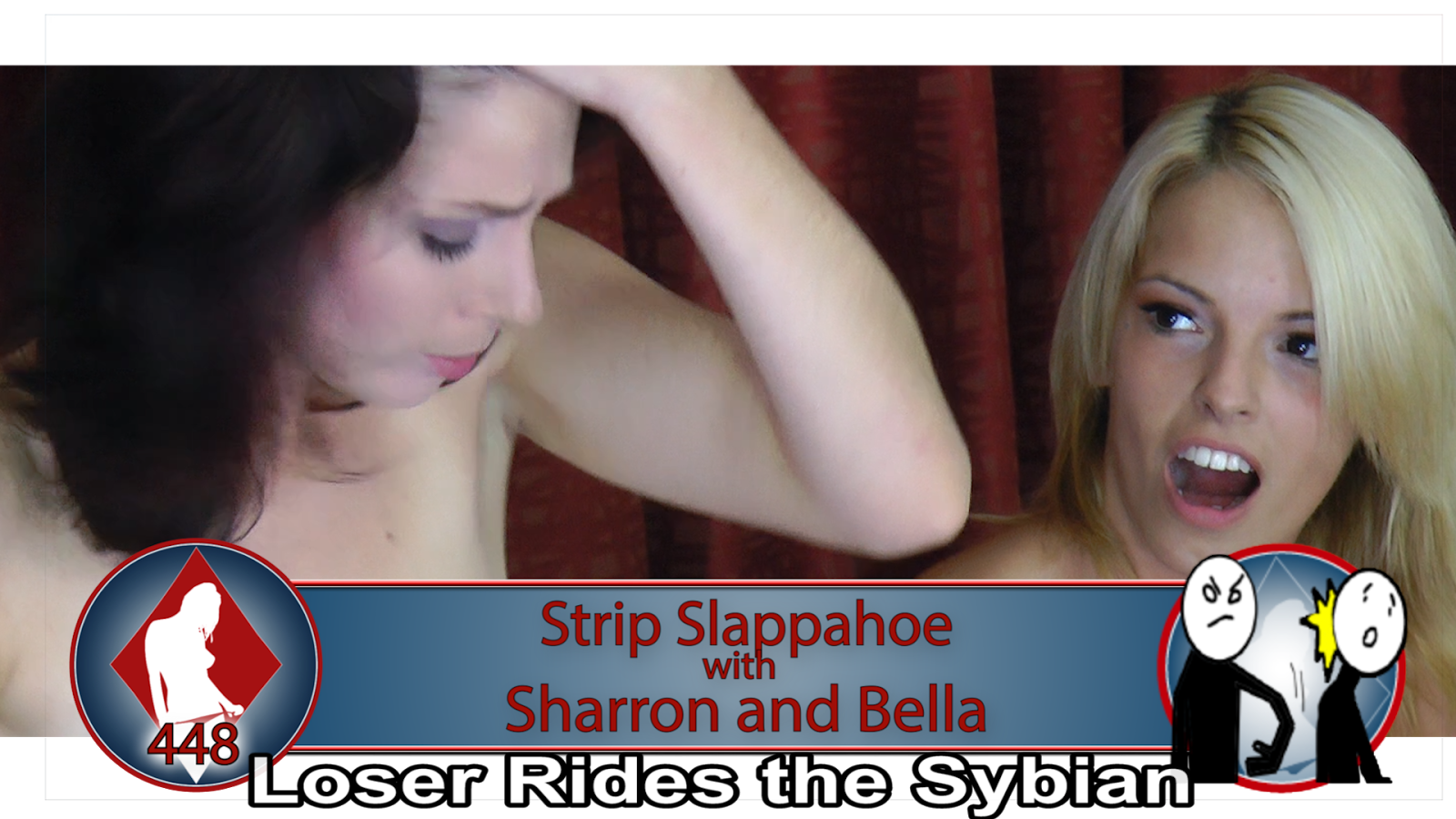 It's a new game: Slappahoe, probably better known as Slapjack or just Slaps. The girls place their hands together palm to palm, with one girl being the slapper and the other the slappee. The slapper tries to slap the slappee's hands. If she misses, she has to strip. If she hits the slappee, or if the slappee jerks her hands away too soon, the slappee has to strip. Pretty simple, but also pretty tense and fast-paced.

The loser of the game has to entertain the audience by sitting on the Sybian while the winner controls it. The loser of this episode had never been on a Sybian before, and she had no idea what she was getting into. She ended up leaving a wet mess all over the device.


And that brings us to one of my personal favorites, Episode 449. 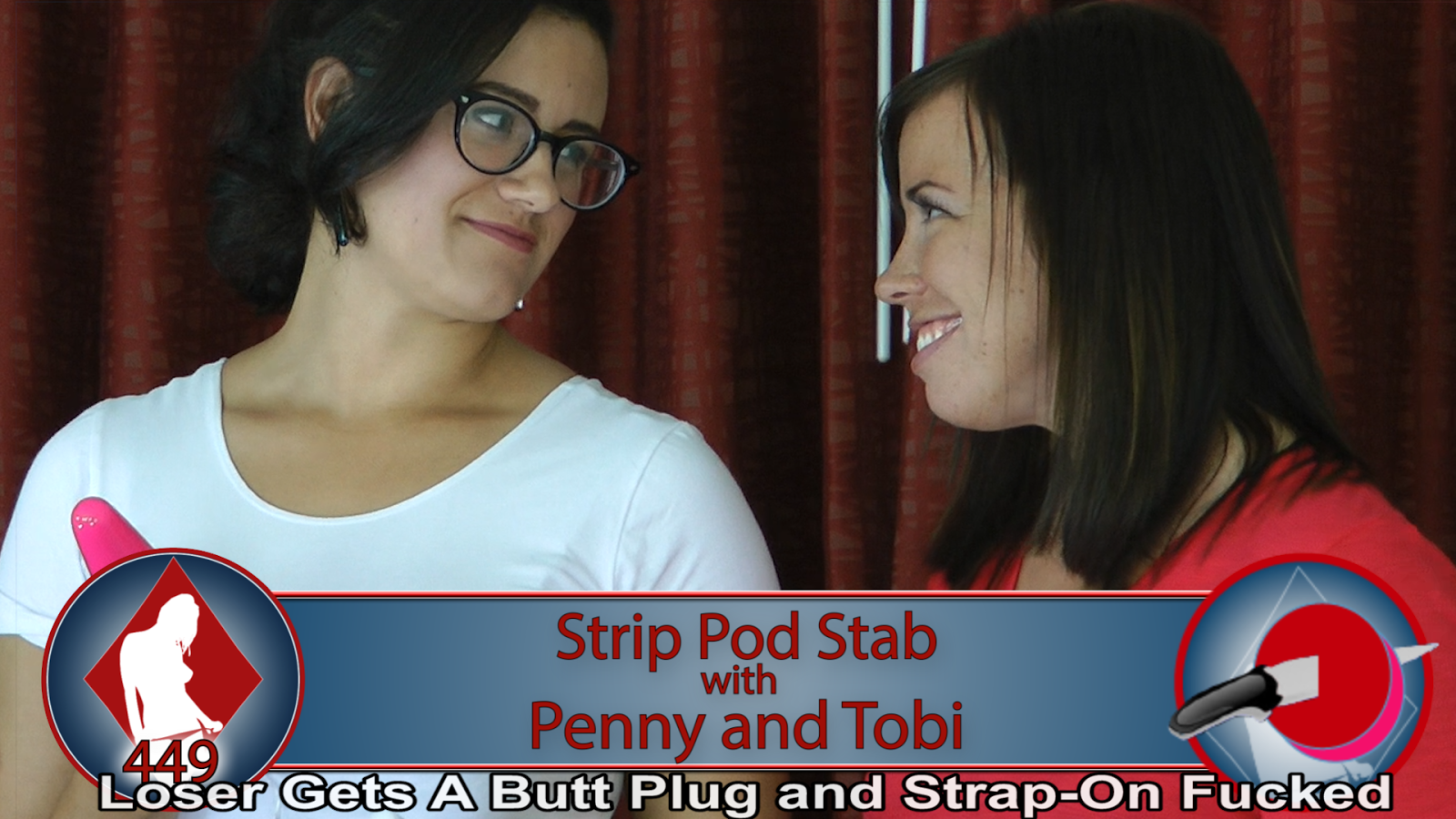 Why's it one of my personal favorites? For starters, it's got two of my favorite girls. Tobi is an extremely enthusiastic amateur who's taken to LostBets like a duck to water. Penny is incredible: incredible body, incredible brain, incredible personality, incredible everything, and I'm incredibly excited to bring her back after such a long absence.

In Episode 441, we did a game of Pod Stab where the players wore strap-ons, and the winner got to use hers on the naked loser. It worked out okay, but this time, it worked out way better. First, there were the girls. Not to take anything away from Kandii and Amanda, but these two have fiery personalities and competitive streaks that made them a pleasure to watch. And then, of course, there's the vibrating butt-plug that the loser gets in addition to her strap-on. Very, very good times.

We don't have a promo for Episode 450 yet, but it'll feature our first ever game of Magnitude/Earth and Fire with a male player. Humiliation for the loser. Stay tuned...

Hello Red, it would be nice if you finally give me an answer I have given you now already 2 messages last wrote is now been 10 days late. I imagined it differently I hope for a reply if you've ever read my two messages already. Yours sincerely Marco

Hi Red,
I think the waxing was the best forfeit ever. But it is not necessary to wax armpits too pussy and asshole is enough.
You could give a naked loser give the choice to get an extra chance by using the bexrule or even get 2 extra chances by waxing her pussy.
Therefore you could ask a nude looser "forfeit, bex, or waxrule"
If waxing is chosen the girl gets one article of clothing back after waxing.

Please give waxing another chance.
A loosing girl could be part of a game.
She has to stand idle braless her hands tied up behind her back with one bell hanging on a cord which ends are selotaped to her nipples. She must shake her boobs to make the bell ring.
Some blindfolded players have to search the bell in the room and get the bell from her body.
Who gets the bell can choose an opponent to remove an article of clothing.
Then the girl with the bell searches another place where she stands idle the bell is attached new and the next round starts.

You could also play this as a game with two couples, where the boyfriends take turns in getting a bell from their girlfriends while the time is taken. The boy who had the shorter time wins and removes one article of clothing from the other boys girl.
You could also play this with three girls one gets a bell hanging on a necklace. The other two get blindfolded. The girls are only allowed to move on allfoursA loosing girl could be part of a game.
She has to stand idle braless her hands tied up behind her back with one bell hanging on a cord which ends are selotaped to her nipples. She must shake her boobs to make the bell ring.
Some blindfolded players have to search the bell in the room and get the bell from her body.
Who gets the bell can choose an opponent to remove an article of clothing.
Then the girl with the bell searches another place where she stands idle the bell is attached new and the next round starts.

You could also play this as a game with two couples, where the boyfriends take turns in getting a bell from their girlfriends while the time is taken. The boy who had the shorter time wins and removes one article of clothing from the other boys girl.
You could also play this with one player having the bell on an a necklace while the others are blind. All players are only allowed to crawl on their knees. Touching the girl with the bell means you can choose one player ti strip. Each minute the girl wuth the necklace stays untouched she can strip one opponent. Who touches the girl with the bell gets the necklace and is now hunted. Would be fun viewing nude girls crawling on their knees.
Please answer to my suggestions.

@ swedishguy - His name is Brad. He's new to Lost Bets. Seemed like a decent guy.

How about playing a game of girls to two losers with a tickling forfeit. The to loser girls have to write on a card how many minutes they are going to be tickled but the other girl is not allowed to know. Both have then to endure the amount they chose. The girl that chose the less time is the loser of that game and has to endure a second forfeit.

Do you have any games with gangbangs in the pipeline? Also, are we going to see Starli in hardcore action again?

Thanks a lot,
Jai

@JAi - Yup. I remember at least one of those in the works.

Can't tell you for sure about Starli. I don't think we have any more of her in the production queue but we may see her again.

Hi Red (and others),

I saw this grat stripping game with a different setup/introduction. Maybe this can be an inspiration: Allgirlmassage:siri and jelena jensen volleyball mishap.

I am a bit scared that Red dont answer on such many replies .... Dave

@ Dave
I think Red has a lot to do, although I agree with you he should think of his loyal customers. Otherwise, he can lose his reputation. CptStar

Leave him if he does not answer in silence he has his reasons. As long videos come good. :[

@Red
If you read this do at least once an update why you have so little time.

Hi Red any news about pov this week seems its still missing. Would be very nice when you make a fast return.
SpeedyGonzales

Red (and Johnny, too)does a bang up job of responding to many of the questions and suggestions posted here... even the ridiculously stupid ones.

cut the man some slack, a whole lot of it, and enjoy the awesome vids he publishes for us.

I'm with Shredder. Red is awesome, puts out great content, and cares so much for his fanbase. There could be any number of reasons he hasn't been around as frequently the past few weeks. Cut him some slack.

Sorry, is the pov for this week just an repost from the main store. sorry red but thats terrible.

A rehash from the main store for POV, Red with little to no fan interaction and no explanation...it hasn't been a good start to the year for Lost Bets.

Wow no replies really after 1 week, Its sad for fans...

@Dave, Anon and all those concerned. My bad on the POV this week guys. I was in California visiting my kids and my lady friend for the past week. Before I left I set-up this weeks POV to be published but something technical went wrong and I wasn't here to correct it. Red has been busy with family obligations but he still loves you guys and he'll be back soon. In the meanwhile I'll do my best to provide some answers to any questions.

thanks for the update. Will you be able to upload the new POV?
PQ

@PQ - You bet. I'm working on getting it up there.

Any luck with the pov?