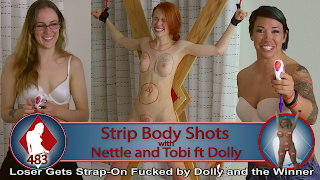 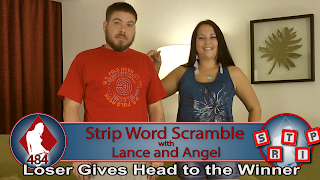 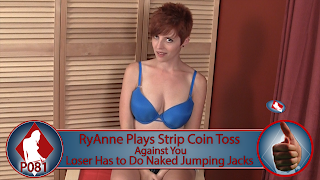 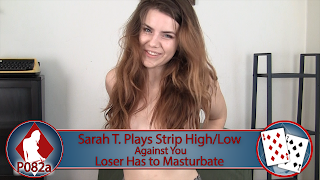 Multiple endings for this one.
Posted by Red at 3:36 PM

You continue to do great work and I'm sure Friday's update will be great.

One interesting idea for a forfeit if you had the ability to acquire one would be to force a girl to pleasure herself with a heeldo, it is exactly what it sounds like, a strap on that straps onto the heel.

I tried writing the same comment thrice yesterday but it always stayed on for a few minutes, then disappeared. Is something wrong with the blog or did I make a mistake, or was it even manually deleted for some reason?

Some ideas I'd love to see done (with an acknowledgement that some of them may not be practical):

Game: Earth/air/fire variant. Only two women, and they just take turns for increasingly longer intervals. Even better, play while -- hands hand-cuffed behind their backs while playing.)

I'll try one last time:
One idea: How about a contest for fans to participate? A number of LostBets girls will also participate, maybe five to ten, depending on how much of them are willing to do this.
In one post you present the girls who will play and in the comment section everyone can name one he or she would like to challenge, so that in the end, all the avalaible models will be paired with one commenter who wants to play.
When this is done the commenters have to send you a pic, where they wrote on their body "I lost my clothes to "name of the model" at Lost Bets". Then you choose a winner in each one vs one (totally random). If the girl wins the picture of the loser is published on the blog. If the commenter wins he gets a personalized picture of the girl having written on her body "I lost my clothes to "name of the commenter"". Also the winners get a free LostBets clip, or maybe two to really justify them risking to be humilated on a public blog?
Not sure if it's doable, also, most blog visitors probably don't come to look at pictures of other guys. Well, just thought it would be interesting.

For the girls:
Both girls are tied up on their knees or on their backs with their legs spread. The 2 guys ask them trivia questions. Losers have pieces of clothing cut off, and the loser is used sexually by both guys (BJ or sex).

Both guys are tied against the wall. The girls ask them trivia questions. The loser has items of clothing cut off, and the ultimate loser gets kicked in the nuts (I know this is extreme for you, but the stakes would be high!), and the winner maybe is pleasured by both girls. ADDENDUM: Maybe every time a guy gets a question right, the girls rub on his dick a bit?

Anyway, love to hear your thoughts.

Thanks for reading, Red, keep up the great work!

I've been waiting to see RyAnne do topless jumping jacks... LOVE this kind of busty forfeit!