Five softcore girls return today in Episode 550. Kimber, Jasmine, Jennifer, Paige, and Kimber are back, and one of them is going to be humiliated at the hands of the others.

Speaking of softcore, I did another shoot last Tuesday. It was sort of a comedy of errors, with some girls backing out at the last moment and other girls backing out after the last moment, but as is usually the case with these things, everything worked out fine. New girl Stefanie (not to be confused with Stephanie or Steffanie) was great, especially considering that it was her first time ever getting naked on camera. She was nervous and shy and wouldn't risk overly-sexual forfeits, at least not for now. That's okay, because we had some freakin' great softcore forfeits. Want to see a picture of Stefanie? Here you go: 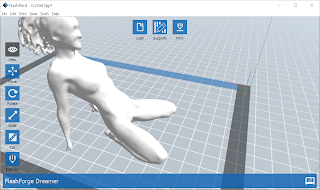 I mentioned awhile ago that I got a 3D printer, which is awesome. (There have already been 3D printed parts in some of our episodes, like the dreidel from Episode 545.) Well, I got a 3D scanner as well, sort of. It's actually just a Kinect, but it does a damned good job. The loser of this particular game had to let her nude body be scanned in three different poses. (Oh, um... spoiler.) The 3D models will be made available for anyone on the Internet to download for free and enjoy Stefanie's curves.

Speaking of Dreidel, I liked the idea of special holiday episodes so much, I did another one. Since the last one was for a Jewish holiday, I figured I should throw in ones for the gentiles as well, so look for that episode come Easter.

Sharp-eyed viewers will have noticed that I've been gone a lot lately, and also that there have been no POVs for the last few weeks. The reason for the latter is sinple: I ran out. We've published almost all the POVs we've got and I'm slowing the publication schedule until we can shoot more. As for the former, I've been pretty sick lately, which has kept me away. Hopefully I'm on the mend. Also, I've been distracted by girl troubles. If you're not having girl problems, I feel envious, son. I got 99 problems, and bitches are about six of them.

Hey Red,
I hope you feel better and that your personal life gets settled down a bit. Is there any update on b-sides? Thanks!
-Joe

Wasn't Leilani supposed to be the girl for P147?

Just be glad you have a girlfriend to have girlfriend problems with! I've been broken up for over a year. More time for clips, though, so there is that.

How long till the next hardcore game

"I got 99 problems, and bitches are about six of them."

If you've got six bitches, then I think I see your problem.

Small problem -- I can't see the black text on navy background on the clips 4 sale, especially the hd ones.

I'm just glad Red is okay and hasn't been hit by a bus while the auto queue took over.

Sorry to hear you're ill and have other problems. I hope it turn out well.

I'm seeing some problems as well in the clipstore. Looks like something goes wrong with the html tags.

Of course I will ask my usual question ;) : when's the next b/g forfeit?

Any update on the plans for a large group game?

I'm sorry to hear about your health and personal troubles. Hope things get better soon.

If you're keeping a tally, I've noticed the HTML problems on PCs, Macs, and iPad. Th most recent one seems fine, though, at least on Mac.

You could always do the ballbusting threat POV

Hi I have noticed that episode 531 is missing and you can't buy it is there a reason why ?