Next week, it's a coed game of Earth and Fire in Episode 553. 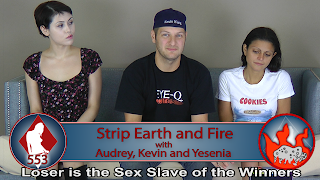 Good to know you're back up.

Mind if I ask when the pov for leilani (P147) is coming up? Thanks!

Where is b-sides? Why is it being ignored?


Good thing you're back and okay. Health is the most precious thing to have. Hoping you'll do fine.

Tyler is very very nice. How many more games did she play in? Hoping to see her lose at some point.

Any news regarding the POVs? Not to rush you (i understand if you ran out that you can't just magically create some new things) but it would be nice to have an idea if it's a few weeks or not until next month... I admit I'm looking forward to Leilani or Endza you announced.

Take care and keep the good work.Good luck for your "girl troubles".

Hello. I'm by no means your most devoted fan but good to see you back. Hope you're over the worst of your troubles. Anyway, I wanted to suggest a game- idk if you're taking suggestions or looking for fresh ideas or if you're happy with the tried and tested formats, and admittedly I haven't thought too much about the logistics of this, but here it is. A game I was a big fan of is Earth and Fire- it's fun when a climax is part of the game's objective rather than as the forfeit. I've had an idea to tweak it slightly as a different game. Three girls take it in turns to control the timer. The girl who controls the timer picks a time between one and sixty seconds, and sets the timer. A random selection is then done to determine which girl will be ganged up on by the other two. This adds an element of risk to it and makes it like a game of chicken- the players will have to pick lengthy enough amounts of time to make their opponents orgasm, but risk orgasm themselves if they pick a high time and are selected themselves. Sound like a game that might be played in future? Thanks for your time.

I'd appreciate it if you can host a strip memory game where all of the contestants are wearing pants or shorts over their underwear. I think there were two girls so far that did that and those were great.

That's what makes memory game different than the others - is that the cards drive the strip sequence rather than the players, and it gives a chance for unusual out of order strip sequences that players won't normally do.

It has been a while since I last made a suggestion. I have suggested in the past that new amateur models have to do jerk off instructions as a forfeit. I think it would be interesting to see what a true amateur thinks would turn the viewers on and I also think it would be embarrassing for new models to think of what the fun is for viewers of the videos.

I have thought of another way that the amateurs could be embarrassed. Especially younger ones who have not been exposed to a lot of porn. That would be to have one guy for each amateur. There would not have to be a hardcore forfeit but the following would play out as the game progresses. When the game begins a moderator would state something along the lines of let me show you what the viewers of this video will be doing. Then as the game progresses and a contestant looses an article of clothing, the male assigned to that model would show how his erection is growing by the sight of her ever nuder body. The guy should hold his orgasm till the looser is completely nude. Especially great if the orgasm were timed when the amateur was giving revealing looks of her pussy.

Inspired to this idea of guys showing their reaction to the models by a UK site called Lady Voyeurs. It has no male female sex but shows the reactions of male models to the female models.