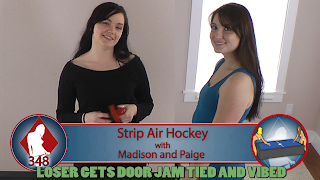 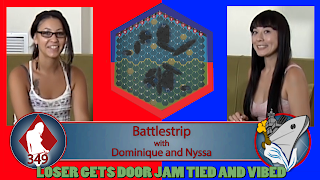 Then next week, it's a big one with Episode 350. I've tried to do something a little special for the mid-century episodes, and this one is no exception as perennial favorite Amber is back to take on newbie 18-year-old Jennie. Usually, when there's a new girl (especially one who's never been naked on camera before, especially one who's so young) I try to ease them into it with relatively tame forfeits, but when she heard that the game would be Basketball, Jennie got confident and said we could make the forfeit whatever we wanted, since she was sure she'd win. And there have been a lot of people asking for a repeat of this particular forfeit since we last used it in Episode 197, so here it is. 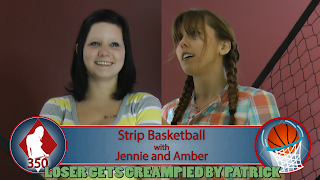 Then, the week after that, Paige and Madison are back for their fourth game, and if the girls thought that things got sexier with the doorjamb vibrating, they ain't seen nothing yet as we break out the Sybian for Episode 351. I'm not sure it's appropriate to keep using the Sybian as punishment. The girls are usually very apprehensive when they see (and hear) the device, but when it's actually used on them... nearly every single time, the exhausted "loser" collapses off the thing and says, "I gotta get me one of those!" 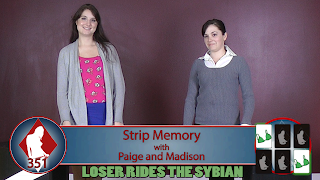 Got some good stuff coming up. Hope you like.

your work is great.

the idea of making a posing contest called "MissLostBets.com". Is great. The winner can choose forfeits on the defeated competitors.

The idea was from ashleyformisslostbets.com

judge of the misses.

yeah the idea of an posing contest sounds great to me. You could vary it by making a "StripContest" where the girls have to perform a hot strip show.
The winner can choose forfeits on the defeated competitors.

What about using one of these sex toys in one of your next videos?

I like these. It's a lot more varied than the last few months at least with the forfeits.

Can someone tell what what cream pie is.

Read, I fear I must be a terrible person. I want both Jamie and Amber to lose!

Glad you've got some good stuff coming up. Still hoping for that pubic hair as last item of clothing forfeit, though!

All my best wishes,
TrueS

Sorry, Siri is playing tricks on me!

@judge of the misses and @Stripclubvisitor, maybe. I tend not to like games where the scoring is subjective. So if it were a strip contest or a posing contest, who chooses the winner, using what criteria?

@Jum-Jum: I'm glad you like that upcoming episodes. Hope they don't disappoint.

@TrueS: You're not a terrible person for wanting them both to lose, although it's Jennie, not Jamie. Fortunately, Episode 350 is the first game of several they played, so it's unlikely that they'll both go unscathed. As for the pubic-hair-as-clothing thing, bekueve ne I want to do that too, but so far I haven't had the chance with two players neither of whom was shaved. When I get the chance, it will be done.

*Unlikely that either will go unscathed, not both. It's dead certain that they both won't go unscathed.

Asked for a double update (esp with the two pairs coming up) a couple weeks ago. Thanks, you're the man, nothing else I can say. Can't wait.

for a "MissLostBets.com" contest you could show normal photos (which means the girls are clothed at the photos) of the competitors which are rated at your site by some users.
You could also load the pictures to some voting site like http://www.voteformyphoto.com
At the photos the girls stay of course clothed.

I think both ideas would work. I think you could talk some girls to let you make some normal photos.

judge of the misses.

what if we chose the winner or winners by voting? I know it may take a while, but hey, it would be fun.

1.
As for a real hardcore game/forfeit.
(Just thought of this yesterday)
I would like to see 2 girls in a room filled with boys.
These could be the 2 losing girls of a previous game starting a new game.

Everytime a guy orgasms the other girl has to take off a piece of cloting. If girl 1 manages to do this within the set time she gets to have her way with the naked losing girl; girl 2.

If she doesn't succeed, girl 2 gets to have her way with girl 1.


2.
There have been many suggestions lately. It would be to write or print all these suggestions and put them in a bowl or jar. Then none of the girls would know what forfeit they are playing for.
The losing girl has to draw a piece of paper with a forfeit from the bowl and this way "seal her own faith". She has to give the piece of paper to the other girls and they have to show it to the camers so the winning girls and the "audience at home" get to know what the forfeit is before losing herself does.
Best would be if the winning girls just perform the forfeit without informing the poor loser. :)

On the Lostbets site the new video is the one with the birthday party, which I hadn't seen. And it was fun, the party ones always are, sexy but funny.

The end where that guy wearing the birthday cake goes over to give the other guy a hug is the kind of shit that makes me keep coming back.

Thanks for this update, door jamb orgasms are my favorite forfeit. Keep up the good work!

That was great I loved Paige's arse banging against the door as she was squirming around under the massager!
Furrychris

348 was excellent with camera angles and editing.

@Impatient: You're very welcome! But really, the thanks should go to Johnny and Quarry, who've really been kicking ass on editing and postproduction, building up the ready-to-publish queue enough that we can afford a few double-update weekends without fearing running out of material.

@PP34: Not a bad idea. I've gotten requests for orgasm control/denial before, and this might be a good way to fulfill them. I mean, seriously, 4 out of 5 times the "loser" says "I've gotta get me one of these!"

@judge of the misses: Could work. There often isn't a lot of lead time before a shoot to post pictures and let people vote, but I'll see if I can do it.

@abk08: I have no idea. I think she's from a stock photo the guy who runs that site found. Personally, I think it's a little dodgy to have photos of girls who aren't actually on the site, but that wasn't my call.

@Kevin: The problem is that if I film the girls posing or whatever and then put the pictures up for people to vote on, well, at that time the shoot's over and there's no way to do a forfeit or anything like that. @judge of the misses's idea, getting pictures of the girls before the shoot and letting people vote, might be the only way to do it.

@GWKS: That was a really, really fun day. And Mark's birthday shoot was one of the highlights. I'm glad you liked the way it turned out.

@Furrychris: She did have a great reaction, didn't she?

@CA Fan: Thanks! Lately I feel like things have really been clicking in production. We're much more cognizant of what kind of angles we'll get when we set up our cameras, and as I said, Johnny and Quarry have been kicking ass with the editing.

Red,
Maybe when the forfeit is to use the sybian it should come with a spanking or some goo thrown over the girl in question?

Hey, this is the Youtube Guy: I was the one to suggest the doorjam cuffs to you like a year plus ago, does that count for any free episodes? :P

I think the miss vote would be great like judge of the misses suggested.

His second idea is also great and you should give the strip contest a chance.

You could invite some guys to view the strip show you give dollars to the guys. The girls dance in front of the guys all at the same time. The guys can give dollars to each girl (you know like in a strip club). Each girl tries to get as much dollars as she can from the guys. The girl with the most dollars wins and has her way with the losing girls

the idea of a stripcontest sounds great to me.

please please do it red.

I understand it if you can't find a public location that would allow you to do a walk of shame. And a while ago you said you didn't want to press your luck with the local delivery drivers in terms of an answer the door naked forfeit. However how about you have an answer the door naked for a bunch or regular guys. It could be augmented by a song/dance performance or an exercise routine or something even dirtier if you prefer. Also you could consider having a girl have to ring on a neighbor's door (either at a hotel or a private residence)

@Furrychris: Maybe, but tossing in something like a spanking seems a bit anticlimactic. Never fear, I've got some ideas for making the Sybian forfeit more of a punishment.

@youtube guy: Citation needed, but sure. Email proof that it was your suggestion along with one doorjamb cuff episode you'd like for free.

@stripcontestfan and @Hector: It's a real possibility. I'll see if I can squeeze it in an upcoming megashoot.

@K: Don't worry. More pizza delivery drivers and other lucky members of the general public will soon get to enjoy the sight of girls who've lost their clothes at lostbets.com.

is it possible to see sara liz at lostbets.com. it would be great to her play (and lost *gg*) games. is there any chance to see the Snippety-Hop Race with candle, catherine, ashley, zayda or maybe sara liz? and dont foget about the walk of shame with an red spanked ass for the losers! ;)

hey Red, massive fan of the site. Is there any chance of Erica doing a more hardcore forfeit? preferably a bj?

@p131213 and @Anon 5:15 (please sign your posts): Sara Liz? I just got an email from her a couple of days ago saying she was going to be in the Seattle area and wanted to play at LostBets.com. Unfortunately, I'll be out of town while she's in town. She says she'll let me know if she has future travel plans to my area, and if our schedules mesh, I'll definitely try to get her in front of my camera.

@mastachef: Thanks! I'm glad you like the site. Unfortunately Erica's been pretty clear that her limits have tightened and she's not interested in hardcore forfeits. I can and will keep trying to change her mind, but no promises.