Where does he get those wonderful toys?

Today's update, Episode 395, should make anyone who's wanted to see Ashley back in the games happy. She's facing off with Brooklyn and Bob against Olivia, Ashlyn, and Flynt. It's a high-stakes, high-energy game of Strip Darts, and a device that we've never used before appears in the forfeit.

I mentioned in a blog comment that we did two shoots this last weekend. I think the footage we got was the most technically proficient we've gotten to date, and a big part of the reason is Hippo, who's been my friend since elementary school. Hippo's a wizard at making things, and made a bunch of cool toys for us, including the LostBets.com paddles and the memory/clothing cards. Today I want to highlight two of the newest.

I said in an earlier blog post that we use seven cameras when we shoot, but that's outdated: we're now up to 8. How do we keep an eye on all these cameras? Well, until recently, we couldn't and didn't. We could only monitor a subset of the cameras and hope for the best. Frequently, in editing we'd discover that one or more angles was or became useless. I always consoled myself with the notion that with seven cameras at least one would probably be usable, but it's always sucked to know that we missed out on some good angles and there was nothing we could do about it.

Until Hippo built us this bad boy: 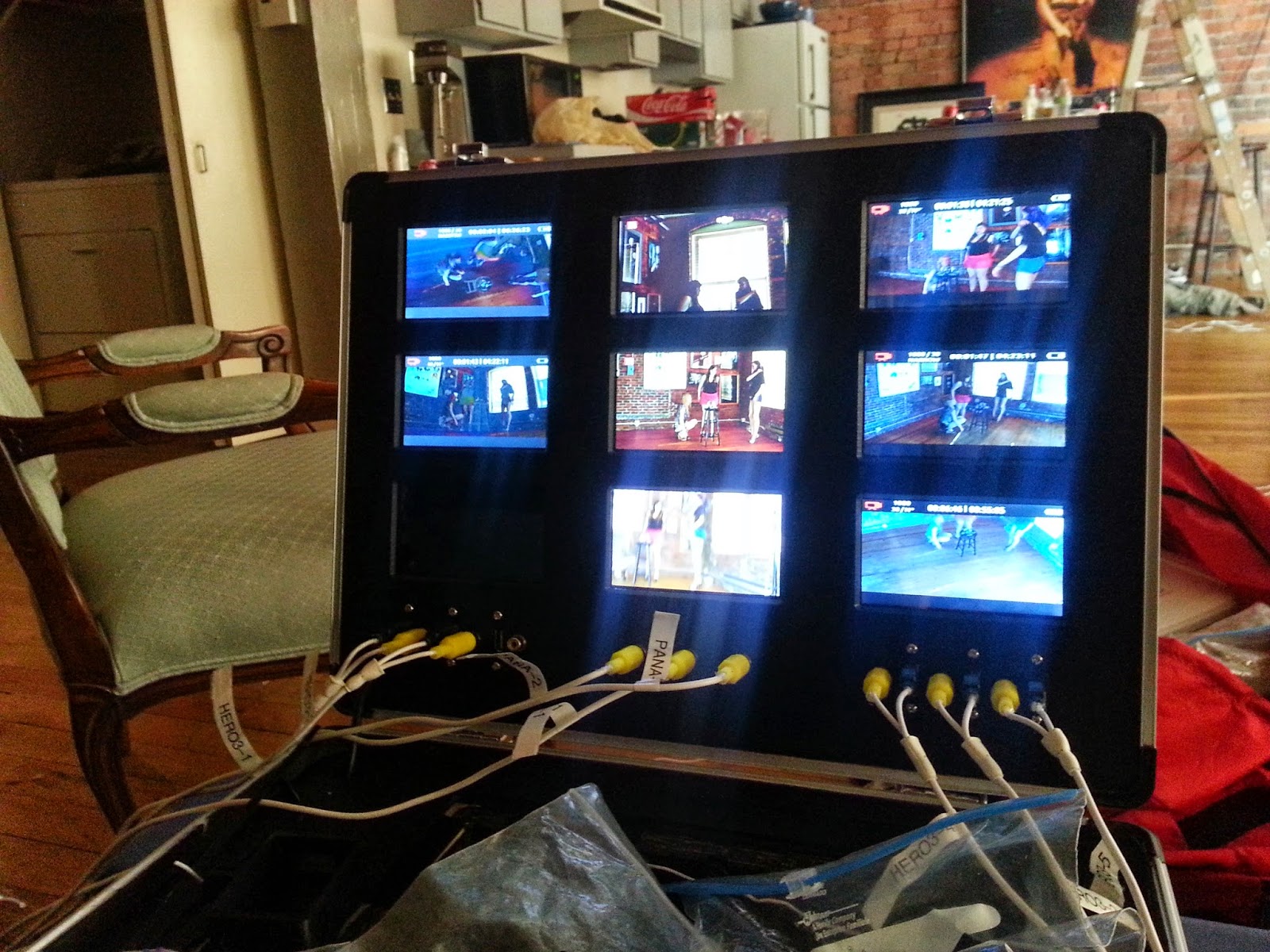 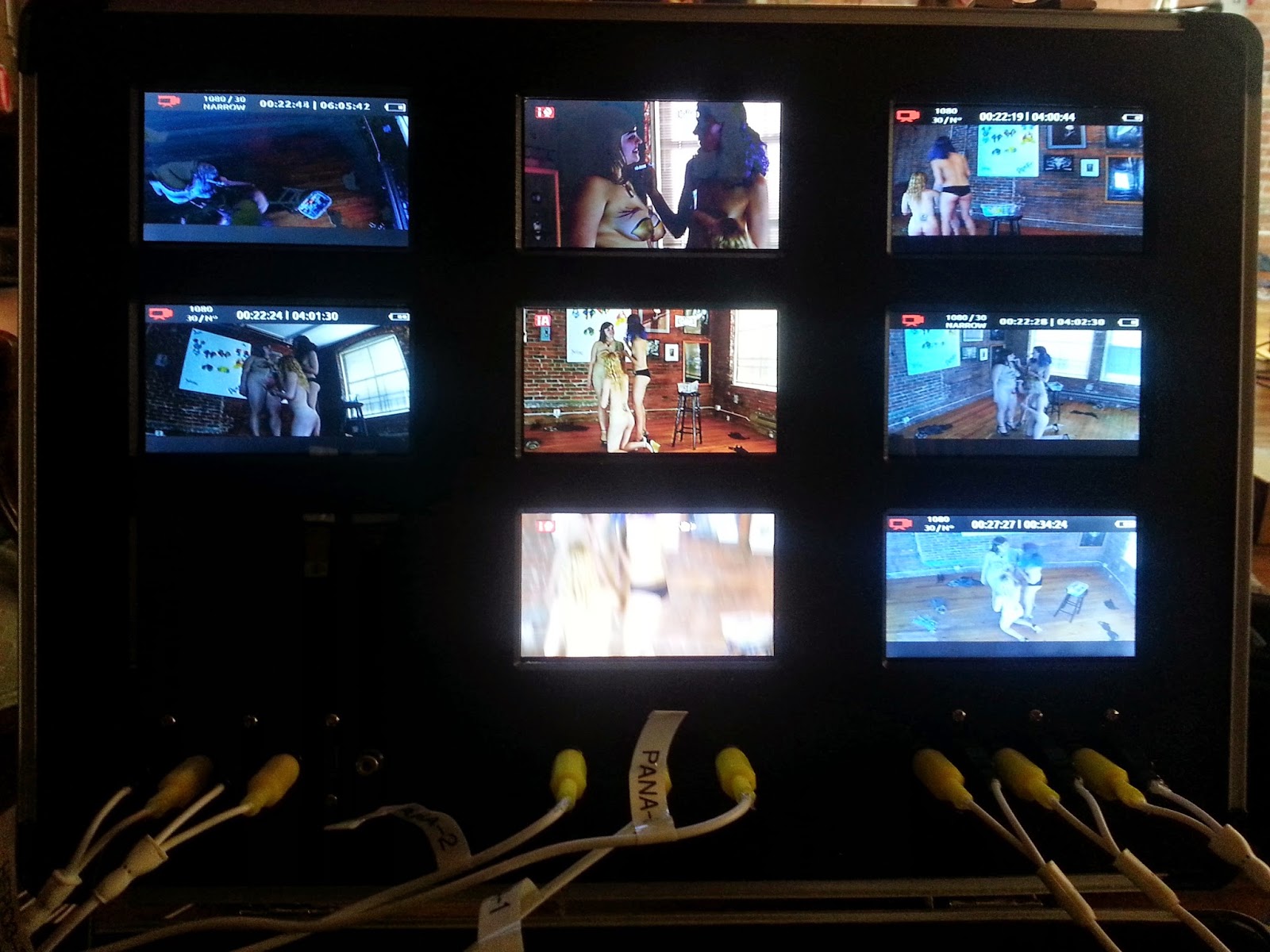 Pretty sweet. But what good is seeing what the camera sees if we can't do anything about it? Many of the cameras are handheld or on tripods that someone can adjust, but several are mounted up high or down low or in the actual scene where a cameraman can't go. It's happened more than once that we'll carefully position an overhead camera, and the players will move somewhere else. So Hippo made
these radio-controlled pan-tilt GoPro mounts. 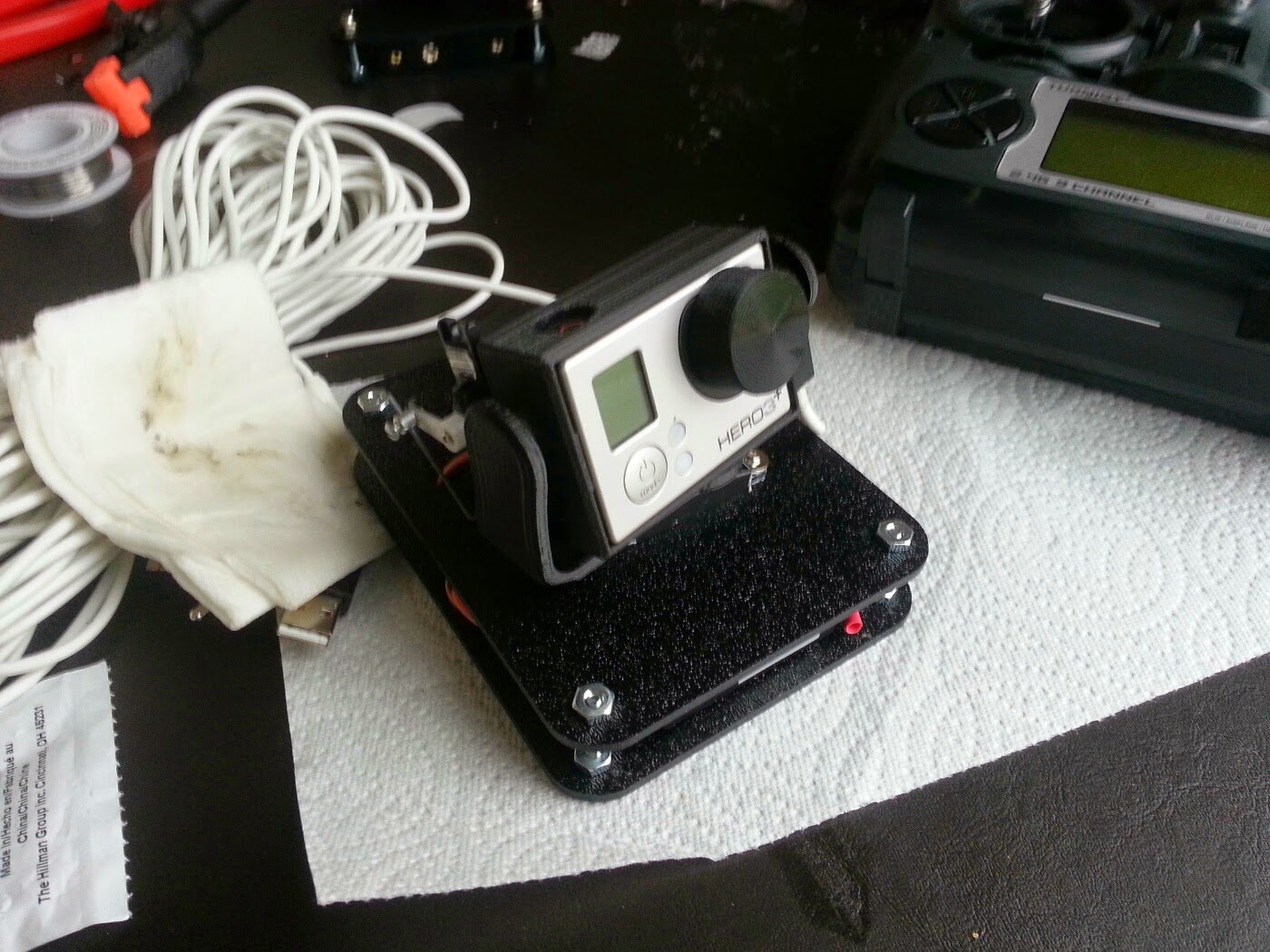 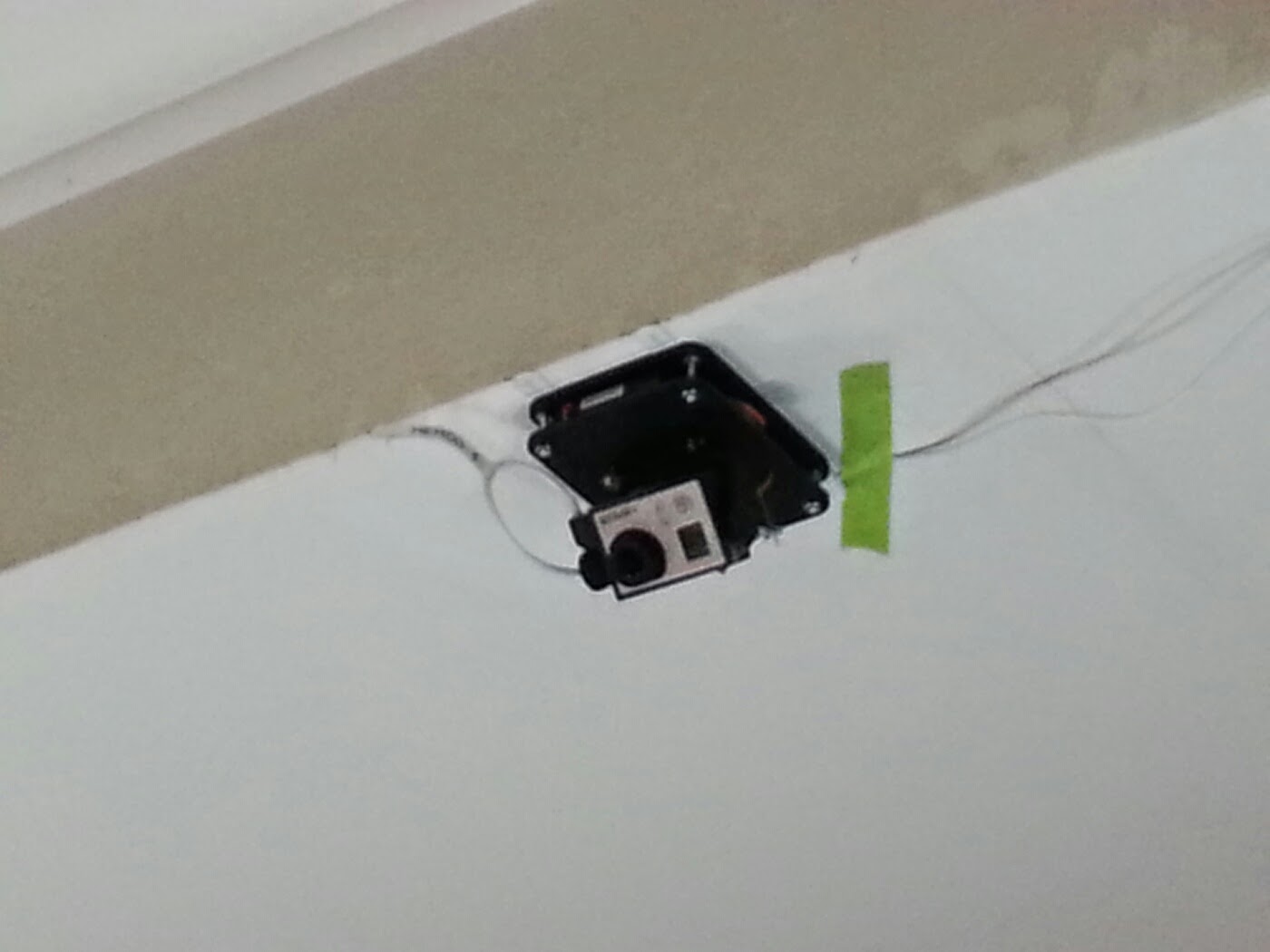 These have made a huge difference. Frequently we have a "game area" and a "stripping area", and an overhead camera had to be pointed at one or another. Not anymore. Each mount even supports a couple of presets, so we can switch between game area and stripping area at the touch of a button.

So if you notice higher-quality films with better angles and fewer missed shots, thank Hippo.

WHat I meant to say is that Dante gives a good interview. You should consider a naked interview with super embarrassing personal questions for the loser as a soft core forfeit.

Would love to see more WAM on lostbets. A game that I think would be pretty cool:

2 teams of 2 (guys, girls, or mixed), starting fully clothed. They then have a race to burst slime filled balloons by pressing their bodies together with the balloon in between. The winners of each round (first to pop the baloon) carry on, the 2 losers lose an item of clothing.

I like K's idea of a naked interview as a forfeit. It could be made even better if the interview is done in very embarrassing positions such as spreadlegs or during naked calisthenics or yoga poses.

@Obelix: If I really had my 2 cents I would combine the interview, posing and forcing the loser to say embarrassing thing. (i.e. variations of I lost all my clothes at Lost Bets.com)

@K that was exactly what I had mind.

Seconding the call for more WAM. WAM + bondage in one forfeit would be amazing.

This is a great video. Always thought Ashley was sexy as hell but seeing her really get into it the way she did was off the charts. Also loved Brooklyn, she is the definition of cute and sexy. Would have loved to see the other girls lose too but this one was among the best ever.

Hey Red,
You haven't teased what's in store for 398 yet. It's starting to make my curiosity itch, can you relieve some of the suspense?

Red,
How did your meeting go with those new girls yesterday?
-Joe

@K: You're right, Dante does give a great interview. Way better than my own fumbling attempts at interviewing, although his willingness to appear in frame helps. There are more Dante interviews to come.

@MrMess: There will be more WAM to come. The next WAM will be Episode 397, in two weeks.

@Obelix and @K: I definitely like the idea of naked interviews. Could be a great part of the forfeit for less daring girls.

@damndable: Yeah, mixing WAM with bondage would be pretty rad. I'll do it next chance I get.

@Anon 8:07: Thanks! I'm glad you liked it (although please sign your posts) and I agree completely about Ashley.

@JustAnyOtherGuy: You're right, I haven't. It wasn't an oversight, it's just that I jumped to 399 as part of the runup to 400. 398 is the last of the set with Addie, Kandii, Lela, and Dakota, playing a new game of smarts: Profanagrams. I'll publish the promo on Friday.

@Joe: That was a week ago Monday, not yesterday. It went great, although sadly the cute young black girl couldn't make it. Maybe next time. This time, it was just Indigo, her sister Luna, and their friend Lavender. You can see them on the monitors in this post, if you look closely. Neither of the latter had ever been naked on camera before, and we found some great forfeits for them. Used a few suggestions from the blog, too. I love doing that.

Red, thanks for these cool looks behind the scenes. I find that stuff fascinating.

Any chance of the Easter bunny bringing us a double update weekend?

whats the plan for povs. are they still coming back next week

what are the forfeits in episode 400?

I would like naked interviews as well. Make girls with tight limits sit legs spread with the interviewer right in front to examine it all. And ask questions like "Who was the first to see/touch/spank/fuck this part of you?"

Also I would like to say that Ashley Edmonds did a great job one more time. Only thing missing about her is someone who fucked her hard on lostbets.com. I would do, but I'm sure Johnny or Dante will be interested as well ;-)

@CeeJay - Ashley is actually Dante's ex GF, and they aren't likely to be willing to spend any intimate time together, either on or off camera. I'd be glad to handle that particular job myself if we can ever convince her to risk the penalty. She is a lovely lady and a very cool person.