In case the title of this post isn't obvious (it's not), it's supposed to be the Star Wars theme. I'm actually not going to see it today (got too much shit to take care of), but I'm looking forward to seeing it soon, and I'm cautiously optimistic that J.J. Abrams can fix the atrocities inflicted on the franchise by George Lucas. If you haven't seen the Plinkett Reviews of the prequels, or of the ST:TNG movies, or of just about anything, I highly recommend them.

Sorry for the nerdiness, but it seems appropriate on a day when we're introducing Rose. I can't help it, I love nerdy girls, especially the type that are highly sexual and wild. She joins other newcomer Anneliese in Episode 495, playing Strip Freeze with the trusty ol' cock gag making an appearance for the forfeit.

And I finally have some new promos to share. To start with, next week we'll see Episode 496. 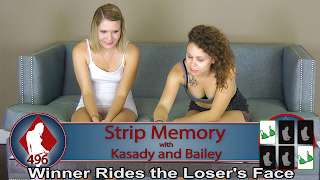 We paired one of our most demure new girls, Kasady, with one of our wildest, Bailey. It's a game of Strip Memory, where the winner gets to ride the naked loser's face. It's a good game and a good forfeit, and it's a great lead in to their next appearance, in Episode 502. You don't believe what happened then. I want to give a grateful shoutout to Bailey, who came up with the idea... but I'm getting ahead of myself. That won't be until February. 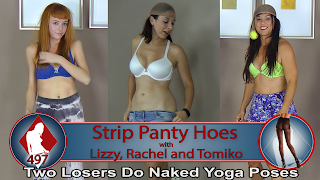 Cute tiny redhead Lizzy and Semitic goddess Rachel are back, and they're joined by Tomiko. Tomiko is the oldest player we've ever had at the time she was filmed, although you'd never be able to tell by looking at her tight, toned body and perky tits. Tomiko and Mo are, I think, the only players we've had who are older than I am, and oy, I should look so good. They play a new game I made up, called Panty Hoes. and if I wasn't already going to Pun Hell for Strip W.H.O.R.E.S., I definitely am now. The girls wear pantyhose on their heads, with tennis balls in the feet. (Actually, due to a procurement error, they're using thigh-high stockings rather than pantyhose. They worked.) They each have a row of water bottles to knock down, and the have to swing their heads to make their tennis balls hit them. It was a pretty fun game, and I'll have to use it some more.

All three of these girls are reluctant to do anything too naughty in front of the camera, so it's a relatively tame forfeit: yoga poses. The winner had a hell of a good time, taking great glee making the losers hold unbelievably revealing poses while she leaned in closer for a better look.

Loser of the next game has to watch attack of the clones and doesn't get a pizza roll.

If you can get enough nerdy girls together, how about some nerdy games, too?

Perhaps chess. Since "real" chess takes too long for your purposes, how about bullet chess:

Or some mathematics a la Mathcounts? (Skip to 26 minutes into the video for the rules and the beginning of the competition):

Spelling bees could probably be adapted as well

No spoilers for Force Awakens, please. Going to see it in a few hours.

@FOJ: MATHCOUNTS!! Jesus Christ, I did that when I was in middle school. I still have my trophies in a box somewhere. I'd like to do more nerdy games (also some more trivia games with the questions @RS came up with) but it's tough to get smart girls who are also willing to be naked on camera together.

I was supposed to see it today but I ended up out of town at a party...everyone had to tiptoe around discussing it because they didn't want to spoil me.

Have 3 girls competing in yoga.
Each round you draw a card with a yoga pose.
The girls have to adopt the pose and hold it.
Girl who is no longer able to hold the pose looses the round and has to remove one piece of cloth.
First naked Loser gets posed by winners.

@PQ - Awesome Plinkett references! Tell me where to mail you a pizza roll!

@Yogaposer: I like it. The only thing is that it's the sort of game where the players need to be reasonably well-matched for it to be any contest at all, and if not, it's likely to be a blowout or a shutout. But when I've got two or more girls who look like they'd be equally good (or, and perhaps more entertaining, equally bad) at holding yoga poses, I'll give it a try.

Hi Red, I hope you're well. Any likelihood of someone invoking the Bex Rule at some point soon? Seems ages since it was last used.

@TrueS: Doing all right. Been a pretty hectic end-of-year, but things are looking up. I hope you're well, too. As for the Bex Rule, I don't have any invocations recorded at the moment but hopefully it'll come up again soon. It's getting tougher, since pubic hair seems to have gone out of fashion, and girls with bushes worth shaving have gotten rarer. But I'll keep looking for 'em.