Since I been gone

So today is Episode 493, featuring the return of Monica and Kasady. (This is the last game these two, but both will appear again against other opponents.) One of these girls will be experiencing a Sybian for the first time. Since I didn't promo this one yet, here it is.


Next week, we'll see Episode 494, with Briella, Chanel, and Krystal back for Round 2. 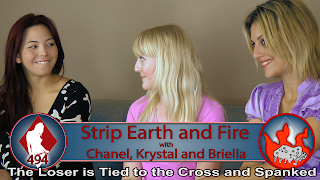 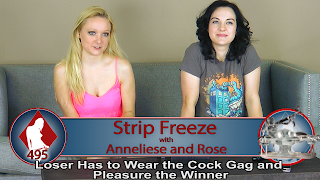 They play Strip Freeze (again using Marvin), and for the forfeit, we break out the cock gag, which has been absent for awhile. In the past, we've used both wearing the cock gag and getting fucked by it as punishments, but both girls were intrigued by the cock gag and thought it would be hilarious to make their opponent jam her face back and forth into the winner's pussy while she taunts the loser, so that's what we did.


(Before I'm asked, I don't have any updates this time on the POV store. But there are some new ones coming up that I think are pretty good.)

Last time I blogged (too long ago, I know) I mentioned that I was doing a shoot that weekend, and it's time to tell you how it went. We had three girls, all amateurs. Two had never been naked on camera before. One had, but... well, read on. (I should add, or maybe I shouldn't, that these are real women with real bodies, and real bodies aren't usually perfect.)

I have to be honest: I'm a little uneasy with calling her an amateur. She's never been naked on camera before, but she has worked as an exotic dancer, and so she's at least used to having strangers see her naked.  But she's cute: the very picture of the voluptuous black woman with the bubble-butt and purple makeup.

Then we have Cora, who hasn't been a stripper and was both nervous as hell and uncontrollably excited.

Seriously, I've got a candid promo of her I'll publish soon. It starts with her watching as Johnny, Hippo, and Ferret set up the equipment. She's so nervous, she's wringing her hands and taking deep breaths to try to calm down. It's extremely cute. She then tells a story about a game of Strip Spoons she played with a big mixed-gender group, including her sister. The story ends with her sister pointing a knife at her and demanding she finish the game... but you'll see that, too.

The third girl has, like I said, been naked on camera before, but only once. And that once was with us.

The last time we saw Jennie, she was just 18 years old. People have been asking me to get her back ever since, and I'm happy to oblige. Now she's 21 and she's a mom. Among other effects of childbirth, this has made her boobs grow bigger. They look even better now.

That was on Saturday. On Sunday, Cora returned and brought someone else with her, but that story will have to wait for now.

@Anon 8:12 (please sign your posts): It may be possible some time in the future, but this last shoot was strictly girls. (The next day involved a guy, but not AngieJo.) I'm glad you find her sexy, though. I don't know if she reads the blog but if she does I'm sure she'll be pleased.

I was just wondering what the limits are for the new girls and what forfeits they were prepared to do.

Also I like the forfeits where the girls are naked in front of strangers (e.g Pizza Delivery). Are there are of these coming soon?

I did post some suggestions in September how these could be livened up, I would appreciate your thoughts on these:
1) Loser(s) gets dressed and performs a strip for the Pizza delivery man.
2) Loser(s) gets dressed and asks Pizza delivery man to undress her.
3) Loser(s) find strangers in a hotel and perform a strip for them but you also film them asking the strangers in the bar if they would like to see them get naked.
4) As number 3 but guests undress the loser(s).
5) As number 3 but guests get to grope the loser(s).
6) As number 3 but the guests are invited back before the game and get to watch the whole game.

@The Foxer: The girl with the tightest limits was, I think, Cora, who was taking her first tentative steps into unknown territory. Given that, she was willing to risk some pretty sexy forfeits. She did nix the idea of oral sex with another girl. She also didn't want to be "fingerblasted" in a game of Earth and Fire, so she suggested that the players use toys rather than fingers and tongues. This worked out exceptionally well and I may use it in the future even in games where the girls are willing to do without.

I'm pretty sure that AngieJo and Jennie would have been willing to risk more. I'll see how much people like them and want to see more of them before asking just what they'd be up for.

I love doing the pizza guy forfeits. Unfortunately I don't have any unpublished ones currently on tap, but I'll get more if I can. This latest shoot took place at a location where the pizza guy thing just wasn't possible, but I'm scouting out future locations where it definitely will be.

As for your suggestions, I like them, but I have some feedback. Sorry I didn't answer when you posted these in September, but as quite a few people could tell you, my responses to blog comments have been sporadic at best, especially over the last year or two.

Numbers 1 and 2 destroy what I think is one of the best parts of a pizza guy forfeit: the look on the guy's face when the door is answered by a naked woman. Perhaps we could do this in a game with two losers: one loser stays nude and greets the pizza guy at the door, while the other gets dressed and is stripped by the pizza guy or strips for him.

Thanks for the ideas. If you have more, please post 'em.

i'm happy to see the return of Jennie. was hoping she would find her way back here. thanks for that.
also, thanks for finding some non pro girls. i'm looking forward to what the future holds.

a suggestion: i like the tied spread eagle tickle forfeit of several updates ago. can we have more of that?

also, an idea for a spank forfeit: have the one loser of a multi girl game (4players or better) submit to an OTK (a proper OTK, ass up at 12:00, head down) from each of the non losers.

More spread-eagle ticking, check. One of the games with AngieJo, Cora, and Jennie featured a game where the loser took an OTK spanking from the two winners. In all honesty, the spankings could have been better, but it's a start.

When can we expect the next b/g forfeit?

@Rene: I looked at the publishing queue and was surprised that I didn't have any b/g scheduled until early February. I'll try to shuffle some around and get some b/g published sooner, but if I can't, February.

Okay, I've rearranged some things, and now there will be a b/g game for Episode 498, on January 8. Hope that's soon enough. You'll get to meet Helena, which is nice.

Will there be any more scenes involving Cora as I think she is a natural for this site, a typical next door girl but very attractive,more strip games involving her please