Looking ahead, here's a peek at Episode 521. 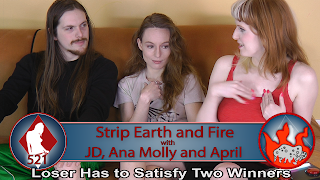 We'll meet JD and April (and reacquaint ourselves with Ana Molly) next week in Episode 518, playing the traditional simple-game-for-simple-forfeit I like to use for n00bs. In 521, they take it several notches, playing Earth and Fire. (I'm prejudiced, since I came up with the idea, but I think Earth and Fire is one of our sexiest games.) Whoever loses and is forced to orgasm has to finish off the winners, on their terms. So however it goes, all three players will get orgasms, but one will have the orgasm ripped from them as they try to resist, while the others will enjoy the servitude of the loser.


Here's another ILAMC promo for a girl we filmed a couple of months ago.  Meet Alicia.

hey rec theres still no b side for this week.

Kinda odd request or suggestion: Ever think about bringing back some of the old basic games you had early on like Bizz Buzz, or Screw Your Neighbor?

Hope all's OK. I think the gif thumbnail for the non-HD 517 on the C4S site is wrong; I'm seeing the one for 503 w Lela and Monica. Figured ya might like to know.
Cheers!

@Anon 12:54 I'm quite certain Red was only posting B-Side clips for the month of May.
Therefore, not continuing into June. It was only a May Madness special.

If you were to check earlier blog posts from late April / early May, you should find this information quoted by Red back then. However, I could be wrong, but rarely I am.

As usual, are there any POV updates?
Or you update it on Thursday?

Yeah. No pov on the site.

You could be wrong, and you say you rarely are, however you are at lest partially wrong guest. He did not promise videos for an extended period of time, however he did say he would post one or two video that last a checked yesterday had not been posted. Thank you for your attempt to help however.