Note: I'm behind in replies to the last blog post. Will get to them this weekend.

Anecdotally, most of you look at the spoilers before deciding whether or not to buy a clip. (Those of you who find clips through direct links don't have a choice, since C4S doesn't honor my style tags in those. Ugh.) If you're one of the minority who doesn't like spoilers, don't read the clip description for today's Episode 515 too closely. Don't look at the clip's categories, either. In fact, skip the next paragraph.

Got the spoiler-averse back with us? Good. Let's talk promos. 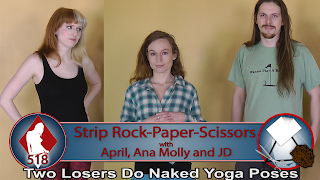 JD and April debut in Episode 518, along with the return of Ana Molly. It's a simple game with a simple forfeit, which is what I like to do when introducing new players. Nevertheless, this will be the last time I use this particular game/forfeit combo for awhile. There are other simple games besides rock-paper-scissors, and there are other simple forfeits besides yoga poses. Variety, y'all. But this is a pretty good episode, and speaking of fulfilling requests, it's got a male player.

Also speaking of fulfilling requests... yeah, Episode 519. This wasn't just requested, it was demanded. I was totally bullied into publishing this one. But that might not be a bad thing.... 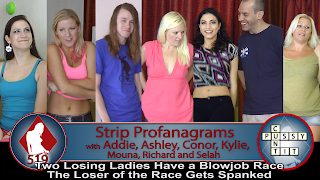 Finally, a new ILAMC promo. Well, it's not exactly "new" since the girl has already done an IlAMC promo, quite recently. But she's in a new setting. And I for one don't mind seeing her trying to cover her nude body. Next week there will be an ILAMC promo of a girl you haven't seen before... unless you're a fan of the POVs.

Despite what you say about it, Episode 519 looks awesome!! (but anything with both Ashley and Mouna is bound to be awesome). Thank you so much for releasing it Red!! Didn't you say a while ago that there was another game that they played?

Again i will remember you about the best game in my mind. You have 3 pairs, with one girl and one guy. The guys start in just boxer, and hold up a triangle off ribs. The Girls start with 4 items.

The Girls play the game. maybe rock-paper-scissor or high card, a Quick game. First 4 losses means one item, after that, the guys boxer, and after that its Earth and fire with the guy.

would like to see Pearle stark naked in lostbets clips or lostbets pov. Thanks

Saw the article about you on a certain humor website. You're famous! Love the work you do, keep it up. Favorite clip was the couple vs. couple hardcore; hope to see more like that in the future.

Yesenia!... yeah, i like her and hope to see more. she's a hottie. As for Trace... deep voice, beard and big cock is good, but you need some attitude, too. (see Dante).

Any news on the PoV interactives
Still dreaming of the start :D

And as for the povs any chance of A and Bs or they not doing well enough?

i have noticed a few words between Trace and Helena on Twitter after his humiliating cock gagged defeat in episode 511. im sure you can find a way of settling this rivalry...

winner dominates the losers already sensitive body however they want.

Trace/Helena are you up for the challenge???

Kinda odd request or suggestion: Ever think about bringing back some of the old basic games you had early on like Bizz Buzz, or Screw Your Neighbor?

I think there's something strange with last POV (117b) ; i think a part is missing cause there's a "we're down to two and two" then she lost an article and then it's "we're both in underwears" so by my count, there some loosing game lost in the editing process.

That being said, nice POV.
Any news about POV's to come? (anything with Julie?)

If I can make a request: I'd love to see Kymberly Jane involved again with LostBets. Any chance on that?

I really think that following and commenting on this blog has become pointless. Between lack of replies, lack of posts, and even not posting clips on time, LostBets has almost become LostCause.

It just doesn't seem to be happening like that anymore. The clips have become glitzy and look overproduced. The models are almost all pros. What was once was amateurs and looked like something that could happen in my own home, now it just looks like something mainstream.

Red is what kept me coming back, spending my money. Now he's not here anymore and doesn't really seem to care anymore. I read his post on that humor website. He mentioned this was his only business now. Not much of a way to run it.

I think I speak for everyone when I say, good riddance!

You mean to tell me there are other sites on the Internet where you have an open line of communication to the creators and they accept your feedback and requests? If there are, you be sure to let us all know.

Truth is that this site has grown quite a bit over the years and as a result the interactions has tapered. That doesn't mean it has stopped though. i think what red has done is commendable and even what we get now is light years ahead of what you get anywhere else.

Take your whining somewhere else man. Maybe he doesn't respond because people like you are clogging up the comments with dumb posts like that.

Thank you red for everything!

What happened to the B side games that were with Lily Mary and Stacey and the other one with Derrik and Betty Joe?

We followers of Lost Bets do not know what is going on behind the scenes. There are many reasons Red could be absent. Issues in life are never fun to share with an audience and Red has allowed us to know of broken relationship, health and other behind the scenes news. I try to never judge until I have walked in the other person's shoes.

I agree with the sentiment of wanting more amateur content. I am more interested in that content but also realize that I am in a minority who want to see more hardcore content. Hardcore content = less amateur content. Maybe if those of us who like that type of content were to do more than comment and actually buy that type of content Red would have more reason to produce it. And maybe all fans of amateur content are buying and we are in a minority. I went to the subscription site because I could not afford all the clips I want. But it seems that the content I desire is not in high demand there. I see fewer of the amateur videos there than I would like.

Something that Red could address is a place to see an index of models. Clips4Sale had this feature at one time but I cannot find it now. I believe Red had another site that had an index but I lost it when my computer crashed a while back.

I only wish the best for Red, Johnny and all the marvelous models who share their games and charms with us.

not sure why im bothering i dont think your reading the comments,

that last comment was more pissy than intended. sorry

It looks to me that B56 strip group has yet to be released. Hope this may help.

maybe Red just needs a break from all the mindless questions and comments from some peeps who are always requesting their personal fetish/fantasy be played out?

the main purpose of him interacting with his customers is to make Lost Bets better all around for as many people as possible/profitable... not cater to one pervert's one-in-a-million fantasy quest.


"the main purpose of him interacting with his customers is to make Lost Bets better all around for as many people as possible/profitable... not cater to one pervert's one-in-a-million fantasy quest."