Yup, I'm behind on blog replies, blog posts, and email responses. It's the trifecta. Hoping to catch up soon.

Episode 531 today, featuring Anneliese, Desiree, Cierra, and Kasady (who's one of my favorites. She's just so darned cute.) They play a game of Screw Your Neighbor for a hot oral forfeit, while Jay looks on.

Looking ahead to next week's Episode 532, it's another game of Screw Your Neighbor 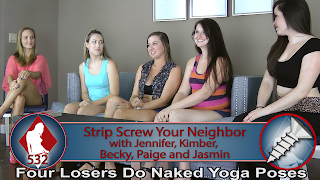 These girls were a bit shy and wouldn't risk anything too sexual. That's okay. They're cute enough that getting to see their naked bodies is a reward in itself. And I'm happy to bring back Paige, whom a few of you have asked for. Enjoy.

That brings us to Episode 533, with a new (and exciting) game. 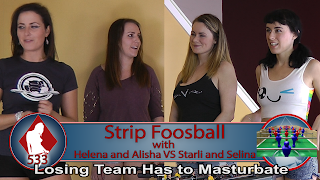 It's a team game of Strip Foosball, as Helena and Alisha take on Starli and Selina. This was our first game of Strip Foosball but it definitely won't be our last. Foosball was used in some old-school stripping game videos, and after using it myself I can see why. It's exciting. We kick things up a notch with the newbies, making the losing team spread open and rub one out. 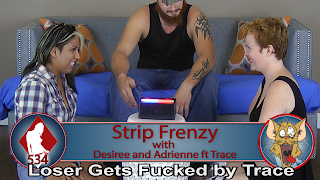 It's a game of Frenzy, our button-masher, between Desiree and Adrienne. Trace watches and prepares to use the loser as he sees fit. And boy, does he see fit.

Finally, a bit more about the shoots we did a couple of weeks ago. We actually shot a couple of holiday-themed games, which I kind of liked and will have to do more of. One will be published on December 23, just a short while before a certain very special holiday. (I want to keep publishing on Friday, so I couldn't do it on the date of the holiday itself. The other will be published on January 20 (which fortunately is a Friday), as a bit of a callback to an episode I published eight years ago as Episode 071. Yikes, was that a long time ago.

And here's a promo from one of those shoots. We've seen her before, and some of you are really eager to see her again. Join me in welcoming back Nettle.

the new girls look perfect, hopefully they were willing to risk a messy forfeit. i think its the perfect one for tight limits.

I could take or leave the messy forfeit s... But I really enjoy the showers afterward.

hey red, glad Nettle is coming back, she was one of my favorite new girls.

Also, I have a few suggestions for the POV scenarios:

First one may be hard to do, but perhaps a game show or reality TV segment would be possible, where the player is a contestant and as part of continuing the game/show, he has to put himself on the line, the host may try to put him on the spot by suggesting a forfeit.

The other one is a scenario where you are the landlord to the girl you will be playing against; she hasn't paid her rent in two months, and you have to collect it or she will have to get kicked out, she offers you a chance to see her naked if you forgive her rent.

Hey Red, looking forward to seeing the new POV's,
even thought I am not that big of a fan of the ENF clips, I prefer the clips where the player (camera) loses.
Even so, I might have some ideas for new clips.

In the office, you talk to your boss (female) to get a salary increase, since she refuses, you suggest a strip game, if you win you get your increase, if you lose you work one week naked in the office.

Your neighbor doing Yoga in the garden, since she look pretty good you suggest she should do it naked. It leads to a strip game, where the loser has to do naked Yoga, while the winner watches.

The player could be a football player, or someone else, who challenges a cheerleader (would be nice with cheerleader costume) to a strip game. If she loses, she has to cheer/dance for you naked; if you lose she could take naked pics of you, or you have to streak at a football game.

Two teachers argue about, whose class is better. In order to humiliate the other, they play a strip game, loser has to give a naked lesson.

Your girlfriend wants to get revenge for breaking up with her, so she suggests a strip game, loser has to
- pose naked, while the winner takes pictures
- dance naked (infront of your/her friends)
- do a naked snow angel (if there is snow)
- do naked Jumping Jacks (infront of your/her friends)
- use/do hula hoop
- run one round naked around the house (winner could lock the door)

If you are playing with your girlfriend the forfeit could be
- ordering something and open the door naked
- naked cleaning, cooking (she might could make a sexy dessert out of her)
- some forfeits from above

In what episode are sassy and leilani reappearing?

Is b-sides going to be updated?

Hey Red, I know it's been a long time but is there any chance of getting Salem back to play a few games? I've just rewatched some of her old videos and she is absolutely gorgeous!

Did you miss POV this week after posting an old B-side last week? Really?

Is there any chance we'll see LunaVera in POVs again? Love her, would definitely buy anything with her in it.

I'm also for the possibility of the girl winning without a multiple option for videos, it was done a few times, and I would certainly like to see it happen more often.

Is it me or was the wrong episode posted today? Where is 534?