So I accidentally skipped Episode 534. Whoops! The problem will be fixed today. Trace gets to enjoy the loser (I swear, these guys should be paying me) as Adrienne and Desiree face off.

I've gotten well behind in publishing promos for upcoming episodes, so time to fix that. First, we've got next week's Episode 538. 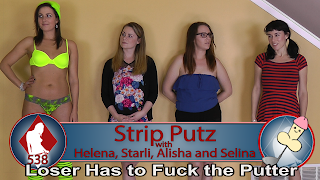 The quarted of Helena, Starli, Alisha, and Selina play a new game, Strip Putz. The game is played with a putter (get it?) and the loser of the game has to get intimate with the putter. I don't think any of these girls has had sex with a golf club before, so one of them can cross that one off her bucket list.


And then the week after that: 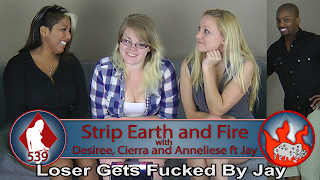 
More promos next week. In the meantime, meet Dylan.

Holy hell, was she a wild child. For an amateur who'd never been naked on camera before, she sure jumped in wholeheartedly. She was enthusiastic, I'll say that for her. We'll see her for the first time somewhere in the 540s, but it won't be the last time, I promise you that.

Looks from the convo on the last post as though you've done "Strip Bender" in the past, but not since 2010. I'd vote for bringing it back. :)

any public forfeits in the near future like we see and loved it in ep. 332 (catherine, kymberly and caroline)?

that Strip Bender episode is still one of my favorites. if you havent bought it, you should.

Are there any answers coming to our questions and replies?

maybe he's just tired of being spammed with the same annoying questions and requests?

I would be if I were Red

Hi Red,
Will we get to see Selina & Starli risking more?
Furrychris