Episode 538 today, featuring the foursome of Helena, Starli, Alisha, and Selena playing the new game of Strip Putz. Someone's going to get fucked with the putter.

Speaking of 538, that's also the number of electoral votes in American presidential elections. Yes, through careful planning and meticulous attention to detail, I arranged things so number 538 would come up on the Friday closest to the ... oh, never mind, I'm lying. This is a total coincidence. But I hope that everyone who's eligible votes, or has already voted. And, look, nobody comes here for politics and I'm not going to get into that, but I just gotta say: this is the worst election I've ever seen, and I've seen a few. Ugh. I'll be so glad when it's over.

On to happier things. Here's what we've got coming in Episode 540. 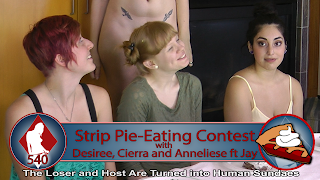 Ignore the bit about Desiree, Cierra, Anneliese, and Jay, this is just a glitch in the titles. Instead, we have Aurora, Julie, and Catalina having a pie-eating contest. We haven't done one of those since Episode 108, and that was part of You Bet Your Ass. There was that cupcake-eating contest in Episode 444, but before that, you have to go all the way back to Episode 056.  By the way, Georgia was allergic to some of the ingredients in the pie, so instead of participating I made her be the naked referee. 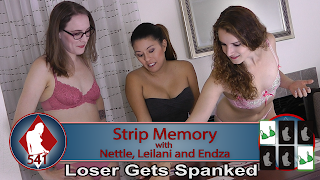 Nettle and Leilani, two girls I've been asked to see more of, break in new girl Endza with a game of Strip Memory. I usually like to welcome new girls with a simple game and a simple forfeit, but lately they've all been Strip Rock-Paper-Scissors for yoga poses. Nothing wrong with that, but it'd gotten a bit repetitive. This time I had them play Strip Memory, with the loser spanked by the other two.


Speaking of Endza, here she is. I hope you like her.

I'm astonished that it's pure coincidence that you got to 538 this week. I suppose humans can see patterns in all sorts of randomness. If it were episode 270, we'd be equally astounded.

I've been away for a while but I'm back and catching up. Watched 532, excellent episode! Great game with fresh girls. Becky is a star, no enf for her, she was peacocking on the couch, instead of covering up. Would love to see the overhead cam shot starting at the 15:32 mark. When will we see her again?

Keep up the amazing work.

No POV update yet?

What has Jay thrown in?
That guy is a human jackhammer. Impressive!

Red, forgive me if you've answered this before ...
Any chance we will see Trinity back?
Jack Casper

Red, can we get Kym back for another tickle bet? She is soo hot and yet to lose on of them