When do you get a double, but end up well past second base?

The title is a riddle. Good luck with it. If you can't figure it out, check out Episode 580, published today. But first, I want to talk about Episode P156, which was the subject of a blog post earlier this week. It was published on Wednesday, and the reviews are in:


So run, don't walk, to the LostBets POV store and buy a copy of Episode P156. You'll be glad you did.

Now, about 580. Avi is back, after making her first appearance just a few weeks ago. There's a story behind why she's back so soon which I'll tell one day, but for now, it had something to do with everybody's favorite cock-with-a-wisecracking-person-attached, Dante. Also appearing is Dante's friend Thomas, making his first appearance on camera and it shows. And also making their first appearances on video, tall and voluptuous Lydia and  petite but also voluptuous Cass.

Ordinarily, I start newbies off with relatively tame forfeits to ease them in, but this was an exception. See, these three girls had agreed to risk something rather extreme, but some were more reluctant about it than others and I wanted to do it before they changed their mind. People who like their forfeits hardcore, especially hardcore involving butts, will appreciate this. 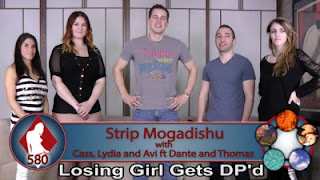 Love the new content, especially the latest POV (this week).
Would also like to see more B-Sides once again,
since these were promised to resume at the start of this year.

One of my favourite players, has been Jelly with her hairy bush.
I would love to see her risking her bush in a special "You bet your Bush" game.
Although I know she would never be game enough to risk such a forfeit.

Some "I lost all my clothes..." promos would be good to see again, especially with some new players revealed.

Strip Prick Prick Bang with Bex, Piper, Zahara, and Sheri
Forfeit – 2 losers ride the sybian
Reality – Bex and Piper lose
Alternate Reality – Zahara and Sheri lose
-I love Piper and I enjoyed watching Bex (now Tobi) getting turned on by the sybian. However, I think it would have been amazing to see the two other more innocent girls (Zahara and Sheri) riding the sybian to see what it would have done to them.

There's many other games as well that I wish had of had a different result. Anyone else have any games they remember that they wish had an alternate ending?

Thanks a ton for the anal/DP action in the new update, Red! Downloading it now.

Wow the latest episode looks great, Red. Didn't expect to see another DP again. I was wondering though, did you ever shoot any more scenes with Zahara?

@Anon 9:38 (please sign your posts): Very glad you like the new stuff. As foir the B-Sides, they'll be coming eventually, but I've given up making promises about them. They'll get here, but I don't know when. As for the ILAMC promos, those will definitely be coming, and sooner. I've got a bunch of them awaiting editing and publication.

The chances of talking Jelly into risking her bush are, unfortunately, basically nil. You probably recall that in Episode 401, she opted to shave her head rather than her bush. To me, that's a strong sign that she's very attached to her bush (figuratively as well as literally) and won't easily be talked into risking it.

@The Pin: Yeah, there are quite a few episodes that I wished had come out differently than they did (Bare-Rack's Last Day is a great example) but as I've saud before, that's a price to be paid forf candid, unscripted games. Usually I just let the chips fall where they may, and most of the time the universe rewards my faith in it by giving me something awesome, but there are a few stinkers in the midst.

Thanks for sharing your (partial list) of disappointments. Knowing what people like to see can help me make better videos, even when they're unscripted.

@Napebaf and @Bammy: I love hearing about it when people see an episode and like it, but hearing people say that they really like the idea of an episode and are really looking forward to it makes me nervous. High expectations are hard to meet. Did 580 live up to what you were hoping to see?

Hey Red! Glad to see you back!

Hey @GWKS! Glad to be back. Hopefully for awhile this time.

Hey Red, we are glad to have you back. As always, love your work and appreciate your commitment to variety (even when some of it doesn't match my taste ... i.e. not a big fan of having guys in the games).
Any chance of seeing Trinity back anytime soon? It's always a shame when you have someone win and win and win ... even when the wins are very well deserved.
Jack Casper

Monkey, I´m not a robot

@Jack Casper: Thanks, it's good to be back. Trinity was insanely cute and insanely awesome, but also insanely competiive and insanely good at the games. In the three games she played, she lost none, didn't even show her pussy in any of them, and only showed her breasts in one of them. And unfortunately there's a reason we've probably seen the last of her, which I'll explain in my next blog post. Fortunately, if you just want to see her naked (and who wouldn't?) you can do so by watching Episode 106.

@Monkeey: Good news/bad news situation there. I have three unpublished games on film featuring Tyler. That's the good news. The bad news is that I think one of them wasn't very good, and another was downright bad. I'll review the footage to see if they're as bad as I think or if they're usable, but the third one ain't bad, and I added it to the scedule as Episode 589, to be published on October 20. It's a wet-and-messy forfeit, with two losers covered in delicious goo. I hope it's worth the wait.

Red, my friend, if Tyler is playing it is impossible that be bad !!!!

Another option is invite me to meet her in a future, when you film another game with her. Because you are going to record more with her,Right?����

Don't worry, Red, it was quite good! And next time I'm excited, I'll wait till after I've watched to let you know, so I don't make you needlessly nervous.

Nice to see a new POV one! A bit of a shame that it isn't an actual interactable game, but I guess that isn't really something that comes up to often huh?

Hey Red,
Is Dylan coming back soon too? I really liked her and I hope she participate in some forfeit soon!