Today in Episode 588, Tobi is back with Sassy and Dylan, and most importantly, Tyler. A lot of people have been rightly clamoring to see more of her, and I doubt they'll be disappointed. Fans of wet and messy will also be pleased, as will people who like high-energy, excitable girls. In fact, fuck it. Everybody's going to like it. Well, probably.

So I mentioned a couple of shoots I did last week, with Dylan, Carmen, and newbie Nancy on the first day, and Dylan, Sassy, and newbie Geneva the next. On that first day, I had two losers do the One-Finger Selfie Challenge. If you're not familiar with it, you owe it to yourself to Google it. The girls hadn't heard of it either, so they were taken by surprise when they saw what it was. But rather than seeing it as a penalty, they all thought it looked fun, so they all did it. The next day, Dylan told the other two about it, and they were all gung-ho to give it a try. So here's Sassy, doing her best to cover her goodies with just one finger. (She's not entirely successful, as her left areola peeks out.) Enjoy, and feel free to spread far and wide. 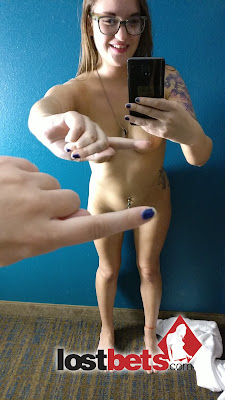 I'm a few weeks late with this, but I just wanted to say thanks for the re-inclusion of male players. Also, if you're open to forfeit suggestions, I'd love to see a game where the male contestants run the risk of being subject to post orgasm torment. That'd be a must-purchase for me. :)

does Dylan have anything else online?

Thought of a forfeit I'd like to see: looser is tied to the bed and blindfolded. Then someone (unknown to her) comes in and has sex with her, then leaves. The idea being that she doesn't even know who she had sex with (until she sees the video, at least).

Also appealing but less hardcore: her being groped, or even just being viewed naked. Not knowing who has touched her, or even just who has stared at her naked.

i like Sam's idea, and have thought about bringing it forward myself. of course, i dont expect a real stranger, but maybe one of three or four pre-chosen guys, she just doesnt know which one until after.

I have to say, your videos really feature a LOT of Tobi. And I have to say, I find her short hair and tattoos to be a real turnoff.

For the most part, I think all women are beautiful and it's wrong to criticize anyone's appearance, but I also can't help what I find attractive or unattractive, and unlike most aspects of your appearance, hairstyle and tattoos are things you have total control over.

I also can't help but notice that Tobi acts super-mega-embarrassed every time and keeps coming back again and again, every time just as embarrassed as the last, even for some scripted material like the retrospective. This makes her seem really fake. I admit that I do like to see some embarrassment, but it's much more important to me to see real women rather than fictional characters.

Signed,
The Guy Who Signed This

As always I will reiterate my love of the mini forfeits. Realized how fun the games with the wheel are along with my wish for mini forfeits in memory with the cards. Integrating some wet and messy into the mini forfeits could work well too. I realized I love they games where some players get to choose others to strip so keep those coming.

As a big fan of the wet and messy, I love the pie game episode. One sad part is the lack of power of the machine in that game. I love the randomness mess. You could always have a player who chooses not to participate or a guy spin a wheel (maybe a twister wheel) while they all face the other direction and pie or mess the loser showing them they need to strip. This is a way to do the same game but not worry about the toy not having much power.

Finally thank you for your responses to comments you certainly make it fun to give feedback and hear about whats upcoming.

Absolutely great. No words. I wait a long long time to see this.

Tyler, simply the best. She has to return

I have a question about one of the POV vids. I usually only go for the 'normal' vids, but I recently decided to take a look through them to see what's there. I noticed strip high card with Natalia where the loser has to wear nipple clamps (P059).

SPOILER ALERT:
Can anyone tell me how long she wears the clamps for and how intense it is? If it's just her wearing decorative clamps for a few seconds, I'm not interested. But if it's pretty intense, I'd definitely buy the clip.

Hi red your site is The coolest eva! If you could pretty please realease the b side with anastasia/fern/erica or the one outdoors one with jelly i'll be your best friend 4eva!

@Jay: You're very welcome for re-including male players. I've been needing to recruit more men, and to use them more as players rather than just the forfeits. As for post-orgasm torment, that's a new one on me. Could you please point me to a few good example videos so I know what I'm shooting for?

I'm always open to new forfeit ideas, by the way. And if you remind me, I'll give you a free copy of the first time I use it.

@Anon 7:18 (please sign your posts): Not that I know of. I believe she'd never done anything like this before until Tobi (bless her) recruited her. I'll ask, but I don't think so.

@Sam: I like it! I've done stuff with blindfolds before, but always pretty much everyone got a hand in there so the loser knew that she'd been the subject of everyone's attention. Maybe I'll bring in a mystery guest after the blindfold goes on.

@shredder: Who says not a real stranger? Well, okay, maybe not... but perhaps one of her male friends that she didn't know would be there. Might be tricky to pull off, but I'll try it.

@TGWST: You're defunutely right that Tobi has been overused lately. I know it, and so does she. She's been in more episodes than most mainly for two reasons: first, she bringts in a lot of some of our best recruits, many of whom are much more comfortable if she's doing it with them, at least the first time. And also, she's been a lifesaver multiple times by filling in for a no-show. We wouldn't have been able to shoot Stefanie without her, for example, and I think that series turned out great.

Of course you don't have to apologize that her appearance isn't to your liking. There's no accounting for taste. And since I try to shoot as much variety as possible, if you happened to like all of the players, either I'm doing something wrong or you have extremely broad tastes. Hopefully you'll find plenty here without Tobi, and again, she'll be appearing less frequently going forward. Thanks for the input!

@Blue: Another big advantage of the "winner picks who strips" rule is that the girls tend to be way too "fair" and try to equalize the clothing loss rather than ganging up on one girl and ending the game quickly. Usually means more nudity.

We've been talking about ways to improve the pie game, such as replacing the springs with much stronger ones. Or making our own game that would release a spring-loaded syringe full of goop. They're on our list of things to engineer.

And finally, I've said this before but: of course I pay attention to your comments. Why wouldn't I? You guys are the ones who make it possible for me to do this, and you've given me so much. Even if I didn't enjoy connecting with the fans (which I do), it's entirely in my self-interest to keep you happy and listen to your thoughs. I'm very glad you appreciate my engagement, but there's no need to thank me for doing what I want to do anyway.

@Monkey: Believe me, I will try.

@Anon 2:51 (please sign your posts): She wears the nipple rings for about two minutes. They're not just decorative and clearly hurt when she puts them on and while she's wearing them. If you decide to give it a try, let me know what you think. And thanks.

@lost bets lova: Thanks very much. And thanks for reminding me of those unpublished episodes. Since the B-Sides (and POVs) are on hold for now, I added the one with Fern, Jelly, Serengeli, and Jerome to the queue as Episode 594. But when they did the outdoor exercise, they were wearing microkinis rather than being naked. I think the neighbors were in their lawn. Hope you like it anyway.

Re: Post Orgasm Torture, here's one with a familiar face...

Hi, I buy almost all the wet & messy forfeit videos. I much prefer the messy forfeits with substance poured on head and hair, you had a good run of these a few years back. Hair pulled back mess on nude body like this clip is ok, but total coverage including hair makes a clip a must-buy. Shower footage afterwarods is awesome, thank you for that in nearly every messy forfeit. Hope for some more total coverage messy videos. Or how about combine messy with sexual forfeit, such as in this team game the losers get messed then climax with toys or go down on each other. Thank you!

To the anonymous poster from 10/28/2017 at 10:02 AM: Yup, that's a great example of the post-orgasm torture I'd love to see: The guy gets tied up, his legs are spread open, his cock is grasped tightly, and his head gets rubbed till he screams. So hot.

Sorry, that last post is from me, the original requester of the POT forfeit, Jay. Also, if you don't mind perusing some gay videos to get an idea of how post orgasm torment works, Men on Edge and Slow Teasing Handjobs are great sites.