I've never actually run the numbers, but I'm sure that the vast majority of LostBets.com episodes feature two or three players. There are a few games with four players, and a five-player game of Strip Screw-Your-Neighbor was, up until now, a record.

Coming soon. FYI Saturday's festivities began with me waking up at 4:30. It's now about 22 hours later and I still haven't gotten to sleep, but I just had to show this off. Spoiler: it was awesome. This nine-player game was just part of a very exciting day.

UPDATE 2: Here's a still of yet another girl I saw yesterday. Do you recognize her? She's wearing her hair a little differently, and also her tits. 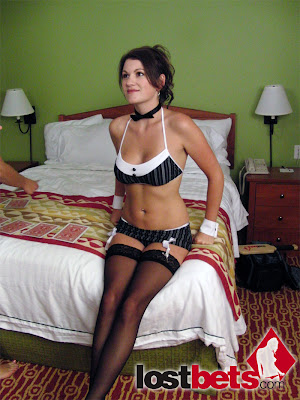 wow. should be interesting to say the least.
also, Kala. did she play? if so awesome.

I've got a question about Julie playing screw your neighbour. Previously she was fairly shy about the forfeits, and this one is show pink, actually show pink in front of alot of people let alone the camera. Is Julie's shyness disappearing?

ps: PLEASE don't tell me that Kala is there in that naughty cuffs and bowtie outfit just to serve drinks!

E-Male: Yes, Kala did play... against another lostbets.com veteran, who had noticeably lost weight and gained some prominent tan lines. And indeed, it was awesome.

Gordon: First things first, that outfit was Kala's chosen costume for the game of Strip Barracuda. Don't go looking online for the rules; I made it up myself. Needs some tweaks but I think it has potential.

Next, about Julie, an excellent question with a somewhat complicated answer. The short answser is: no, Julie is still very shy, and still not at all happy about deep exposure to the camera. The long answer is that I kind of sprung this one on her by surprise, although not on purpose. The original plans for this shoot were very, very different. Certain complications compelled those plans to be abandoned at the last minute, and we were left scrambling to find a contingency plan. I swapped text messages with Julie as she was on the road for the long drive (for both of us) to the location, assuring her that we would find a venue and she was not making the trip for nothing. When she arrived, and saw seven other people already there, the first thing she said to me is, "Red? What have you gotten me into?"

When she heard what the forfeit was, she set limits. She insisted that if she lost, absolutely positively nobody was to touch her in any way, and if they wanted her to change her pose, they had to ask.

And... she kinda sorta owed me risking a spread. See, in an as-yet unpublished game with Sammy, she agreed to risk a certain extreme forfeit... but she demanded that of she lost I leave the room while the forfeit was performed. Prudella would have the only handheld camera in the room, I'd sit up in the loft and wait until I heard... well, never you mind just yet. The point is, while Prudie's handheld footage is great, the camera I would have been operating was in entirely the wrong position. I teased her about that, telling her that I appreciated her willingness to flex her limits, but I just wasn't going to leave the room next time. I told her there'd be a spreading forfeit and said that if she lost I would personally carry a handheld cam right up her crotch. (She blushed. I love that girl.) Didn't tell her it'd be in front of a crowd, but what the hell... it gave her more impetus to want to win. Did she? Well, that would be telling.

It is great to see Kala again; she is one of the best of your girls. I hope she continues her sequence of losses so that we can see her body again.

Mismanager: It'd constitute a spoiler to tell you whether or not Kala lost any of the five one-on-one games she played on Saturday... I'm afraid you'll just have to wait.

And as I alluded to in the blog post, her body is not the same body it was when last we saw it. Personally, I'm kind of saddened (I liked her tits the way they were) but her new rack does have an undeniable charm. Er, if I saw it, which of course would only be the case if she lost her bra in a game, which I can neither confirm nor deny.

What happened to the new husband who didn't want her to do this kind of work? When you wrote about that I thought we'd seen the last of this beauty.

Mismanager: Yikes, I didn't remember that I'd told you guys that. I probably shouldn't have... that's personal and private between Kala and her guy. In any case, it's no longer an issue. Maybe the guy relented, maybe they're no longer together, maybe Kala decided that she would do it whether he approved or not... it's not really any of our business.

Just curious, are there any plans for a return of Faith, Brigid, and Arwen? In an e-mail last March or so you said there'd be a good chance of them being featured this summer, and I'd really like to see Arwen get her comeuppance.

Hi Red
I love the sexy forfeit between Mary and Amber, in the last two episodes, and most off all, i like the way, they teases hiother. Any chance too se them more?
And what about, a forfeit with forced licking? Couldent you find two, ore three who dared that, i was thinking Lilly, Adriana and Amber, maybe dared thet!

Grey: And I'm looking forward to bringing it to you. Soon, I hope.

Jim: Did I say that? I don't have any more footage of them, and they're not local... I am going to try to get them back but no telling when that'll be.

Anon: Thanks! (But please sign your posts!) We'll definitely see more of Mary and Amber. And there will be some tickling forfeits in the not-too-distant future, stay tuned.

Whoops, you're correct. I re-read the e-mail and you only said you might be traveling near where they live this summer. Ah well, would be great to have them back.

Red--what happened to the strip pool featuring Julie? I see the beginning of this video here, but nothing on the clips site. Am I missing it?

Anon (please sign your posts): that video will be published today at 7:20 PM Eastern (GMT-5) time. Hope you like it!

hi there ppl. I'm actually into shoes and I was searching for that meticulous make. The prices due to the fact that the velcros are all over 340 pounds everwhere. But definitively I bring about this locate selling them for half price. I absolutely love these [url=http://www.shoesempire.com]prada sneakers[/url]. I will absolutely purchase those. what can you tell me about these?