Return of the lawnmower engine

The Sybian makes a return appearance today as Paige and Madison square off in a game of Strip Memory, with the loser taking a ride.

I've already talked about Episode 352, with Erica returning along with Liilii and Mo, neither of whom we've seen lately. Losers do some revealing naked calisthenics. 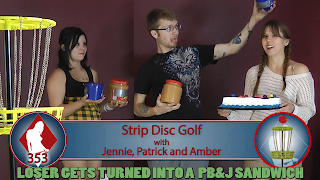 It's wet and messy time in Episode 353, featuring Amber and Jennie returning, along with Patrick, who joins them in a game of Disc Golf. The loser is turned into a human PB&J as she's smeared with warehouse-store-sized containers of peanut butter and jelly. There's also birthday cake involved: this game was played on my birthday and I wanted a cake, dammit. 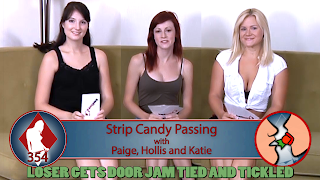 Paige, Hollis, and Katie are back in Episode 354. It's Candy Passing again, and a fearsome doorjamb tickling is in store for the loser. 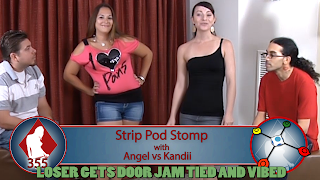 Angel and Kandii are back in Episode 355, this time taking their fates into their own hands rather than trusting their boyfriends. The boyfriends aren't left out entirely, though: once the loser is strapped into the doorjamb cuffs, both the winner and her boyfriend are armed with massagers and they both get to go nuts on the loser's helpless body. 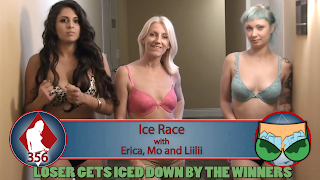 Then it's back to Erica, Mo, and Liilii for Episode 356, doing an ice race, each girl trying to carry as much ice as she can in just her bra and panties. The loser is stripped and covered in the ice collected by the winners. Brrrr.

That's all I'll say for now, although I promise there will be something of appropriate magnitude for Episode 357. Let's just say it'll go off with a bang. Enjoy!

Took a little calendar check to find out why 357 needed a bang.

Yikes! I wasn't sure what you meant until I did my own calendar check and realized that at a rate of one update per week, 357 will be published on the closest Friday to September 11. That certainly isn't what I had in mind, I was just thinking of .357 as being a caliber of firearm. Now I'm kind of uncomfortable and thinking that publishing 357 on that date would be in pretty bad taste. Fortunately, there will probably be at least one double-update weekend between now and then.

oh! I saw it as a Friday the 13th reference.

good to see Erica back, will she be doing any harder forfeits?

Hehe, i told you you should consider buying a Sybian.
Glad it features in so many great vids.

@mastachef: No hardcore with Erica likely in the future. The one time she might have done it, she won, and now her limits have tightened. Believe me, I'm just as sorry as you are.

Can you link me to the promo you mention? It sounds like part of YBYA, which may yet see the light of day.

@AV: The Sybian has definitely produced some great memories, no question about that. Now, I'm thinking I should get a second one. That way, we could have races.

Red,
you gave the game away for the PBJ game by saying "she"!
Furrychris

Red,
I just realised how you can make the sybian a forfeit. The girl has to stay on for a set period of time no matter how many times she comes. Obviously some common sense has to be used with this.
Furrychris

I find the suggestion by Furrychris above to be a good idea. It is a little daft to have a "punishment" which end with the loser being pleased, no matter how embarrassing it is. For a punishment it should be orgasm denial or orgasm overload. Overload would be more entertaining to watch and more embarassing for the loser, as loss of control often is.

Two suggestions for (related) forfeits I'd like to see:

1) You have had games where the loser is given to an observing man for full-on sex. I'd like to see a game where all players are straight women, and the loser is given to an observing lesbian for full-on sex. I don't know whether "sex" is well enough defined here to make this work. But I like the idea of someone with no experience with women being put in the situation where she is going to have to both pleasure and be pleasured by another women.

2) A game of straight women, where two losers have to have to have (or act out) full-on sex under the direction of a third party. The third person (winner or observer) works them through it -- telling them what to do to each other. ("Unbutton her shirt", "kiss her...", "lick her...") If you are truly dealing with straight women, I have no idea if it would be reasonable to expect them to climax. But even making them fake it on command seems like it could be really embarrassing (and hot). I don't know how many of your models act well -- but for this, who cares? Not really the point.

Of course, I don't know how you talk women into doing this. What would make it hot would be the fact that the straight woman/women is really apprehensive about sex with a woman -- making the recruitment a challenge. But I have no idea how you talk them into anything you do.

Red,
Sorry to bother you with issues for the subscription site but you have always seemed to help fix things with that site in the past. I have noticed recently that some of the episodes that use to be up on the site are no longer there. I thought some were starting to go missing but I never could quite remember what was suppose to be there. Now however I do know that the team champion episode was up on that site but now I can not seem to find it. While I don't believe this is the only one, it is the only one I can specifically name. Not sure what is going on over there.

We need some spanking forfeits

I'll heartily second raj_24801's motion for more ass-warmings! And if at all possible, bring in some folk who aren't afraid to apply the paddles, like the guys way back in clip 101 that did such a fantastic job of lighting up Candle's backside. If there's another spanking as thorough anywhere among the clips for sale, I haven't found it yet.

Just throwing it out there that I too am curious about seeing the missing parts from YBYA of which we saw brief parts of throughout the version that was actually published.

I agree that the girl on the sybian should be tied with handcuffs behind her back and have legs restraints so she can't move to much. I would like to see a blindfold added to that too.
Then the winner can grope her and tease her body with a feather(duster), ice cubes and use the massager all over the rest of her body.

I'd be against a blindfold for the woman on the sybian because I love seeing her facial expressions.

This was another great game, Red, even if they weren't the best Memory players. They're already pretty high on my list of favorite players.

And let me say thanks again for the free clip you sent me. Earth & Fire is an amazing game.

I have a fun idea for a forfeit. any 1v1 or 1v1v1 game and loser(s) are leash & collared by the winner; forced to be doggy walked out of the hotel room in the thong & pasties or paint. and forced to worship the winners barefeet in public and tell the winner hot much they love their feet. and write feet slave and other things on the loser(s) bodies. Also, I'd like to see the participants take off shoes or socks during the game and be barefoot during the forfeit.

Red, few blog posts ago I asked if you were doing anything with Siren, Katherine or Candle in the near future. You asked me back if I had any suggestions. Turns out I do!

Get four or five girls dressed up as cowgirls (meaning boots and hats; obviously keep em naked otherwise). Rather than a strip game per se, make it a contest. Have each girl ride the Sybian like a mechanical bull. Judges will grade the girl on how long she lasts, how embarrassed she is, and the "quality" of her performance (greater enthusiasm and more dramatic reactions to the orgasm are infinitely preferable than sitting like a lump, and make the endurance challenge more fair). Three or four losers dress up in the skimpiest swimwear the laws in your state will allow and clean the winner's car. The winners should be encouraged to invite as many people for the show as possible.

I'll second the part of Faith's suggestions about a carwash forfeit.

what are the possibilities of having true, somewhat verifiable, siblings of mixed gender play against each other?
i'm assuming the forfeits would be soft in nature, but anything harder could be administered by a friend of theirs.

i think that the embarassment level, being naked and ashamed before an opposite sex sibling, would be rather interesting to see on film.

Red, any hope for us ever seeing Kendra or Natalie again? I'm sure you've been asked this before.

As we probably won't see lovely Bibi here again, does anybody know if she appeared on any other Website?

As a forfeit,can you use the sybian outside without drawing atttention from the neighbours?

The suggestion came up about washing your car in the skimpiest swimsuit the law will allow. How about the slingshot? The girls always dread wearing it, and all of the leaning, stooping, and bending will guarantee that a naturally busty looser would be constantly popping out of the suit.