I've said this before, but one of the best things about recruiting amateurs (among many good things about recruiting amateurs) is that they have amateur friends. That's certainly true of Bex and Piper, who return today in Episode 402 with their 20-year-old friends Sheri and Zahara in tow. I've teased about these two newbies for a long time, so now you can finally meet them. Hope you like 'em as much as I do.

Next week starts June Jubilee, with Episodes 403 and 404. I've already previewed these two episodes. Here's a look at the following week:

Episode 405 starts the weekend off with the return of Indigo, Blossom, and suddenly bald Jelly. They play a new game, Pirate Penguins, involving balancing penguins on a pirate ship. This is another one that didn't quite work out as expected. The  two losers are supposed to have to take a bubble bath together, including soaping each other up and scrubbing each other down, but it looks like so much fun that the winner jumps in with them. So it's not much of a penalty, but it is three cute young amateurs naked, wet, and soapy. 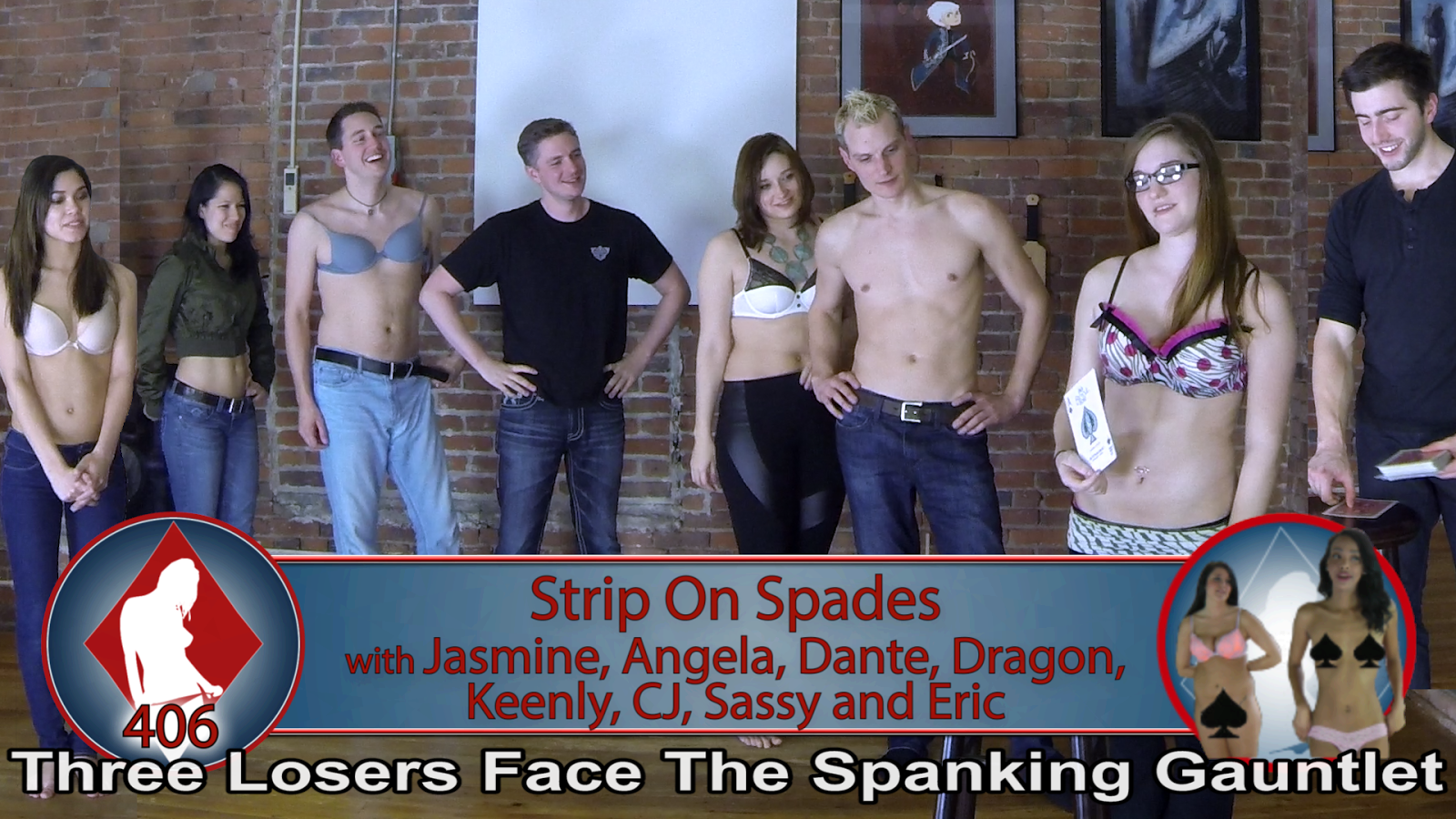 Moving on, Episode 406 reunites the players and the bangers from Episode 400 on equal footing, an eight-way free-for-all where it's every man (or woman) for himself (or hers).  The losers have to run a spanking gauntlet made of the winners, each holding a different implement. Some of the winners take their job very seriously, and it's almost more than the losers can bear.

And that's not nearly all. The week after that, we'll see some girls risking doing something they've never done before, on camera or off. Then Saturday marks the return of somebody I think a lot of people will be very, very happy to see back.
Posted by Red at 9:54 AM

I can't wait for everyone to meet my girlfriends!! I'm pretty excited to see my favorite pocket size competitor Sheri on film. Truth be told I crush on her pretty hard.

Is it just me, or are spoilers not hidden on the newest clip's description?

Not just you, Mycroft, but now it's fixed. Somehow the quote marks in the HTML tag for the spoiler style got changed to curly left-quote and right-quote characters. Go figure. Thanks for pointing it out.

I'm a big Olivia and Brooklyn fan will they be in any upcoming videos. Also thanks for the heads up(excuse the pun)on next week's vid, sorry but bald women just don't do it for me. Normally I think Jelly is pretty hot but goin to skip that one. Never cared for Sinead O'Connor either.
Grow it back fast Jelly and come back again.

I'd enjoy seeing Piper and Bex on either end of a good hardcore forfeit. Perhaps the one I mentioned earlier - loser pleasures two or more winners orally while being tickled. ;)

@ Anon 5:04am (Please sign your posts) - The May 30th video was out yesterday. It's # 402, the first video featuring Bex's friends Sheri and Zahara as well as the incomparable Bex and Piper.

@Johnny: I think the question from the Anon @ 5:04AM was in reference to the member site, which has yet to be updated this week.

any one of these ladies would look real good cuffed to a St Andrews Cross.

is it still in the works, Red?

@tienteaser I like the idea!! I had better win though because I hate being tickled :)

@CA Fan. St A Cross huh?? My interest is peaked

Hi,
You should buy panties with the lostbets logo printed on the butt. Then the playing girls should use them in future games.
Perhaps as part of a forfeit a girl has to walk in public only with these panties. To make it more interesting you could also have the panties open in the front or rear (then the logo is printed front).
Using the open panties in future games would mean we get to see a girls pussy or ass (depends on which side is open) even if she has has not lost her pants yet. You can search for panty open rear or front and you'll find some. You could also design your own pant with the scisscors. Important for me is that your logo is printed on the pants.

Great idea having pants with the logo of lostbets. I would prefer seeing open panties cause it is more embarresing for the players to wear kinky underwear. And we get to see more nude skin even if a girl does not loose.
Oilsearcher

Bex rule or Wax rule. Players should have achoice. Bex rule is great. Would like to see more shaving. Perhaps you could even talk a girl to risk getting her pubes waxed. Therefore you could change the bex rule shaving gives one article of clothing for a waxing players get two or three items of clothing back. You ask if the girl wants bex rule or wax rule.
After we only once had a waxing it would be a dream to see it again in future.

Episode 344 was great seeing Amber shaking her butt under the tickling was awesome. Only one thing would have made it even better. You should show Ambers face while she shakes her ass in one picture (picture in picture). We see her butt in big and her face small. Another possibility would mean tie the girl up lying on the bed in hogtie with her feet behind her head. So we would be able to see her tickled butt and the expressions on her face at the same time. Please more asshole tickling in the future.
Twopicsinone

@Bex, tickling is a double motivation in that scenario. Most girls would dread being tied down and tickled, so they'd work hard to win. For the loser tickling would motivate her to up her oral sex game because the tickling doesn't stop until both of the winners are satisfied.

Of course it might be tricky to focus her attention on that while she's being tickled...:)

@Bex: I'm glad you like the idea of using vibrating panties. Especcially the pierced hoids will make it more intense. Please use it in one of your next Bex videos.
Hear that Red?
VibratingPanties

Hey Red, is the POV store included in June Jubilee?

Evalina in the newest POV looks like total cuteness. Will she be in anything else soon?

Keep your pinky out like that silly formal teacup posture. It will prevent you from crushing to hard accidentally!

@Anon 9:41 (please sign your posts): I don't have anything more with Olivia and Brooklyn on film, but I definitely want both of them back and might get the chance this summer. As for Jelly and her head, I understand, and that's why I try to have a wide variety, so there's something for everyone. I saw recent pictures of Jelly and it looks like her hair is growing back nicely, but as for having her back, I'm not sure. The problem is that she has very restrictive limits, and while there's nothing wrong with that and I always respect a girl's comfort zone, I think she's pretty much done everything she's wiling to do. I don't know what other forfeits she could risk.

@Tienteaser: It may not be quite what you were hoping for, but you will get the chance to see Bex and/or Piper risking one or more hardcore forfeits. (There's also a tickle forfeit, albeit a nonsexual one, this weekend.) That's the good news. The bad news is that it won't be for many months. There's a long way to go 'til then. Enjoy the buildup.

@CA Fan: It's definitely still on my list. I found what looks like a good (and portable) one on Etsy but it was $700. That's still quite a bit less than the fucking machine I don't use anymore, so I'll buy one, but first I want Hippo to take a crack at designing something better.

@Bex: A St. Andrewe's Cross is the thing Theon Greyjoy spent the better part of Season 3 strepped to, or if you're not familiar, a big wooden X you can strap people to for tor torture and/or tickling. And as for you willing a game with a tickle forfeit, well, I don't know. Maybe I'll pick a game you're really bad at. I'm sure the fans would love to see tied up and tickled.

@Openpantlover and @Oilsearcher: I apologize if I am mistaken in this, but I believe you are the same person, as well as several other posters in this thread, and the same person who's posted dozens of times here using a different name each time. I'd really appreciate it if you would pick a single name and stick with it. I welcome your input and you've had some really good ideas, but all the different names are very distracting.

@Bexwaxer: Well, you will be seeing more shaving coming up, that's a guarantee. You're right that we haven't had a waxing in awhile, but shaving is a lot more impromptu than waxing. A girl can do it herself on a moment's notice with some simple supplies. Waxing, especially waxing of the hoo-hah region, is a little more delicate and is best done by professionals. For Episode 170, I hired a profesisonal waxer and had her on standby. I'll try to do another waxing forfeit, but I don't see it fitting into the middle of a game like a Bex Rule shaving does.

@Twopicsinone: Good idea on the picture-in-picture. There are lots of times when I wish we could show two angles at once. We've experimented with PiP before but usually it's too distracting.

@Mark: Afraid not. I thought about it, but we didn't need the extra work.

@J.W. Locke: Evalina's one of the girls that Lily Cameron found in Portland when she was shooting the POVs for me. I believe I have one more POV of her, and that's it. I should have her contact information around here, though. Maybe I'll look her up and see if she wants to play for real. She sure is a cutie, no doubt about it.

@Major lurker: Thanks for delurking, hope you stick around.

Red, the member site has a glitch. It's not playing the full video.

Red, if you're shooting hardcore this summer, don't forget to invite Mika!