Episode 469 features a girl out for revenge. The last game she was in, the game she lost and now seeks vengeance for, was a game of (mostly) luck. This time, her skill will be a factor. Will she avenge herself, or will she be humiliated again?

Here's a preview of upcoming Episode 473: 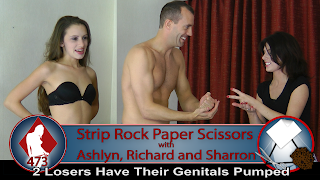 We haven't seen Ashlyn since Episode 434 but I'm very glad to have her back and I've got a feeling you will be too.

Remember the pussy pump? It's not my favorite forfeit by any means, but I still like it for a special reason: it's unique and unfamiliar. Whether a girl is a complete amateur who's never been nude on camera before or she's a hardcore fetish model who's seen it all and done it all, it's a pretty safe bet that she's never encountered one of these before. When a forfeit can make a jaded porn starlet nervous and apprehensive about who's going to happen to her, it's a good one. And for the first time with a pumping forfeit, we have a male player, with his own special pump for his own equipment. The losers of this one don't just have their babymakers inflated. The winner gets to play with them, and it ends up being quite a show.

I didn't answer blog comments during last week but I'm all caught up on the last post now, if you're one of those who's been waiting on a reply to some pretty inspired ideas, it's there. Krycek, still waiting for (and looking forward to) your review of Episode 467!
Posted by Red at 10:09 AM

What is the pov for this week?
PQ

I've long been a fan of the truth-or-dare style of games (like DareRing, but there are a million ways of doing them), where anyone may have to do anything -- and perhaps with anyone. I know it's not everyone's cup of tea, but some here have, like me, suggested that it would be fun for a co-ed game where guys might end up risking having to do things with other guys.

Anyway, one of your male players performs elsewhere under another name. (I won't say his name here to preserve the illusion of innocence for those who want it, but I suspect you can figure it out and I can email you his LostBets and other name privately if you want.) I asked him on his Tumblr account (which uses his other name) whether he'd be up for a LostBets game where he might risk "forced bi" male-male activity, and he said yes, he'd be up for that. Having seen more of his body of work (ahem), I wasn't surprised by his response.

So anyway, male-male interaction isn't high on your list, but lots of others here have asked for DareRing-type games, so maybe in that context it would be a good seller. Like I said, you can probably figure out who I'm talking about (and if not, maybe that's because you have lots of male players willing to risk it!), but if you're interested I can share his name privately if you want.

What ever happened with the last game featuring bibi and Kodak, you said it wasn't as good as the others and would b published as a b side but it never happened, regardless of the flaws I would love to c it published at full price if needs be, also any chance if getting them back for another game?

Are you still planning on posting those videos of you and kat somewhere? Or maybe you have already? Either way, let me know. Thanks.

Any update on Jasmine or Fern? I know you've said you're working on getting them back, and I think a lot of your customers would be pleased if you did. Thanks

As you have fans of both softcore and hardcore, and some often speak disapproval over a lack of films that interest them. Have you considered either doing a sc and a hc clip each week, or expanding to have 2 different sites. Lostbets and maybe lostbetsxxx or something like that to please all viewers. And you have mentioned in the past how you often have a backlog of material. And with 2 sites no one would blame you if 1 of them missed a week or 2 every once in a while

I have been out of the lost bets loop for awhile and am looking for some input from some others fans out there. What new girls (girls only added since last September) are must see? Anybody got any new favorites from the last nine months?

@Johnny... yeah, joe is not the only one who would like to see more of Kat.

I join in RS' comment. I would like to see some games in which girls vs. boys REALLY matters.

It is why I suggested the tickling/stripping game in the prior forum, where there is a set amount of time for the guys to get the girls to beg for mercy, so that the girls AND the guys have something to worry about should they lose.

And to further RS' main point regarding 'forced' male-male contact and the Darering game concept, why not get current players to agree to a Darering game? The Darering idea is free for use. Why not do another Darering?

The idea works and people want it.

I also support RS' idea, just because it would really up the ante and create stakes.

And to Pareto, couple of my favorites in the last year are Keenly and Bex/Tobi

@Joe, Shredder. Sorry to lag fellas. I've been too busy making a mess out of my romantic life to be on task in the taking care of business department. The good news is I've managed to make such a mess of things that romance is now the farthest thing from my mind and I will be redoubling my efforts to market the materials I've got. Stay tuned!

I got a pitch for you guys:

I'd love to see a game of "Bondage Strip Trivia," where our competitors are tied with their arms over their heads (or even better, legs spread in a revealing pose), and asked trivia questions. The losers would be stripped (or have their clothes cut off? cheap clothes, obvs) by a third party.

What do you think? I think that'd be hot.

I agree with the idea of a dare ring type of game. It is just so unique, and it brings a sort of "tension" and excitedness that is new and exciting.

@SP, I like your idea of a bondage/stripping game, especially if the clothes are cut off. There's such a vulnerability to being unable to resist or cover up as you are stripped. And clothing destruction is especially awesome when there's at least the illusion or fantasy that the losers aren't going to get clothing back and have to walk home naked. (I know it can't really happen, but maybe for the fantasy they can be made to leave naked through the front door, even though in reality they scuttle back inside as soon as the cameras stop rolling.)

Any chance of seeing Piper back risking some hardcore b/g action? I really liked the scene where she was fucked, but it was too short. Piper is good together with Tobi.

Hi red,
In my opinion a tattoo forfeit would be great. The loosing girl becomes a tattoo (betsy Tor exempel).
Would love to see this,special it its the girls first tattoo or it she only had a few.

i just Review episode 400. its must be your best ever. Have you any more gangbangs in the future plans? How you gonna celebrate 500?

And finally have you opportunity to get Jasmine, Olivia, Kandie and/or Mika back im be the happiest guy in nothern europé.

I am glad to read people asking for Mika return, since it is my favourite so far. Red told in the beginning of the year that he would do his best to have Mika back but as months have passed by I imagine that we are not gonna be that lucky... Having Mika in an epic episode 500 (besides a lot of episodes) would be really awesome, being even happier that SwedishGuy

@René - Sadly, no. Piper has been approached and has indicated she's done with her time at Lost Bets.

Is this blog inactive now? I'm just wondering cause there has been no posts in weeks. . .

@Bammy. I will remind Red to be more vigilant in this regard. He did make a post this morning though.