Episode 484 publishes today, featuring perennial loser Angel trying desperately to pull off her first individual win. (At least I think it's her first. I haven't gone back and checked the record, so maybe she managed to win one or two, but I don't think so. Regardless, she's still got an impressive losing record.) The stakes are high as she seeks revenge against Lance for having to suck his cock on camera back in Episode 270. It'll either be a repeat of that one, as she once again finds herself gagging on dick, or she'll finally get her comeuppance and get to taunt Lance as he kneels between her legs and gives her what she wants.

We're finally managing to build up a healthy queue of ready-to-publish videos, so I can give you previews from further out. We already showed you up to Episode 487 last week, so here's Episode 488. 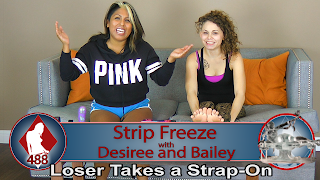 Of course, I can't really say much until Episode 485, featuring the same players, is published. Don't want to spoil that one, so I can't tell you which of them is seeking to avenge her loss in 485. But exotic Desiree and increasingly punky Bailey are back for their second game. In the first one, the loser had to masturbate in front of the winner (and, of course, the cameras.) This time, the stakes get a little more intimate and personal as the winner straps on and the loser has to take it.  Desiree is getting a real crash course in LostBets forfeits.

That takes us to November, where Dolly, Nettle and Tobi continue their competition in Episode 489. 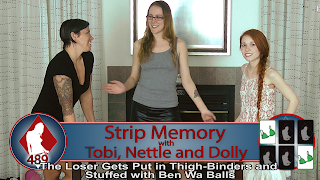 The players test their memories with something fun for the winners. The loser is restrained in the thighbinder, leaving her pussy exposed and vulnerable. The winners take advantage of the situation by inserting (and removing, and inserting again, and removing again... repeat several more times) Ben-Wa balls. None of these girls has any experience with these particular toys, and they're all curious. They experiment, trying to insert them different ways, trying different ways and speeds of removal, seeing how many balls they can stuff in her, and using a wand massager on her clit to make the balls inside rattle and vibrate. ("It's like there's a Newton's Cradle in there!" the loser exclaims.

Dolly, by the way, has extremely fair skin -- so fair. in fact, that it's still dotted with red marks from her time as a human target in Episode 483. 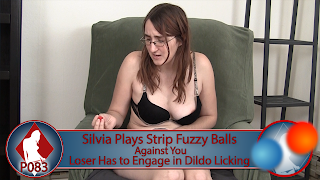 (Repost from previous week -- if you answered, I missed it.)

Here are some ideas I'd love to see done (with an acknowledgement that some of them may not be practical):

Game: Earth/air/fire variant. Only two women, and they just take turns for increasingly longer intervals. (Bonus: hands hand-cuffed behind their backs while playing.)

Forfeit: Woman tied to cross, male gets to conduct full examination of her body. (Lots of groping involved.)

Hey Red,
Any update on whether or not you're bringing Jelly back? Thanks.
-Joe

Hi Red! I've suggested a forfeit in the past, and you asked me to remind you from time to time so it didn't fall through the production cracks.

The game is for three or four players, who should be ticklish. Any game will work. The forfeit has the loser tied on a bed, rack, or the floor. The winners take turns riding the loser's mouth, while the other winner(s) tickle the loser. The tickling doesn't stop until all of the winners have gotten their fill of orgasms from the loser's mouth.

Any hope on interactive POVs. It's been millions of year waiting ;)