There are many like it, but this one is mine

Meet Trace, as he takes on Cierra and Gianna. I call him an ex-Marine in the clip description, but I'm not sure that's accurate. I think I've heard that there's no such thing as an "ex-Marine", just a retired Marine. This is a dude who's paid his dues. Watch him take on two girls at once to find out whether he gets to take on two girls at once... or whether he'll be at the mercy of the victorious ladies.

Cierra and Gianna will return in Episode 491, featuring Jay in a supporting role: 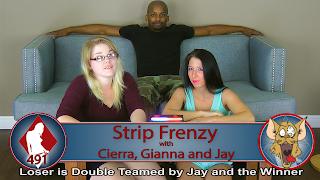 They play the new game Frenzy, another game which makes use of Marvin. (I'm concerned that Marvin's lights don't show up well enough on camera. Future revisions will address that problem.) The players each frantically hit their buttons as fast as they can, causing a bar to move closer to their opponent's side every time they press. First one to get the bar all the way to the other girl's side wins and makes her opponent strip. Naked loser ends up at the mercy of both the winner and Jay, who have a good ol' time with her body.

Is there any update on whether or not Jelly is coming back? Thanks
-Joe

Any update on whether or not that Kodak and Bibi episode has made the schedule?

Also any chance of Jennie or Erin returning in the future? Thanks.
- The Pin

Will Trace be appearing in any future games?

@Joe: Sorry, I have no information on when Jelly will be coming back, and I'm not sure she will. I don't know if she'd even be interested in it, and even if she were, I think she's already done just about all she's willing to do. N

@The Pin: No, I have no new information about the long lost Kodak and Bibi episode will air. Nor do I know if Erin will be back... but I've been in contact with Jennie quite recently and hopefully we'll see more of her soon. I hate being the bearer of bad news, so I'm glad I've at least got one bit of hopeful news.

@Bonnie: Trace was in a total of seven games, so yes, we'll definitely see more of him. I'm glad you like him. Thanks for asking, and giving me one more piece of good news to report.

I'm sure Caroline would be up to doing episode 500 since she has basically no limits when it comes to forfeits. It would be great to see Lela, Candle and Tobi as well. they would bring so much character and enthusiasm to it all. What do you think Red?

Any progress getting Jasmine back? Thanks.

@Bammy: I usually only see Lela and Candle when I travel back east, so I don't think they'd be available for Episode 500. As for Tobi, she's local, and I'd very much like to shoot her again. But I already have an idea for Episode 500.

@LoA: Whoops. There's a certain checkbox in the Clips4Sale store owner interface that I forgot to check, so the episode wasn't published on schedule. Thanks for bringing it to my attention. It's available for purchase now, but if you drop me an email at red@lostbets.com, I'll send you a free copy. Sorry you think things are worsening.

@MC: No further updates at this time, but it's still on my agenda.