So in the last blog post, a user by the name of The Pin asked if there'd ever be more of Erin, last seen in 2010. Considering she'd been gone for so long, I was about to tell him that it was unlikely but ask him if he'd seen her B-Side. (If you're a fan and you haven't seen the B-Sides, you should check them out. Many of our old favorites are represented there.) I was certain that Erin and Navarre had a B-Side, but when I went to find it, it didn't seem to exist. To make a long story short (too late), I found a cache of unpublished B-Sides, including the one I'd been looking for. And since we haven't done a month of double updates since Bextember 2014, and since there have been an awful lot of requests for another one, I'm declaring Multiple May. Each week in May, a regular update on Friday, and a B-Side on Tuesday.  We'll start with Episode B048, bringing back Erica, last seen in 2013 in Episode 368, and Daisy Rae, who has only been seen once before, in 2011's Episode 236. 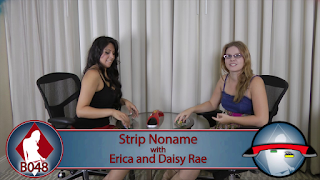 And The Pin, if you'll drop me an email (red@lostbets) I'll get you a free copy of Episode B058, Strip Memory with Navarre and Erin. I might never have found it if it weren't for you. Giving you a free copy is the least I could do.

Moving on to promos. In the last couple of weeks I've showed the ILAMC promos for April and Starli. Here's the next one. If we're gonna do more B/G, we're gonna need more B's, so meet JD.

He was introduced to me as Ana Molly's slave, but I'm don't know what that means exactly. He didn't seem especially deferential to her, and he sure had no problem dominating her if that's the way the game went and she lost.

Looking ahead to Episode 514, and the return of a veteran and a sophomore. 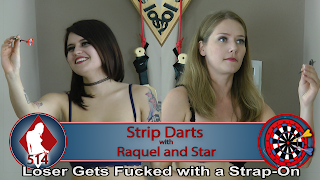 Raquel is eager to avenge her humiliating loss in Episode 507, which saw her gasping and writhing on the Sybian in the throes of uncontrollable orgasm while we all watched her. Star wants to keep that streak going, partially because she's really competitive and hates to lose, but also because she fears Raquel's revenge should she prevail. And since the winner gets to pound the loser's pussy with a strap-on, she'd certainly have the chance to punish her.

As much as I love Star, I kinda hope she loses Ep 514 just to end that winning streak!

@Bammy: Yup, Star is one of our winningest players, which can be frustrating. No spoilers, though.

@Bob: Yeah, I've got some old stuff, filmed in 2013, featuring Addie, Ashley, Mouna, Selah, Richard, and Conor. It also features a girl named Kylie, who is not one of my favorites and whose presence, IMHO, negatively impacted the quality. This is why I've postponed publishing them for so long. But a lot of people have been asking to see them, so I'm putting them on the publishing queue. Look for them later this year, and I hope they're better than I remember.

Hey Red can you explain what B-Sides are to me or at least tell me where I can find the definition of them? Also keep up the great work!

Watching the preview of the new guy, I hope I'm not going to be disappointed. For awhile, you had some pretty good looking guys, Dante, Eric, CJ, Trace. I know having good looking girls is the most important, but it can be distracting seeing guys who don't look good.

Having a guy in an episode just because he has a dick sometimes isn't a good enough reason to have him. Please remember that not everyone who buys your stuff buys the boy/girl stuff just for the tits, but to see good looking people having fun.

It's hard to buy a clip that has B/G when half of the B/G combo isn't that great. I'm not trying to be mean, but you should try and get the whole package. I'm hoping his "package" is the reason you have him.

While I agree in a general sense with what Anonymous May 1, 2016 at 10:52 PM -- please sign your posts! ;-) -- is saying about how those of us who like the B's in B/G games will still only buy if we actually like the B's, in Red's defense, that's a fairly subjective thing. For example, one of the guys you listed isn't to my taste, though I know others here like him. (I won't mention his name for fear of hurting his feelings if he reads this, though maybe that's worse because now they'll all wonder if I'm writing about them.) But this new guy might fit the nerdy hippie type I like (one of the many types I like). Especially if he loses with a particularly embarrassing forfeit on the line. So, yeah, fairly subjective. I mean, there's probably a spectrum with the Ryan Gosling types on one end and the Ron Jeremy-of-today on the other, and odds are there are going to be a lot more folks into the Ryan Godling types than the Ron Jeremy types. But for the folks in the middle, pretty subjective.

@David: A good question. I'll answer it in a blog post tomorrow before publishing B048.

@RS said much of what I wante to say to @Anon 10:52. First, I hope your misgivings are misplaced and you end up liking JD. I may not be the best judge of such thiungs, but he's a reasonably decent-looking chap. He does have a distinctive look which may not be to everyone's taste, but what look is?

It's true that I don't much care about the appearences of the men I recruit, but the same is true of the women. I'll give just about anybody a turn in froint of the camera whether they're my type or not. They'll be somebody's type, if not mine. I just might not invite them back for another round if I don't think they're not a good fit.