If you don't get the title of this blog post, it's because Episode 527 is publishing today, and in the United States, Section 527 of the Internal Revenue Code governs tax-exempt political action committees... oh, never mind. It's not that clever. Anyway, Episode 527, featuring the debut of Selina, the first appearance of Alisha in a non-POV, the return of Helena, and the long-awaited, much-requested return of Starli. Enjoy!

So as most of you know, I love to fulfill fan requests, but I'm also horribly disorganized. I should maintain a list of requests, but I don't, so generally the requests that get filled are the ones that stick in my memory. Well, I've got a couple of shoots planned for next week (at a minimum, one shoot with three players and one with two) and these are the requests I've remembered:


There are definitely others. If you've got a request, please put it here and I'll do my best. Keep in mind that with the shoots being next week, the Amazon window is rapidly closing, so if your request involves a specific piece of equipment I'll need to order, let me know soon.

Skipped the preview last week, so I'll do two this week. First, Episode 530: 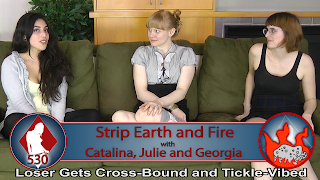 It's Earth and Fire, one of my favorite games. Catalina and Georgia are introduced to the game, which naturally they've never played before. Julie, on the other hand, played in our very first game of Earth and Fire all the way back in Episode 222. She also played it in Episode 268, and her record is 1-1, with her successfully holding back her orgasm once and succumbing the other time. The rules have changed a bit since those long-ago days, so we'll see how she does.

Moving on to Episode 531, we see some familiar faces. 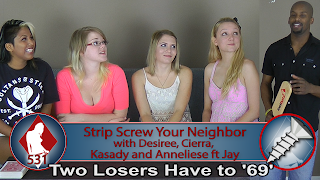 Jay serves as emcee and color commentator as Annaliese, Cierra, Desiree, and Kasady play Screw Your Neighbor to two losers. The first loser has to lie naked on her back and serve as the game table until the other loser is determined. The two losers have to put on a show, licking each other's pussies for the amusement and entertainment of the winners. And of Jay. And, of course, us. Enjoy!

Hi Red, I hope that you are well. Unless I am very mistaken, I do not believe that the Bex Rule has ever been invoked prior to a hardcore forfeit. I would love to see a girl having sex with a freshly-shaved pussy, which she only shaved in an effort to avoid the forfeit...

You asked for reminders of forfeit requests, so I'm just putting in a reminder for my tickling/facesitting forfeit: 3 or more girls, and the loser is tied on her back and tickled while the winners take turns on her mouth.

I'm curious about the "reading while being vibrated" penalty. I've only ever seen it as part of an ad campaign for Autoblow in which male models from Men.com (I think) had to read passages from Shakespeare while getting jacked off by the machine under the table. Not sure how it would work competitively, but I'm sure you'll make it interesting.

For the reading one, it may work better as a penalty, but if you have 3+ playersI reminded of a couple "wolf game" Japanese videos that operated on a similar concept to your candy passing game or the party game. One person is stimulated while the others (or one selected player have to ID who is really getting it and who is faking.

Hello Red,
I would love to see a tattoo forfeit.
Loosing girl becomes a tattoo. For example, "betsy".
I know that will be difficult to realize but i will
to see that. Especially if its the girls first tattoo.

"Reading while being vibed" could be a game. 2 teams of 2 players. 1 Player has to read a passage which her teammate has to repeat. Meanwhile the other team vibes the reader trying to prevent her from reading the text clearly enough for her teammate to repeat. If the teammate can't repeat the text correctly, both have to strip. Then the teams switch sides.

I would like to see a forfeit where 2 losers are fucked, by 1 guy each.

Anyway. Any chance of seeing Tobi or Judas any time soon? Preferably in a b/g forfeit?

Hi, is it possible to bring back Paige and Madison?
used to love them.
for forfeit you can use naked ear holdings sit ups (may be 20 to 30 times).bring some new good looking models
love your uploads. thanks :)

You have apologised several times for over-use of yoga poses as a forfeit to introduce new ladies. As far as I am concerned there is no need to apologise: you can use it as often as you like. In fact, I wish girls could be introduced to me like this every day in "real life"

thanks for bringing Starli back. hoping you can get her gangbanged again. she was hot.

I like the first idea submitted on this page.

I have requested before that newbies be subject to a forfeit of trying to do JOI without any instructions. I would like to see what true amateurs think would get the audience off. And the other amateurs commenting on knowing that the audience is getting off on seeing them in various states of undress.

I have also suggested that a multi girl game be played where the looser of each round gets taken by a guy. I feel that could be a multi part game with the audience wanting to see certain girls get taken. Would the audience want the girl with the most clothing at the end of the prior game to get taken the next game? Or would the audience be cheering for the most innocent looking to get taken? I know I would be cheering for the one most smug to get fucked as well as the one who looks most taken aback by the forfeit. I know you have mentioned what to do with the losers in the following videos. Maybe they could warm up the guy taking the girl in the next video with lap dances, hand jobs, etc. They could be on one side of the screen with the girls still in the game on the other side of the screen.

A new thought would be having the boyfriend / husband with the girl acknowledging that the audience will be getting off to their girl.

Also an old thought on wet and messy forfeits where the looser has to put on her clothing to have it destroyed in the messy forfeit. They could have the messy clothing cut off as more mess is applied. This would require that each girl wear nice clothing to be destroyed.

I also forgot to request the jelly, fern, jerome, and serengeli air hockey game. Thanks!!!

How about naked singing/dancing? Many people get embarrassed doing those with clothes on...

Keep up the good work,
Andrew

I second on the matter of singing/dancing

Paige losing to Madison for example

Red, did you forget the POV again?

Obv POV is late. But Red wrote on previous post, 9 hours before being late, that it won't be online today. Hope in one week it'll be online. Or I don't understand why he said "new videos on wednesday" but he pubblish every fortnight...

How about a "pee-holding" contest? Have the competitors drink water, coffee, soda, (beer?) etc over the course of the shoot day, with no bathroom breaks.

Final shoot of the day, competitors play a game which involves rounds where the loser needs to drink more. First person to lose control of their bladder loses.

The product has been great, but where are the jumping jacks? I think we all like titties bouncing, and it's a nice addition to pretty much all forfeits....

I also would like to see nude dancing, preferably by an amateur. And instruct them to incorporate a lot of shaking/twerking, both butt and boobs. (like a belly dance)