Episode 525 today, featuring Star vs. Helena, while a naked Raquel serves as the target for them to shoot at. This is the last I've got of Raquel for now, but I'll definitely try to get her back. By the way, I want to emphasize that despite her 0-3 record, none of her games were rigged or fixed. Fate or Providence or God or whatever decided that she should lose, and lose she did. It certainly wasn't from lack of trying on her part. This game, she can't lose because she's not playing, but all of her naked charms are on display throughout. Excellent.

I've responded to all the blog comments in the last post. After promising to stay on top of them, I slacked a bit later in the week, but now I'm all caught up.


Now, about that list of unpublished episodes I posted last week. My original plan was to take the most-requested of those and add them to the publishing queue, interleaving them with newer material that was already scheduled to be published. But that'd take a long time, with an old clip only being published every 3-4 weeks. Instead, I've decided to revive LostBets B-Sides. If you don't know what it is, it's basically where I put episodes that never got published and sort of fell by the wayside. (All of this was explained in the description of the store, but it seems to have vanished for some reason.) I still have some leftover unpublished B-Sides to get on there, and I'll add the old stuff from last week to that queue. That'll get them out much more quickly. For as long as I've got material, I'll publish a B-Side on Tuesday. I'll probably start next week, but the first few will most likely be pre-edited ones I've had sitting on my hard drive rather than new ones from the list. We'll get to them soon, I promise.

Looking ahead a few weeks: 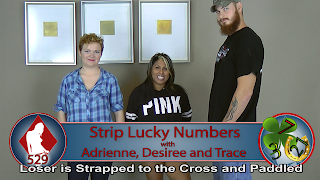 Voluptuous Desiree joins, um, Trace (I couldn't think of an adjective. Tall?) to welcome newbie Adrienne, with her red hair and her impressive natural tits. The game is Lucky Numbers, a simple game where each player has a number 1-3, and each round they pop a 3-sided die to determine who strips. The loser gets strapped naked and backward to the Greyjoy Cross while the winners give her a good paddling. That's Episode 529.

Hi Red. I'm just dropping by. You asked me to remind you now and then about a forfeit I suggested months ago: I suggested a three-girl game in which the loser is tied to a bed or on the floor, and the winners take turns on her - one riding her mouth while the other tickles her. The forfeit continues until the loser gets both of the winners off.

As I remember Piper said she was up for it when I first suggested it. I think it would also work for Helena, Raquel, and Star, which is what made me think of it.

Based on a response you made to the previous blog post comments, I've sent red@lostbets.com a Word doc listing all 82 episodes (prior to #500) that either haven't appeared or are no longer available on the member site. Watch for it!

Hi Red, thats really good News, so we get all this unpublished material.
About your offer to go to the shop about softcore material with Cyndi,Kymberly etc. I got this all. :( So i hope that the rest of it Comes fast enough to me.
But you promise that you publish it.
Wish you a good Weekend.

Thanks for the response. I know the stuff you're referring to, Hysterical Literature. I love the idea but understand if it's difficult to have someone doing the vibing with a hitachi or something. If you want remote control or just "permanently on" maybe something like one of those Venus butterflies, where it's held on by straps and meant to be worn under clothes in public? You obviously don't have to worry about hiding it but at least it's designed to be held on with no straps. One for each girl and then have them compete in some kind of game that requires skill, concentration, etc.

Also, was thinking about the following:

Sorry Red, forgot to include this link. Meant to be held on with no hands, and there's remote ones too, some just on the surface and others that actually have an insertable part.

And no, I'm not a sex toy salesman :) I just think it would be super hot!

Can you tell us when the next b/g hardcore action is scheduled?

A while ago I spoke about a large group scene, preferably with a hardcore ending. Any news on that?

Does zahara only do lostbetgames? Or can I find her by a different name getting fucked? And sheri?

@Scott: Yup, thanks for reminding me. We did something kind of like that in Episode 466, but not exactly. I'm planning some shoots and I'll see if I can fit that in.

@LSD: Thanks for compiling that. I'll see to it that the guy who runs LBG gets it.

@The Dancer: Well, I hope you like it when it comes out. I'll get it published as fast as I can.

@VM: I dunno, I think it'd be possible to have a girl reading some public domain erotica while her opponent vibrates her under the table, then have them switch places after the reader gives up or has an orgasm. Thanks for the links to the toys. The best pair of vibrating panties I've found is the one Tobi wore for Epiusode 500, but she stole them and I don't remember the make and model.

@René: The next hardcore b/g is currently scheduled to be Episode 534 but I think I'll probably move that up some. I haven't managed to get another large group shoot going yet. I was hoping to do that in one of the August shoots I'm planning but that's looking less likely to happen. (I'm not giving up though.)

@Anon 3:46 (please sign your posts): Zahara and Sheri had never done anything on video before LostBets.com, and I'm not aware of them having done anything else. I doubt it, though.

That sounds awesome - I'm definitely in favor of having the girls use a wand/toy on each other if it can work. You're the expert so I can't wait to see how it goes. If it works I think it would be a really fun game to use over and over.

Any more spanking POVs coming up?
Also, did you ever consider a CEI POV or similar?

No way to have POV videos on time?

POV again not up. Why?

@Zed: I keep meaning to, but keep running out of time before getting to it. Next time I’ll do it earlier in the shoot.

@LoA and @Anon 7:11(please sign your posts): I’m sorry about that. I’m out of town and forgot to punish this week’s POV before I left. I’ll get it out as soon as I’m back on Monday. You may know that a lot of the POVs were filmed by someone else and I’ve never been very satisfied with them. Not that there’s anything wrong with them; they’re just not the way I would have done them. Next week’s POV is one of the last few of those, then we’ll move into the ones we’ve done ourselves.