I am so glad to be bringing back Nettle and Leilani today in Episode 541, along with new girl Endza. I think she's a great addition to the LostBets.com roster. More of the three of them to come, including perhaps the most amazing game of Shockinaw I've ever seen. Hint: they didn't hold the handles in their hands. But that'll have to wait a bit.

One thing that won't wait very long is next week's Episode 542. 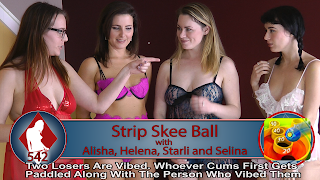 Veterans Helena and Starli return with newcomers Selina and Alisha to make one of our most recent foursome to break in our new Skee Ball table. Unfortunately the table turned out to be not very good for reasons I'll talk about when the game is published, but it's still fun to watch, and there's something uniquely special about watching a bottomless woman bowl. And it segues into a forced-orgasm contest like the one in Episode 253. Losers suffer a paddling.

And then, for those of you who've wanted to see more hardcore, there's Episode 543. 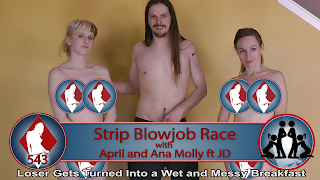 As for more people we'll meet in 2017, this is Gracie, not to be confused with Grace.

And I can't believe I haven't promoed Kendall yet. She'll make her first appearance soon in Episode 544, along with Dylan, Tyler, who also will be making their first appearances, and Sassy, already a mega-favorite with the fans. By the way, when I say "first appearances" I don't just mean first appearances at LostBets.com. None of these young amateurs has ever been naked on camera before. None has exposed her naked body to hundreds of strangers online. Until now.

Hey Red, Emailed you as per your request, wondering if you ever published the scene with the JOI forfeit? Thanks! -SP

I asked if a return of Mouna and Grace is an option.

Any chance of seeing zahara again

Any chance of seeing zahara again

An excellent idea i think would be getting 3 couples together - playing a regular game - stripping can be everyone or just females etc... there ends up 1 winner, the 2 female loser have a BJ race wit a facial, the loser of the BJ race then must get facial from their patner and suck off the orignal winners man for her 2nd facial.

On the whole i feel forfits that are actual punish the losers rather than getting them off are always better.

Keep up the good work all of ya at LB

Hey Red, is there any chance of getting Tomiko back for a few games? I would love to see her go up against Candle and Kym (earth and fire maybe?)

I haven't thought too much about the logistics of this, but I have a suggestion. A game I'm a big fan of is Earth and Fire- it's fun when a climax is part of the game's objective rather than as the forfeit. I've had an idea to tweak it slightly as a different game- three girls take it in turns to control the timer. The girl who controls the timer picks a time between one and sixty seconds, and sets the timer. A random selection is then done to determine which girl will be ganged up on by the other two. This adds an element of risk to it and makes it like a game of chicken- the players will have to pick lengthy enough amounts of time to make their opponents orgasm, but risk orgasm themselves if they pick a high time and are selected themselves. Sound like a game that might be played in future?