There's a new and exciting forfeit on Friday , but I'll talk about that in a bit. First I want to say that there's going to be a bonus update on Saturday, and I really like it. Here's a preview of what you'll see in Episode 602a:

Ahem. Now on to our headline attraction, Episode 602. 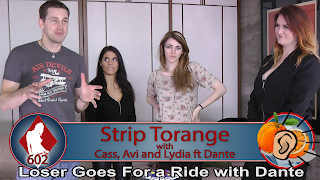 Small, Medium, and Large... er, I mean Cass, Avi, and Lydia are back to play a game of Torange. I need to make some improvements to that game, starting with making our own category cards, but that's not important right now. Whether or not the game is flawed, these girls are going to play it, and as they lose, they'll be exposed. The title card above just says "Loser Goes For a Ride with Dante", and Dante himself tries to keep the forfeit a little vague when he describes it, but I've already talked about the ride on this blog, so it's not a spoiler. Yes, Dante and the loser go for a ride. And while they're riding, the girl strips completely naked and proceeds to bend over the center console and give Dante a blowjob, as he drives through the streets of Seattle. Fun.

I promised last week that there would be more promos to come, so here they are. Some of these I may have published already. Those of them I haven't, I can't believe I haven't. First up is Keenly, who doesn't sound very enthusiastic as she delivers the line.

Then we have Lavender, from a very low angle for some reason.


And here are RyAnne, Belle, and Ana Molly.

Wow Roxy is hot! Anymore of her?

I hope you can bring Geneva back... I like her, and she's hot.

@Shredder: I'm glad you like her. There's more of her to come, and I can probably get her to come back for more. And just wait 'til you see Episode 606. I've been eager to show it ever since I filmed it in September. If you like Geneva, you'll love it. Hell, even if you don't like her you might love it anyway. It featured an ending that took everybody -- the winners, the loser, and the crew -- by surprise. And it was amazing.

Yeah, chew on that for four weeks. Ain't I a stinker?

Hi Red, As Julie seems to enjoy herself so much perhaps you could set her some home work. By this I mean give her a few challenges perhaps once a month and provide back the proof either a video or photos.. a few examples -
- Photo at a supermarket wearing only a coat and shoes, a see-through top in public.
- Get a male friend to paint a bikini top on her and too show it off in public, maybe a drive through.
- Change all your clothes in a car park from the back of you're car.
- Eat a restaurant with a shirt completely undone.

Red, do you still have connections over at Yanks? Any way to get Verronica from there to play some games at Lost Bets? She is absolutely stunning.

Red, I'm having a problem with the new Julie video, 602a. QuickTime won't play it and I can't get audio with VLC player (I'm on a Mac so I don't have Windows Media Player). Any suggestions? Thanks.

first of all i love your work:-)

I enjoy watching the games and the forfeits. i for myself are more in embarrassing and humilating forfeits...but that doesnt matter...i like the others too:-)

I ve some suggestion/wishes for forfeits.
First of all, its been a while where you had shown a headshave forfeit. Perhaps its possible again.
Than what you think about a forfeit in a locker room? loser must give all clothes out and hands it of to the winner. must stay than in the locker room for a few minutes.
Another idea is using whats app. loser must post a nude pic in status or winner can make some pics and its allowed to post it to five phone contacts.

fine could be if theloser must go outside and ask some person on street that she lost a bet and must strip now. she must find a few watchers she can strip in front of. good are some girls to cause i think its a litte more difficult to find girls. another thing can be that you fine some new players:-)

and than the last idea so far. the loser must funnel a wight gaining drink. i believe thats not fine for the girls to know how much calories they drink in that moment.

i know its not easy and i know the most things work best with real amateurs and its hard to find them. but who knows....:-)
only a few suggestion....

I've bought quite a few and 502 was pretty bad and not up to the quality of everything you've put out. I dare say it might have been better left on the cutting room floor.

Hey Red just wondering if there were gonna b any more b sides realeased soon? specifically the one w/Kodak!!!?


is anybody else having issues with 602a, the julie bate clip?

Im just a bit curious as to how you actually find the girls and contestants? Is it by word of mouth? Have you thought of filming and producing and publishing the extra material showing the girls arriving and dealing with the pre shoot work but also after finishing, sometimes that material could be very interesting and entertaining!

got the same problem, video is flickering all the time

Also Pete, but a different one. said...

I also had problems with the Julie video. Thought it was just me but came here to double check.

Hang in there guys... red is working on it. He sent me a replacement that didn't work either, so hes on the case.

Has this been resolved yet?