The gigglers are back! Indigo, Lavender, and Luna return to titter and tee-hee their way through a shocking game of Shockinaw in today's update, Episode 428. One of our most artistic drawn-on-with-markers forfeits follows.

Next week, it's a big game as six girls spin the Wheel of Torment in Episode 429. After the game is over, the Wheel of Torment is replaced with the Wheel of Punishment, and the two losers have no idea what their penalty will be until the game is over and they spin. Meet new girl Harley as she's joined by Hannah, returning after her last appearance in Episode 304, fun-loving and wild Kym, Catherine's little sister Nikole, and one of my personal favorites, voluptuous Lela. And capping it all off, ultra-veteran Ashley. Check it out. 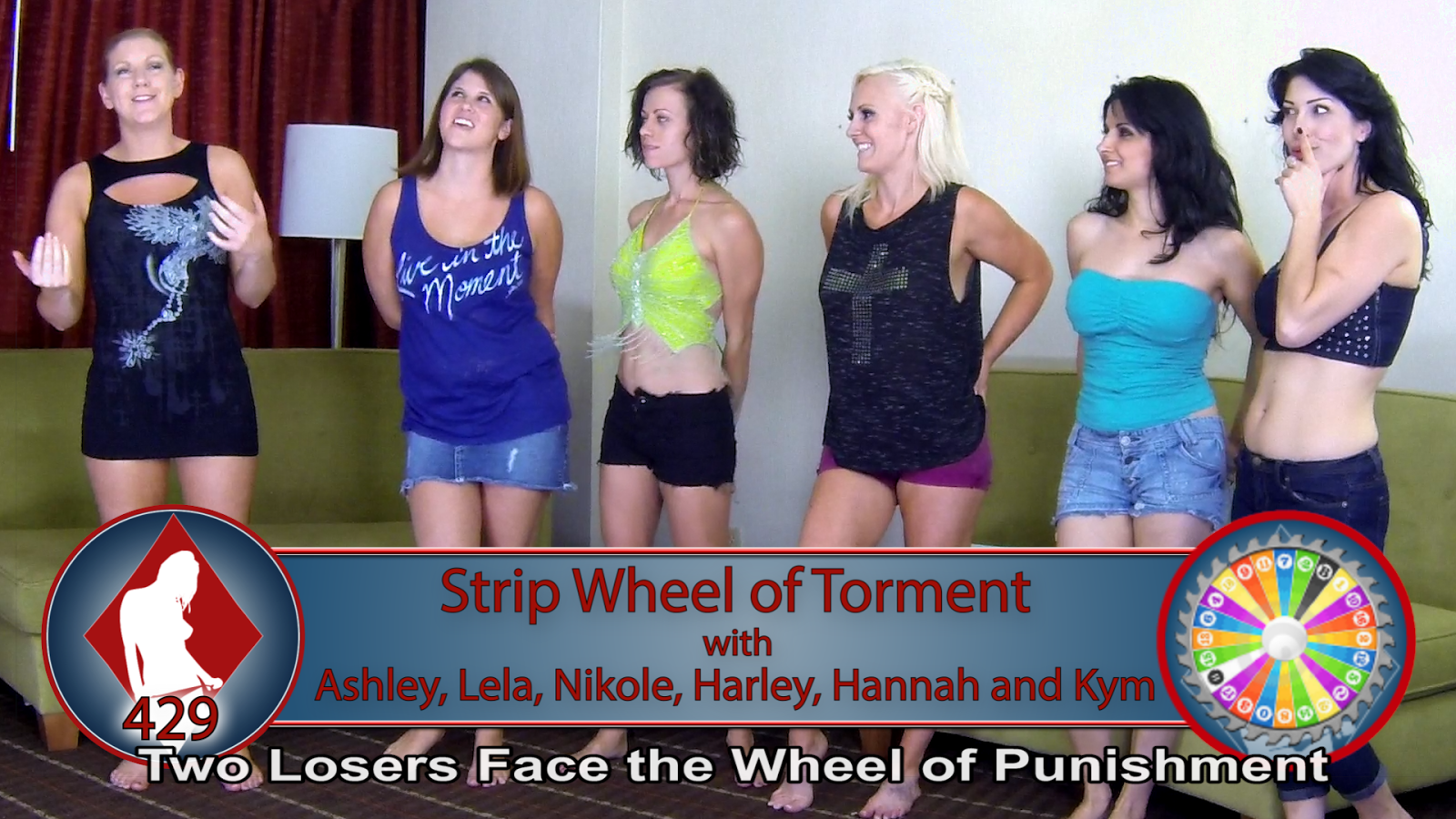 By the way, just a reminder, folks: we've been a bit slow to pick up on this whole social media thing, but we've been tweeting lately. Our Twitter feed has preview images, behind-the-scenes looks, and a chance to talk directly to some of your favorite players. So if you've got Twitter (and don't mind finding out which of the players are professional models), follow us @LostBets.

A wheel of torment with hardcore stuff would be cool. Get a guy or 2 in on it maybe.
-sdabomb

Oh, I forgot to mention this week's POV. It's a twofer, as Starli and Treasure team up to take you down.

Any 1v1 guy vs girl coming up?
Also, you might as well previewing POVs in your posts Red, ha.

@PRD: You're right about the POVs. I meant to preview this week's POV in the post but forgot. As for 1v1 BvG, I don't have any on tap. Those are tough, because what do you use for a forfeit? Guy wins, he gets to fuck girl, girl wins, she... gets to fuck guy? Doesn't really work that way. (It does work if the "girl fucks guy" scenario involves a strap-on, but few guys are willing to endure that.) I'm open to suggestions for good forfeits for one-on-one guy-against-girl games.

A wonderful episode for me as a paint fetishist.
Sets a new standard for marker forfeits.
Love how the two winners really wanted to do the drawing together.
Just missed more paint on her pussy but thats why I am fetishist (there so few. :-( )

You're doing such a great job, Red!

@damndable: Now there's a C4S category I don't have anything in yet: ruined orgasms. I'll give it a try.

@Chris: Thanks!! It's always a bit of a gamble when I let the players exercise their own creativity, but in this case the winners really grabbed it and ran with it and came up with a great result. These three girls have one more game, and the losers get really painted, like in Episode 423.

sorry but I thought this most recent video was a snore.

What about a FvF and the loser gets a gorilla mask? Loser has to shave the pubes off of a gent, blow him, take a facial, then gets the pubes rubbed on her face, thus making a gorilla mask. That would be a very humiliating defeat.

Cartman gives himself one in the episode "Scott Tenorman Must Die."

Hi Red,
Not entirely happy with the idea of episode 429 scheduled for this week.
Nothing against the idea of forfeits for the losers.
But, with the ratio of players and potential losers of the game. 6 players and only 2 losers?
Why not more losers, 3 or 4?
This means that only a third of the players risk losing, rather than half or the group can lose.

Been following the majority of games, and it seems that most games have a losing ratio of less than 50%, as there tends to be more winners than losers for most games.
Sorry, but just needed to stress that bit of criticism about the games.

@Anon 7:39 (please sign your posts): Sorry to hear it. Can you offer any suggestions as to how it could have been better?

@Will: That's disgusting. I like it. I'll see what I can do. Classic South Park episode.

@Zeo: Thanks for the criticism. It's true that in most games, 50% or fewer players lose. The reason is that I want the girls to have a real, legitimate shot at winning and avoiding the forfeit. It makes them more competitive and determined to win. If they go into the games with the odds against them and they'll most likely have to do the forfeit, I don't think their attitudes would be as good.

I think it's good that more often than not, the ratio of losers in less than 50% because it makes it that much more satisfying (and makes me more likely to purchase) when one of the players I want to see lose actually does.

Given the way Red structures his taping schedules to have a group of players play multiple games, it makes it gratifying to see someone you want to lose finally lose.

Keep up the good work, Red.

Forgot to sign my post as Anon 7:46. I can't wait for this week's POV episode as Treasure and Starli were great individually. JC.

Red, we getting some more of Catherine in the near future?

@JC: Thanks. The downside, of course, is that some of the girls never do end up losing. Kinda sucks when that happens, but that's part of the price for keeping it real. Besides, if a girl goes undefeated, she can always be brought back. In fact, I recently filmed two girls who put their once-perfect records on the line. We'll see what happened. Hope you like Episode P032.

@Faithofheart: We'll next see Catherine in Episode 434, slated for publication in mid-November. She'll be spinning the Wheel of Torment along with Ashlyn, Kym, and new girl Jessica. Beyond that, she recently played in a new batch of games but they're not on the schedule yet.

i like the idea of only one loser, no mater how many players are involved... that, in a sense, is what 'loser' means.

Update to @Faithofheart: we'll actually see Catherine earlier, in Episode 431. Originally, 431 was going to be the last one from the series with Indigo, Luna, and Lavender, but they're proving to be rather unpopular so I'm gonna hold onto that one for awhile. Instead, we'll get Catherine vs. Angel, with the loser getting wet and messy. We haven't done one of those in awhile.

I like Will's suggestion. It would be even funnier if the girl was also using some of her own pubes thrown into the mix!

I have to agree that it is more fun to have girls loose after a winning streak. Sort of builds the anticipation. Especially with the newbies who have not been nude on video before. It is fun seeing them loose their dignity (or do a forfeit never done before by them) by having to pay the penalty for loosing. So I am one who is in agreement that having more winners leads to the anticipation of that special girl finally loosing.

Also great to have the girls return to put perfect records on the line. Really leads to a cheering section (if not seen here) for their opponent.

Swing. And another miss. For POVs when it's a simple masturbation forfeit please try to always have the two versions for the viewer winning and losing. The JOI is the only time I really feel the interactiveness is there and that 4th wall is broken. Today's video with two girls could have been incredible. It's simple and some may think it's stupid but it's that real feeling and literal POV sensation I think you were going for with the POV store Red. None have been perfect but with only 4 attempts on record who knows what they could become somday. I don't know, I'll just always be here waiting every wednesday and friday to see what you're cooking up then. Keep doing your thing LB team.

Can I just say how much I love LostBets!! Even while not being filmed I have started playing games with my friends with some fun consequences. You guys come up with some fantastic ideas!

What are the forfeits on the wheel of punishment? Do the 2 losers spin once have have them both perform the same punishment or do they spin separately and have (most likely) 2 different punishments?

@DG: Sorry you were disappointed. If it's any consolation, there's a POV with multiple girls and multiple endings coming up in a couple of weeks.

@tobibraxton: Thanks!! For those of you who don't know, Tobi is Bex, who wanted to change her stage name. There will be some games in the near future where she plays as Tobi. Tobi, I'm sure everyone would appreciate more details (or pictures?) about your games with friends :)

@Roger: The two losers each spun independently and each had to do a different forfeit. The spaces on the wheel are:

I love the idea of pitting several undefeated players against each other to force at least one of those records to be broken.

What kind of forfeits are in the next few pov's?
PQ

I put a lot of the pictures on my twitter @tobibraxton :) I might have to steal some ideas from our very creative fans!