For whom the Belle tolls

Episode 503 today, where I get to introduce Trinity. She'll appear alongside Lela and Monica. There's not a whole lot more of her, but what we've got is pretty good.

Here's #2 of the returning players I've been teasing for a few weeks. I hope I'm not overhyping this. I think I probably am. But here's Belle.

A favorite member of the Circus Folk, Belle is one of our most exuberant and excitable players, a real treat to watch whether she wins or loses. She'll be appearing next week in Episode 504, along with RyAnne and Ana Molly. (Next week, I'll introduce the third and final returning player.) 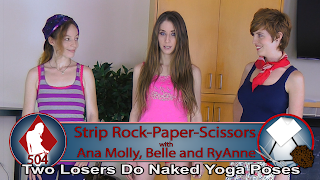 Like usual, I introduce new players with a simple game and a simple forfeit. But the "simple forfeit" turned into something special. Possibly the best yoga pose forfeit we've filmed, and certainly the best up-close camera shots taken by a winner. The winner was gleeful as she taunted the losers and put them through their paces. Good stuff.

This will be followed the week after by Episode 505, putting together relatively new and timid Kasady with veteran wild-child Bailey. 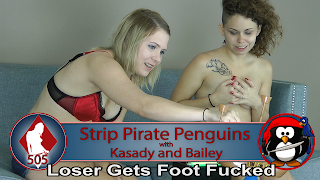 I was trying to think of a forfeit for these two girls, when Bailey piped up with "How about foot fucking?" According to both girls, neither had done such a thing before (although I have my doubts about Bailey) and I always love getting girls to try things they've never tried. And it turned out to be surprisingly hot. Dude, that's toe up. That's toe up.

And then it's on to Episode 506. (Yep, the list of available promos is growing again. More to come.) 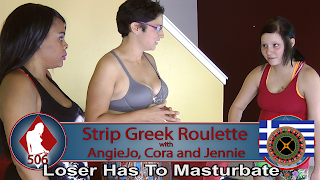 In Episode 501, the loser had to reveal her naked body to the cameras and the crew and all of you for the first time ever. She sure did blush while doing it. Now these three amateurs return for their second game and higher stakes. Not only does the loser end up exposed, she has to masturbate in front of everyone. It's another first for the loser (I don't think Jennie ever masturbated on camera, but I could be wrong) and she blushes even harder than the loser of the first game. Yet embarrassing or not, the experience of rubbing her own pussy knowing that dozens of people will be gawking at her got her very excited, with obvious results.

awesome I have a question though have you heard from Lily lately she has always been my favorite girl her and her awesome bush :)

I love Belle, glad to see her back! Anything from the original 2: Ashton and Mia, I was a big fan of Ashton's?

@Chris: Heh! As a matter of fact, I have heard from Lily, quite recently. She was there, working a camera, at these last couple of shoots. She recruited all the new girls. who are friends of hers. I begged her to take a turn in front of the camera for the sake of her many fans, but she laughed and wouldn't do it. I won't give up, but for now, Lily and her awesome bush insist on staying fully clothed.

@Anon 7:10 (please sign your posts): I've recently been in touch with Ashton, who doesn't do modeling anymore but who sounded at least a little bit interested in a return. Mia's almost definitely a no-go: last I heard she'd gotten a job where it would really hurt her career if recent naked pix surfaced.

Great to hear that Ashton is considering returning. She had such a great smile when she lost in what is still my favorite clip on this site. And such a pretty pussy as well.

Maybe you could pair her with some of the girls with tighter limits and we either get some great views of her again or she gets to introduce some of the others to showing off as she did.

As she said, there is a first time for everything. Too bad she will never get to get revenge by having Mia strike the same positions.

Sorry Red I didn't sign my name to the comment about Ashton and Mia! Great to hear Ashton might be coming back! Happy belated Anniversary by the way!

Very nice to see Belle coming back. Will we see her risking some b/g action?

Just want to make it clear: it's by no means certain that Ashton will be back. But I did tell her that a bunch of people were excited to hear that she might be coming back, and she seemed happy to hear it. Keep in mind that if she comes back, it'll most likely be for a single shoot, most likely with very tight limits. (Even "showing pink" may no longer be on the table.) But she's such an awesome competitor that I don't think it'll matter. Goddamn, was I lucky that she was my first player.

@Rene: No B/G in this particular shoot, but possibly in the future. (Or possibly not. I believe she's met the love of her life, who may not be cool with her banging other dudes. We'll see.)

Umm...did you spoil who has to masterbate with the above description about Jenny?

Also my name is a reference to my birth year...I know it's lame.

@Seahawk88: No, on the contrary I was trying to avoid spoilers. I said that the loser had never masturbated on camera before. For Cora and AngieJo I knew for certain that was true since they'd never been on camera at all before. Jennie had been on camera, but I was only mostly sure she hadn't masturbated. So just in case I was wrong, I mentioned that so it wouldn't be partially spoiled by narrowing the potential losers to two out of three.

That wasn't very clear, was it?

Also, my name is a reference to my hair color, so I'm in no position to judge you for referencing your birth year in your name... you young whippersnapper.

Funny thing about the number 88. I was once corresponding with a girl who signed her emails to me "88". I was seriously confused, since as far as I knew, 88 was skinhead code for "Heil Hitler" and I couldn't imagine why she would be telling me this. Turns out 88 is also Morse code shorthand for "love and kisses." Not a great place for ambiguity, what?

Another person I know uses 88, and he unrelatedly was born in 1958. Turns out that 88 is also the same number of keys on a piano and he's a semi-professional pianist.

Hey Red anything from Ashley or Sammy? I miss your girls from early shoots!

@RS: Also the model of Oldsmobile owned by my first girlfriend.

@David: I've recently learned never to say never, but Ashley's return is very unlikely. Like Lily, she's moved to the other side of the camera and isn't interested in posing in front of it anymore. Sammy I don't know about. I'll ping her and ask if she'd be available/interested. But as for our earliest players, we've got one coming up. Promo on Friday.

Any idea where I can get Ep 217? the one with Strip Juggleballs with Kandie, Kamora, and Isis. It isn't in the clips4sale store.

Thanks and keep up the great work!

@Ryo: Clips4Sale requested that I remove Ep 217 because a dog incidentally wandered into frame when we were shooting. The dog was not portrayed sexually at all which I believe makes us safe as far as U.S. obscenity law is concerned, but it's still against C4S's policy. I think the clip is still available at the membership site, so you ought to be able to find it if you sign up with them. (If you decide to do this, I'd appreciate it if you clicked through the link at the top of this blog.)