Episode 505 today. Bailey and Kasady, doing a forfeit that I don't think I'd ever even seen before, much less filmed. These are two girls who are both very cute but in two very different ways, Enjoy,

Let's get to some promos, shall we? 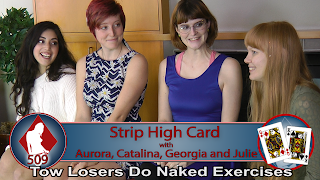 It's the debut of Aurora, Catalia, and Georgia, and the return of Julie, in Episode 509, to be published on April 15... for our American fans, a little sweetness to help ease the sting of Tax Day. 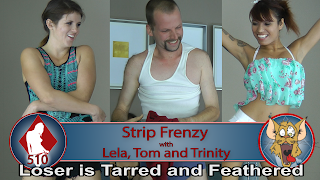 Trinity and Lela are back, along with newcomer Tom. They whip out Marvin to play Strip Frenzy, with the loser being tarred and feathered. Okay, so the feathers are really cotton balls and the tar is really blackstrap molasses, but it still makes for a heck of a visual. Coming on April 22.

Here's the promo. Next! 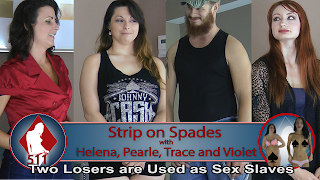 Episode 511 introduces new girls Pearle and Violet, who join Helena and Trace in a free-for-all game to two losers, who have to submit to the winners as their sex slaves. Trace was really apprehensive about this one (submission is not really part of his character) but was talked into it. And here's the promo for that one.

That takes us to the end of April. You guys want me to keep publishing promos for upcoming episodes? At this point, anything new I show off won't be published for quite awhile.
Posted by Red at 3:32 PM

Just bought episode 504 with Ryanne, Ana Molly and Belle and it may be my favorite one of all time.

@Ames: I have begged and begged and begged Lily to come back, but she won't. She's on the other side of the camera now, and in fact she helped film the shoot that 504 and 508 (and 519, and 523) are from. She's cut her hair (on her head, anyway) and looks even cuter now. I'd love to shoot her again. But she cruelly refuses.

Speaking of other players, while they might still be available, I'd also like to see a certain "collection" of players, mainly, Dolly, Nettle, Sheri And Zahara.

If those four played together, I'd probably die of joy, among other things.

Nettle somewhat reminds me of an old crush, both in mannerisms and body type, and the other three? Well, I have a certain "type", shall we say.

It's probably not easy to swing those four together, But I'll take any video those four appear in, together or separately.

jumping from that, I really liked the POV game they played a while back, and I'd like to see them do more.

As for the promos, I do feel the posts can get a bit too dense, maybe pacing them out would be a good idea, but that's just me.

@Viredae: Thanks for reposting your comment from the last thread. I'm sorry I didn't respond to it sooner.

I believe that both Nettle and Dolly would be interested in coming back. I'll try to recruit them for my next shoot. Well, not my next shoot, which will be taking place Monday and Tuesday of next week and whose rosters are already set, but the next one after this one. Sheri and Zahara I don't seem to be able to get in touch with. I'll have to ask Tobi if she can help me track them down.

will there be any more snip kind of games I liked those a lot :)

Hey Red. You mentioned a little while ago that you had some games featuring the likes of Ashley, Mouna and Selah but you were unwilling to release them because they also featured Kylie. Have you changed your mind on whether to release those videos? Ashley is not coming back so surely you can give her fans something to cling on to now that she's retired (I think Mouna might be gone too?)

@Chris: I don't have any snipping games on hand at the moment, but I can make more.

@Bammy: Bleah. I've gotten so many requests for this, and it's true that Ashley and Mouna are gone and unlikely to return. I'll think on it.

Another voice in support of nettle and dolly returning! Their last game was particularly amazing and at exactly the level I like best. Maybe they should go up against some new girls in a team competition. Maybe a sybian race...

Hey Red, just had a thought. Ever consider a POV of earth and fire? Maybe have the girl on a sybian that gets started on her turn, have her jerk off the player?

First, an announcement: Clips4Sale is having problems, and I can't set today's POV to publish. It might be delayed a bit.

@m: I'll see what I can do. I'm pretty sure they'd both be happy to come back. One problem with doing a Sybian race is that I gave our second Sybian to Tobi. I suppose I could get another one, but maybe I'll look for something new and different.

@Swedishguy: Maybe. I don't often have three boys and three girls all of whom are willing to play with all the others, though. I should look up the circus folks again. I did just film an Earth and Fire game with two female players and a male player, which isn't at all what you asked for.

@J: Not a bad idea; wish I'd had it yesterday when I was filming. Next time.

Hey Red. I was just wondering if Ginger did any more shoots for you? (she did the dice roll game against Penny). She seemed so confident and fun so I'm hoping she did more games!

Bammy, Episode 468 is the only main store episode Ginger did, but she appears in POVs P094 and P085. I don't know if the POVs are to your taste, but if you want to see more of Ginger at LostBets.com, those are your only options, at least for now.