Episode 269, featuring the return of Dre, Annabelle, and Britney S, publishes today. Will Dre get her revenge on the other two, who made her parade around in the slingshot swimsuit in public? Stay tuned to find out.

Speaking of very small swimsuits, check out the new inventory in the LostBets.com wardrobe:

Thanks to commenters DaM and Dave for the suggestion. I'm not sure when they'll be used yet, but they will be used.

Also, here's a peek into what's ahead. I already said that episode 270 stars an utterly defeated Angel trying to reclaim at least a little dignity by challenging newcomer Lance to a game with the winner enjoying oral sex from the loser. Episode 271 is a team game: Julie and Kyle vs. Fern and Lumen. The forfeit is wet-and-messy, plus a shower scene, plus some bonus action in the shower that took me by surprise. I'll say this again when it's closer to publication, but 271 is one of my personal favorites. Everything clicked, and I think it'll be remembered as a classic.

272 brings back Alice, Marie, and Leda to play a game of Croc 'n' Balls with a forfeit that's been requested a few times: foot worship. I still don't think we nailed it, but this is maybe the closest we've come.

273 will probably be remembered as well, but for a different reason than 271. It goes someplace I haven't gone since Episode 155, and then it goes farther... much, much farther. It's one on one, boy vs. girl, with the winner doing whatever he (or she) wants to the loser. What did he (or she) want? More on that when it's closer to publication, but on three occasions the cameras caught me saying, "Whoa... that's different."

274 introduces new girls Betty and Veronica, and also introduces my spiffy new Pockey table. What's a Pockey table? First of all, it has nothing to do with Japanese cookie sticks. No, it's more like one of these: 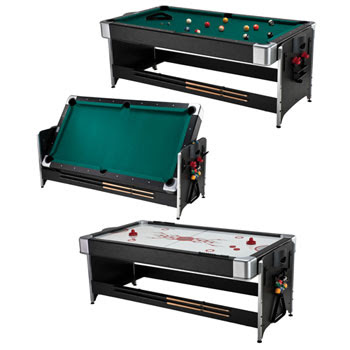 Half pool, half air hockey. Sure, it's not the best pool table and it's not the best air hockey table, but at least it's both in one. I just love being able to buy shit like this and quite legitimately call it a business expense. Both pool and air hockey worked great as stripping games their first time out, I can't wait to use them more.
Posted by Red at 9:18 AM

Hm... Why do I interpret the description for 271 as that Julie and Kyle lost, and got frisky in the shower helping eachother clean up? Is that weird? Any thoughts on that?

Once again the names of the girls in the image for clip 269 do not correspond to the order they are standing from left to right. Not a big deal with this one since Brittney S. is a veteran but thought I would give you a heads up.

i demand the immediate release of 271.
NOW!

Love lostbeta.com (your beta test site). Although 'bets' and beta' are so simillar I did not get it at first. Excellent start. Looking to see win/loss records posted for players here. Not individual games, but for players that have played more than x games. Also if you could link it directly to the clip4sale clip for purchase it might boost your sales.
Interviews and extra free pics, clips and other promotional material. Looks like you could be running your own site soon.

i demand the immediate release of 271.
NOW!

@JAORG: Gee, I don't know why you interpreted it that way. Do you think that's what happened? I'd tell you, but that would be a spoiler. I will say, though, that one of the losers did smuggle a hot dog into the shower, which may or may not have been involved in the ensuing shenanigans.

@Albert: Ah, I think I've figured it out. See, previously we selected the poster frame out of the handful of frames during the intro where the complete title was visible. But it recently occurred to us that often the best poster frame isn't found there, and it's easy enough to overlay the title on a different frame to make the poster frame. That works better, and leads to better poster frames, but sometimes the players move around and the poster frame doesn't match the title anymore. Now that I know what the problem is, we can keep an eye out and make sure it doesn't happen again. Thanks for the heads up.

@CA Fan: While I appreciate your eagerness, no can do. I don't have enough of a ready-to-publish backlog right now to be able to afford another double-update weekend. We (especially Johnny) have been busy on other things, like several killer shoots, and the reserve pool has gotten a bit low. I'll be doing more double-update weekends once the well isn't quite so dry.

@Jack: I'm glad you like it. I was playing around with it on and off for months, before handing it off to Judge who cleaned it up and deployed it, and is working on additional features. Including many of the ones you've asked for.

Will be interested to see how lostbeta.com will come along. Something that might be interesting for you (and good for those of us without too much money) would be to offer a streaming subscription - where either you can stream an episode for less than the cost to download it, or you can stream all the episodes for 1/nth of the cost of lostbetgames.com.

@swedishguy: He's Bob, she's JC (not to be confused with Je C). Neither has appeared on lostbets.com before.

@swedishguy: He's Bob, she's JC (not to be confused with Je C). Neither has appeared on lostbets.com before.

Have you pictures on the newbies ;)

I'd like to congratulate you on finding Annabelle. She is fun, has a great body, marvellous nipples and the best bush we've seen on your site since Elora. She reminds me of how women used to look. Let's see more of her, please (and I mean that in every sense)!

How about a fashion show displaying the Lost Bets dot com Swimwear?

How about a fashion show displaying the Lost Bets dot Com thongs & duct tape? Would love to see Julie in one, though I don't know how she would do as a loser in a bar - but certainly wouldn't turn down the opportunity to see her lots more (and lots more OF her).

Which brings me to another idea: a bikini made entirely of duct tape. No clothing, just the tape, taped to the losers' bodies. After being forced to parade somewhere publicly, if possible, they are then filmed showing the winner(s) pulling the tape off the loser(s). If the loser is a girl who hasn't shaved in a bit (or a particularly hairy guy like Kyle), the forfeit will consequently result in some depilatory action as well.

No B side again this week, Red. What have we done to upset you?

Red its march madness time. Now Im not a huge basketball fan or anything but where is the lostbets tournament? Maybe it could be a backwards tournament where the winner does the forfeit but the loser has to play in the next round where the forfeit is worse. I havent really thought anything through but im sure there are many possibilities along the tourney theme.

I cant even remember my comment of the swimsuits ( they are the dissolving ones right?) also wondering if there is any progress on your PoV interactive strip games (really dieing to play them Im sure they will be a huge success once you succeed) maybe you can kinda surprize the girl with its disolving nature for a bit more fun to us :))

as always wait for your reply
DaM

new update preview pretty much gives away the winner

@DaM, as a matter of fact there has been progress on the interactives. Good progress. That's what I've been having Casper work on instead of B-Sides, and the kid shows real promise, it's coming together nicely.

And I was actually talking about the size-zero microkinis from Bikini Beach.

@n: There's a forfeit dedicated entirely to feet coming up. Hope you like it.

@Everybody else: I'll catch up soon.