The return of the slingshot

When I published the first game with newbies Hannah, Lakota, Michelle, and Siren, I mentioned that they played a game where two losers had to put on the slingshot swimsuits and go down to the bar. A fan named K asked if that one could be moved up in the publishing queue, and I agreed. I'm seriously having second thoughts about that -- it'll raise expectations and make it harder for me to refuse such requests in the future -- but it's too late to do anything about it now, so please enjoy episode 298, as the four of them compete to see which two of them will be the first to do a double walk of shame. Enjoy.

And now for this week's megaparty guest. With a beard that would make Seneca Crane sit up and take notes, say hello to Chester. 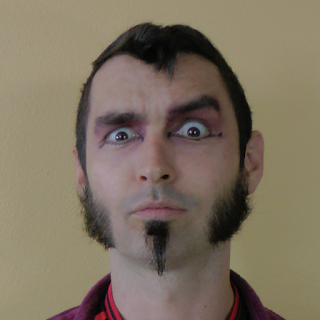 That brings us to fourteen players: five guys, nine girls. And believe it or not, I'm still not done. See what I meant when I said that this was a record-setting event, and that record is unlikely to be broken anytime soon?

My comments about bushes last week referred to female bodies, not the faces of men like Chester.

As for your rather deep game shelf, if you've got any that you think would make good stripping games which I haven't used, let me know!

Well, Red, a lot of what gets used for striping games hereabouts wouldn't fit your format requirements, because they take hours to complete. However, I do have one suggestion which would:

*bring back a game you haven't used in five years;

*both reduce the "sudden death" aspect in your early clip and eliminate the interminable delay before anybody removes even a single item of clothing;

*encourage some of your less forthcoming players to possibly answer embarrassing questions they've avoided in past interviews;

*almost guarantee that something entertaining will happen with every move over the entire game!

What I'm suggesting is the "Truth or Dare" version of the game you call "Jingo". I don't believe the commercial version of the game is currently in production, but they can still be found on eBay or other online sources -- or, you can convert your standard Jingo tower into what's needed by using red and black felt-tip markers to color the short ends of the blocks: 1/3 of the blocks red on both ends, 1/3 black, and the rest stay blank.

Gameplay is standard Jingo, with the following modifications: player picking a red block has to perform a dare (small forfeit) before putting the block on top of the tower; choosing a black block means the truthful answer to a question; take a white block instead of either of the others, and remove an article of clothing. Refusing a Truth or a Dare requires the player to lose an item of clothing instead. Toppling the tower before there are sufficient losers in the game is still a 'sudden death' ending for that player, removing all remaining clothing. BTW, when the tower is first assembled, each layer should include one of each color block, in random order - this pretty much assures that blocks of each color will be chosen over the course of the game.

I think you'd really want to replace all of the questions and dares on the commercially-released game, since they're all pretty lame by Lost Bets standards. I'm sure you, your players, and your fanbase would be able to provide dozens of potentially embarrassing questions and simple dares/forfeits, which could be compiled on a list for a designated spector to use. This spectator would then select items that were appropriate to the situation at hand: for instance, waiting to use a "5 jumping jacks" dare until the player was sufficiently exposed to make the dare entertaining for the viewers.

The way I see it (and from much past experience playing this version of the game), this offers a chance to push the limits of some of your shyer players, since they'll have to make an on-the-spot decision as to whether to accept a forfeit (or answer a question) they'd (generally) rather not, or lose a crucial piece of clothing instead which brings them one step closer to being one of the ultimate losers.

The challenge will be to find a final forfeit that's significant enough to 'cap' the overall game experience, which has been filled with lots of little, very soft dares as the game's progressed, and still be something your 'tight-limit' players would be willing to risk, although paddling or WAM are certainly possibilities (being fairly sure that tickling will get used up on the 'dare' blocks over the course of the game).

Hope this is useful for you - it's been our go-to game for years when we haven't had the time for a more marathon game session.

PS I'll go digging deeper into that game shelf and re-think whether on not anything else might by adaptable for your marvelous films.

I am also all for a litle more variation the way the losers and forfeits of the games are determined. You did some nice ones in the past (like the series when Courtney and Mallory played for 4 forfeits in 4 games)

Most of the games follow the same format, strip until one naked player loses again, play until the number of losers is reached.

Some ideas:
* suprise forfeits where the loser reads the forfeit from an card in envelop
* losers have to compete and ultimate loser gets an extra forfeit/penalty (ie wet t-shirt contest, boob shaking contest, orgasm race ect.)
* random forfeit, pick an envelop, spin a wheel ect.
* sudden death forfeits, where a specific dice roll or card means instant complete strip and do the forfeit immediately (get grabbed, masturbate for crowd, ride sybian ect)
* games where players don't strip but lose tokens or spell words (W.H.O.R.E.S. or B.O.O.B.S.) and stripping / being stripped is part of the forfeit rather than the game
* "winner can do what he/she likes" forfeits or "loser gets fucked" forfeit (preferably one loser)


Some you did already, some i haven't seen yet (sudden death style-games,random forfeit).

Most can be combined.


Here's one little example of the "sudden death" and "loser gets fucked"combi, that might be nice for the players from the big parties.

Four guys each represent one suit (hearts, spades, diamonds, clubs). A group of girls (minimal 5) in turns picks a card from the deck.
If a girl draws an Ace, that girl is out of the game (wins) as well as the guy whose suit it is(lose).
But, the girl who draws the final ace has to strip right away and gets fucked by the guy whose suit was left.

how about a betting wheel with a mixture of dares and strip spots?

Each player spins the wheel and does whatever it says. If they have already performed or removed the named piece of clothing they get a bye.

You get the idea.

how about a straight up catfight where the first girl to be stripped naked and be handcuffed loses.

forfeit idea: how about using the doorjam cuffs, but attaching them to aa open beam or something like that, allowing the camera to view 360.
ankles could be secured to a spreader bar.

Just watched the double slingshot vid, it was HOT! Any chance of using HD cams for the walk of shame parts in the future. It's like the vid goes from HD to VGA once the walk starts or something. Otherwise, awesome vid!

Hi Red,
today i have a complain, I don't want to be rude. But I am sort of annoyed with the quantity of tattoos and extensive body piercing in last two clips I've bought. I have to admit that the large tattoos and lot of piercing in eyebrows, nose etc is real turn-off for me:(

Such a video is useless for me, can you pace some sort of warning for such "body modifications" in clip description. I have similar problem with "full-grown" bush.

Nevertheless lostbets.com is my favourite site, and I am the great fan of it.

at first I have to say, that you've done great work again.

At second, I have an idea for a game/forfeit: You need four girls. They play in a first round, until there are 2 losers. The naked girls get some nipple clamps and become the "forfeit-girls" for the 2nd round. In this 2nd round compete the winning girls i.e. in a quiz game. For each correct answer, the opponents forfeit-girl gets some weights attatched to the clamps, for each wrong answer the own. To guarantee, that the winning girls play serious, the loosing player and her forfeit-girl should get an extra fofeit at the end - I think of some clamps in another interesting area a little bit deeper.

Nice work with the videos they are great. Just a quick suggestion for you. I think a food related forfeit has not been done in a while. It would be nice if it could make a comeback with possibly a old or new game for the gals to play.

Another idea for a forfeit is have 4 girls and 2 losers.

The 2 losers then jerk off two male volunteers onto some food. The girl who makers her guy come second loses and must eat the food.

Also nude-in-public.com used to do games in public places like bars for example stripping to full nudity - maybe its not possible where you live due to legal issues though. Sadly they stopped the games some years ago on that website.

Red, I'm a DVD distributor. Send me an email at boulevarddist@yahoo.com if you would like to discuss DVD Distro to wholesale.
Thanks
Andy Goode