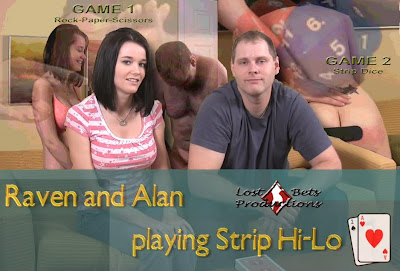 If Raven had known how hard Alan was going to spank her in game 2, I don't think should would have been so tame with her posing of Alan in game 1. With her buns still stinging, will she get some measure of revenge, or will Alan add to Raven's shame?? Game 3 is now available at the store, and this time it's Hi-Lo with handcuffs and a feather tickler in store the loser.
Posted by Crosis at 7:41 AM

In general I think the winner should be allowed to put whatever clothes they lost back on before implementing the forfeit. Jack.

I appreciate how the handcuffs are used in a discrete way. Things like handcuffs, blindfolds, ROPES, etc. could make a clip look a bit like a light bondage scene rather than just a forfeit where you want the loser to keep their hands away. The handcuffs are doing the same thing as if someone were there holding on to the losers arms.

Have you considered using saran wrap/cling wrap as another way to hold their arms down? The loser holds their arms down at their sides and the others put a few wraps around their waist and arms. The loser can be restrained and look silly at the same time.

I haven't seen this clip yet but the forfeit sounds like one of the best so far. Pity I'm not so into the co-ed games (sorry Crosis!)

Same here...I'm sure some people dig the co-ed thing, but not this former Baywatch star...

Jack, there's a dilemma with your suggestion. While I agree that having one naked person with one (or more) fully dressed adds to the tension. However, I think I once joked about instituting a "Mary" rule, to prevent her from putting her pants back on after she wins (such a shame to cover some things up). Perhaps a compromise of the winner gets to put one piece back on during the forfeit (where applicable).

Gordon: and just what's wrong with light bondage?? ;) Ropes are good when used properly, but they involve a great deal of trust between the players. I do know that Red did go on a fun shopping trip where bondage implements were purchased. I like the saran wrap idea (chalk it up to missed opportunities).

Silent one and Ha$$elhoff: Fair enough, to each his (and/or her) own. Luckily enough, we have a large stock of girl against girl games. However, out of curiosity, I would like to ask why you don't like the co-ed games. To me, the best sexual tension in a strip game almost always involves a male/female dynamic. I can understand not wanting to pay for a game where the girl doesn't show much (although some people love that game). However, if you passed on Raven and Alan's game of strip dice, let me just say (spoiler ahead), you missed one nice spanking of an even nicer ass. Just because Alan lost his clothes in that game shouldn't scare you away.

Keep the comments coming, we love to hear from all of you...

Considering the fact that I am a male, it is simply a turn-off to see a nude male thrown in with a lovely female. If I don't like nuts(no pun intended), why would I want them added to the brownie mix? I do appreciate all the fine girl/girl work you have done in the past, and will continue to purchase your vids, especially if you throw in more spankin' forfeits;)

I agree with Hasselhoff about the nuts and I don't think I could possibly have put it better!

Saying that, it is only because the site does spoil us with such a good variety of g/g games that the distinction is made. If there were only co-ed games, I would probably still love the site as I wouldn't know what I was missing!

down to the wire again this weekend, hope we're not disappointed

Well, i happen to like boy/girl games as, someone already said before, the sexual tension is better.

To me, bondage forfeits are the best and i would like to see a blindfold used once.

Hey guys, I'm not quite sure why this week's clip is not up yet. I do know that Red has been extremely busy with the non-LostBets side of life. He's usually pretty good about making sure the clip gets up, and I'm sure that once he is able to, we'll have another hot video.

Until then, I really want to thank you guys for offering your opinions. I find the differences in what turns people on very fascinating. I too am a straight male (with some interests that border on being "slightly bent"). Seeing another guys dangly bits doesn't really turn me on, but it doesn't necessarily turn me off. In a similar vein, watching two hot girls make out, can be very hot, but it doesn't turn me on nearly as much as seeing the same two girls working on guy.

For me, watching two girls alone, doesn't offer me a chance to insert myself in the fantasy. That, is the difference I believe. For some, watching the action is the turn on, while others try to insert themselves into the action. Someone could probably do a sexual psychological study about this. I'd do it, but I'd much rather watch videos.

In strip games, sometimes you lose. One of the hottest strip games I ever played, I lost (quite badly) against my girlfriend at the time and 3 other girls all of who I had dated and/or fooled around with in the past (but nobody wants to hear about that).

Ha$$elhoff, if you like spankings, I URGE you to re-consider Raven and Alan's 2nd game (strip dice). WARNING FULL SPOILER OF RAVEN VS ALAN -- STRIP DICE AHEAD
If you can handle the fact that Alan is naked for the last couple of minutes, I can assure you the game is worth it. Raven is naked much earlier in the game (and doesn't once cover her lovely chest), and does lose the final throw of the dice. Seeing her assume the position is quite hot, and trust me when I say that Alan did not hold back with the spanking. Now I've both given and received much harder spankings in my life (again, nothing you really want to hear about), but watching this one does make me wince.

Again, please accept our apologies for the delay in this week's clip.

What is up? We now have another week of a HD game without the SD of the previous weeks game being available. This week's is kind of lame considering it is of somebody who we have seen plenty of recently.

I have to agree with GB. I love lily, but it's starting to seem like her own personal website, especially if you particularly like girls shaved, lily is obviously proud not to fit in that category. I personally have been hoping and praying for another danielle game, especially with penny and samantha as she debuted in since we didn't get to see much of either of them

Okay, time to start replying to all these great comments I've been neglecting.

Jack: Well, I doubt that winner redressing will ever be "in general" -- it lengthens the clip and I try to avoid that -- the loser has gotten dressed in some clips and I'll make a point of letting her redress more often in the future. Thanks for the feedback.

Gordon: Saran wrap? You're an effing genius. That one is going on the "to-do" list with a big gold star next to it.

thesilentone and Ha$$elhoff: One of the things I like most about my customers is that most of them agree and understand that not liking every single clip is the price to be paid for variety. Sorry this clip wasn't to your tastes; here's to hoping you like others better.

GB and anon: I'm sorry you found this clip not to your liking. As I alluded to in my blog post "Um, hi guys", I've been kind of phoning it in lately. This is inexcusable, but I hope you'll excuse me anyway.

I'm aware that Lily is becoming quite overexposed on this site. And I'm also aware that a significant chunk of my customers do not find her natural look appealing. I'll try to make her appearances less frequent. I definitely need some new local talent.

Hey I am wondering if we are going to see raven again in the future?